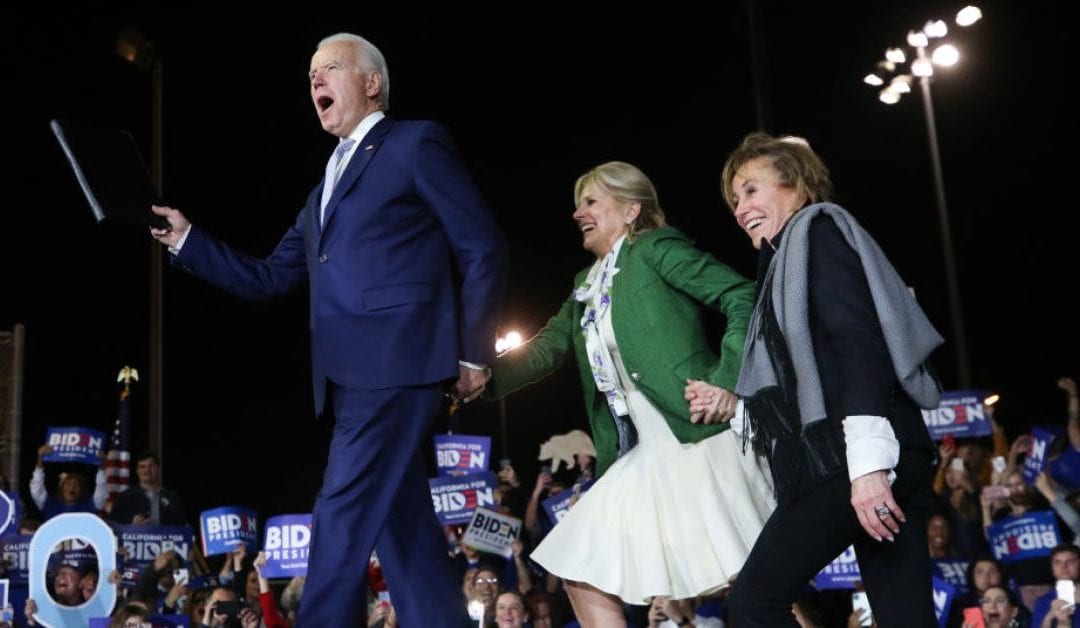 “I’m above the ground,” Joe Biden said in Los Angeles the morning of Super Tuesday. The Democratic presidential candidate gripped a styrofoam cup of ice cream in his left hand, the city’s mayor looking over his shoulder, a crowd of locals pressing in around him. “You’ve not yet buried me yet,” he added with a crooked grin. “I’m not dead.”

Far from it. On the biggest day of voting in the 2020 Democratic primary, Biden’s presidential hopes came roaring back to life. The March 3 elections in 14 states and American Samoa capped a whirlwind few days that reordered the Democratic primary, catapulting Biden back into contention and potentially ahead of Sen. Bernie Sanders in the delegate count, depending on the full results of primaries in California and Texas, the two biggest prizes of the night.

The result sets up a pitched battle for the party’s nomination between two starkly different candidates and visions for the future: a contest between Biden, a former Vice President with broad support among moderates, African Americans and Democratic officials, and Sanders, an independent democratic socialist with a grassroots army that has diversified this election cycle to encompass growing numbers of Latinos. Depending on the outcome of Super Tuesday and the delegate-rich primaries over the next two weeks, the pair could be forced to slug it out all the way to the party’s convention in Milwaukee in July. Biden’s allies, however, hoped that his momentum would become unstoppable and Sanders would continue to fade.

It was a prospect that scarcely seemed possible even a week ago, after Sanders won the most votes in the first three contests in Iowa, New Hampshire and Nevada, prompting some observers to declare him the prohibitive front-runner. But after a brutal start, Biden’s resounding win in the Feb. 29 South Carolina primary set off a rapid chain of events—the withdrawal of two top rivals, who threw their support behind him, and a raft of other key endorsements—that cemented him as the Democratic establishment’s pick to take on Sanders.

The results on Super Tuesday ratified his surge. As of late in the evening, the former Vice President had won Alabama, Arkansas, Massachusetts, Minnesota, North Carolina, Oklahoma, Tennessee and Virginia. Many of his victories appeared to be by large margins, enabling him to sweep up large swaths of delegates, which are allocated proportionally to candidates that receive at least 15% of the vote.

Sanders was projected to win California, Colorado and Utah in addition to his home state of Vermont. Texas was too close to call with about 60% of precincts reporting, and Sanders and Biden were also locked in a tight battle in Maine.

“They don’t call it Super Tuesday for nothing!” Biden exulted as he rallied supporters in Los Angeles Tuesday evening, flanked by his wife and sister, whom he momentarily confused with one another. “People are talking about a revolution? We started a movement!”

Two more major candidates, Elizabeth Warren and Mike Bloomberg, struggled to pick up delegates, squelching their hopes of a comeback and raising questions about whether they would remain in the race. Bloomberg, the billionaire former New York mayor, had spent more than half a billion dollars building a massive, Super Tuesday-focused campaign operation, but ended up winning only the territory of American Samoa—good for four delegates. And while Warren had professed to be in it for the long haul, she couldn’t even manage to win her home state of Massachusetts, where she appeared on track to finish third.

“Was this not exactly what I told you was going to happen?” a senior Biden campaign official joked. But nearly as stunning as the speed of Biden’s turnaround, from left for dead to back on top, was the fact that it didn’t seem to be the result of anything the candidate himself did. Instead, the party came to him.

Biden made some changes to his campaign after his fourth-place showing in Iowa on Feb. 3, only to fare even worse in the next contest, coming in fifth in the Feb. 11 New Hampshire primary. He came in second in the Feb. 22 Nevada caucuses but earned just 20% of the vote and 9 delegates there.

Biden’s debate performances continued to be decent but uneven, and his campaign was in danger of running out of money. He couldn’t afford to place major advertising buys, build out a ground game or even poll the Super Tuesday states. But he benefited from events outside his control. Bloomberg’s poor debate performances discouraged moderates still looking for a deus ex machina. And Sanders’s early successes alarmed rank-and-file Democrats looking for a nominee who could steer toward the center in November.

All the while, Biden kept insisting that the largely African American electorate of South Carolina would stick with him. And in the end, with an assist from the endorsement of influential South Carolina Rep. Jim Clyburn, they did. Biden’s nearly 30-point South Carolina victory opened the floodgates. He raised $15 million in three days and saw his two main rivals, Pete Buttigieg and Amy Klobuchar, drop out and endorse him, along with a parade of Democratic Party elders and elected officials.

Exit polls indicated that Biden’s strongest voter demographics, African Americans and older Democrats, provided the base for his victories, bolstered by a late-breaking surge of educated suburban moderates. An unusual proportion of the electorate, more than 40%, told pollsters they made their decision of how to vote in the last few days, an indication of the uncertainty and angst that have marked this primary as Democrats grapple with the existential question of how best to take on President Trump in November.

Sanders worked hard to expand the passionate movement he began to build in 2016, reaching out to minority voters and making his own electability pitch based in large part on his strength among young voters. But turnout to date has not supported his contention that he can vastly expand the electorate, and voters in most of the Super Tuesday states appeared unconvinced. Exit polls showed voters prioritizing a candidate they thought could win over one who agreed with their views by a 2-to-1 margin.

Votes were still being counted in California, the biggest Super Tuesday prize in terms of delegates, where Sanders hoped to run up the score. “I tell you with absolute confidence,” he told a cheering crowd in his hometown of Burlington, “we are going to win the Democratic nomination.” He proceeded to draw a sharp contrast between his record and Biden’s, pointing out their divergent positions on the Iraq war, entitlement cuts, “disastrous trade agreements” and consumer protection.

Sanders’s grassroots fundraising remains unparalleled: the campaign announced it had raised $46.5 million in February from more than 2.2 million donations. His backers argued he would benefit going forward from a one-on-on contrast with Biden, which they said would illuminate the policy differences between the two men. “What we have is a two-person race,” New York Mayor Bill de Blasio, a Sanders supporter, said on MSNBC.

Sanders’s strong base and delegate haul still gives him a shot to win the nomination. But Tuesday marked a dramatic shift in momentum. “Basically the entire month of February was a perfect storm for Bernie Sanders,” says Addisu Demissie, a California-based strategist who managed the campaign of Sen. Cory Booker. “And then the first three days of March were a perfect storm for Joe Biden and may have reversed all of that. It’s hard to believe how much has changed.”

Get our Politics Newsletter. Sign up to receive the day’s most important political stories from Washington and beyond.

Write to Molly Ball at molly.ball@time.com.