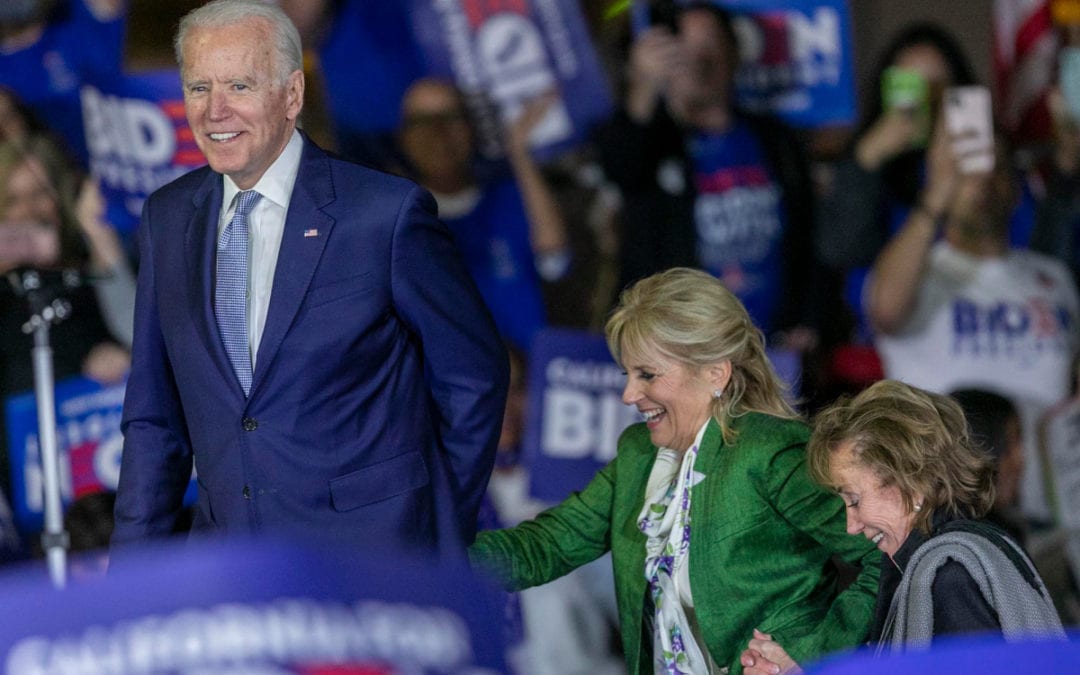 A week ago, his White House dream was on life support, but Joe Biden roared back on Super Tuesday — the former vice president racked up wins in at least eight states and put rival Bernie Sanders on notice.

“They don’t call it Super Tuesday for nothing!” crowed the jubilant Biden in an event at the Baldwin Hills Recreation Center in Los Angeles.

A cumulative 1,357 delegates were up for grabs on the most jam-packed day of primary season, which spread across 14 states that stretched from coast-to-coast and included American Samoa.

“Those who have been knocked down, counted out, left behind, this is your campaign!” Biden said. “Just a few days ago the press declared the campaign dead. And then came South Carolina. And they had something to say about it!”

They weren’t the only ones.

Within seconds of the polls closing at 7 p.m. local time, Virginia, home to 99 delegates, was called for Biden, giving him his first state of the night.

The triumph was expected for Biden according to the most recent polling headed into Super Tuesday, but even the rosiest projections failed to capture the extent of his Old Dominion dominance.

Biden tallied 53.2 percent of votes, more than doubling Sanders’ 23.1 percent, with 99 percent of precincts reporting, according to CNN.

The blowout was more than just a moral victory for the Biden camp, as delegates are dished out not on a winner-takes-all basis, but in proportion to vote totals to any candidate that clears the 15-percent threshold.

To clinch the nomination — and avoid a contentious brokering process at the Democratic National Convention in July — a candidate must get the backing of 1,991 total delegates.

Sanders responded with an equally resounding early victory in his home state of Vermont, good for the biggest share of 16 delegates, but the wins kept on coming for Biden.

North Carolina (110 delegates), Tennessee (64), Alabama (52), Oklahoma (37) and Arkansas (31) all broke Biden’s way, as strong voter turnout among the African-American community helped prop up his so-called firewall across the South.

But perhaps his most significant victories were upsets in Massachusetts and Minnesota.

The victory in the Bay State, packed with 91 delegates, was a crushing blow to Massachusetts Sen. Elizabeth Warren, who placed a disappointing third in her home state — a finish that left her campaign on the ropes.

Meanwhile, polls projected that Sanders would sink Biden in the Land of 10,000 Lakes after Minnesota Sen. Amy Klobuchar announced the suspension of her floundering campaign on the eve of Super Tuesday.

Despite her endorsing Biden on the way out the door, Klobuchar’s exit was initially expected to clear a path for Sanders. But Biden managed to pull off a Midwest upset, despite investing next to nothing in the state.

“We won Minnesota because of Amy Klobuchar!” Biden told his boosters in no uncertain terms. “We are very much alive.”

It wasn’t pretty and there wasn’t a moment to spare,…

He also gave shoutouts to ex-Texas Rep. Beto O’Rourke and former South Bend, Ind. Mayor Pete Buttigieg, like Klobuchar one-time White House aspirants who abandoned their own campaigns and coalesced around the last, best hope of moderate Democrats in 2020.

The last-minute boosts for Biden came as many within the party establishment feared that Sanders — a self-described democratic socialist — could run away with the race.

As Sanders’ momentum grew, so too did the dread among Democratic moderates and the party’s establishment that the Vermont senator’s left-wing policies and revolutionary rhetoric could not only undercut his electability against President Trump in November — but harm Democratic efforts to retake the U.S. Senate.

In addition to Vermont, he struck back in a big way out West, capturing California, the day’s biggest single prize with 415 delegates.

Sanders also romped in Colorado and Utah, home to 67 and 29 delegates, respectively.

In a raucous campaign event of his own in Essex Junction, Vermont, Sanders didn’t sweat the early returns.

“Tonight I tell you with absolute confidence we’re going to win the Democratic nomination and we are going to defeat the most dangerous president in the history of the country,” said Sanders.

Nor did he signal any willingness to blunt the pointed politics that landed him in moderates’ crosshairs.

WASHINGTON — Mike Bloomberg’s White House bid may be on…

“We’re going to win because the people understand it is our campaign, our movement, which is best positioned to defeat Trump,” he said. “You cannot beat Trump with the same old, same old kind of politics.”

Where Sanders’ all-in approach buoyed him with his base, Warren limped through a nightmarish Super Tuesday as the race increasingly looked like a two-horse race.

Warren’s third-place finish in her home state was actually her most successful outing of the night, as she was on pace to pocket 10 Massachusetts delegates, RealClearPolitics projected as of 11 p.m.

She also picked up a single delegate each in Colorado and North Carolina, but was shut out elsewhere.

Former New York Mayor Mike Bloomberg — a late entrant who has reportedly poured over $500 million of his own fortune into the race — fared little better.

He won only American Samoa, and was projected by RealClearPolitics to pick up a handful of delegates elsewhere, topped by eight from Colorado.

Hawaii Rep. Tulsi Gabbard, forging ahead despite not even earning a debate invite for months, was blanked nationwide, according to the site.