It’s unclear if Colorado counties can legally evict visitors to slow coronavirus. But one is doing it anyway. 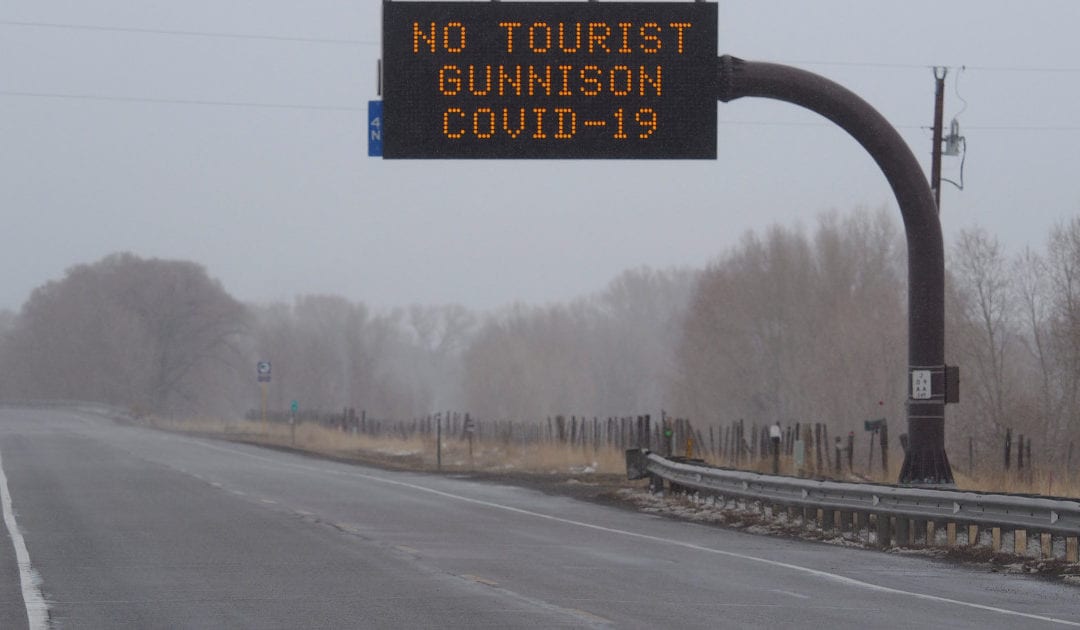 In the midst of a pandemic that has bashed Gunnison County with a sledgehammer of illness, county officials are now facing a Constitutional furor over the rights of second homeowners during a public health crisis.

The debate erupted when Gunnison County took the unusual step on April 3 of ordering the owners of around 4,000 second homes to stay out of the county of 16,000 residents if they are elsewhere, or to leave the county if they are currently in their second homes.

Does this violate the U.S. Constitution? It depends on whom you ask.

“Grossly,” said David McDonald, an attorney with the Mountain States Legal Foundation. “This violates the rights of Americans to travel freely. And it feels like a rather knee-jerk reaction.”

“No,” replied Town of Crested Butte attorney Barbara Green. “There is police power to protect the health, safety and welfare of the people.”

Other counties and municipalities around the state and the country have taken actions to limit visitor access to areas coping with large outbreaks of COVID-19. Southern California’s Mammoth Lakes is seeking state approval to set up roadblocks outside the resort community to turn away all but local residents. Most Colorado resort communities with high percentages of homes owned by out-of-town owners — like Breckenridge, Steamboat, Vail and Aspen — have urged second homeowners to not visit but stopped short of an outright ban.

In Aspen, health officials have signage at the airport and on Highway 82 into Aspen urging all second homeowners who are arriving to self quarantine for 14 days.

“We do have the order in place to discourage travel by second homeowners … but in a sense, it’s kind of toothless,” said Bill Linn, a spokesman with Pitkin County’s emergency incident team. “It’s not like we are going out and checking IDs and tax records to see if they own a home. But we are reminding them of their social obligation to protect us by self-quarantining.”

But Gunnison County, with one of the highest per capita rates of infection in the nation, took it a step further by asking second homeowners to pack up and get out.

That order appeared to be softened Friday when the county approved 199 requests for exemptions from second homeowners who are being allowed to remain in their homes because they were already in residence March 14, when the ski lifts were shut down due to COVID-19, the illness caused by the coronavirus. All exemption requests from second homeowners wanting to travel to Gunnison County have been denied because all nonessential travel into the county has been banned.

The rationale behind the county’s stringent orders is that Gunnison County’s 24-bed hospital, which doesn’t include an ICU, already faces being swamped with COVID-19 cases even without a significant population bump from second homeowners. On Friday, Gunnison County had reported 101 confirmed cases of the coronavirus and two deaths.

The order also states that keeping second homeowners out of the county now would ease the burden on food supplies and other non-essential services.

The order threatens violators with a $5,000 fine and up to 18 months in jail. But local law enforcement has been urged by the county to place education – and warnings — before enforcement.

The second-homeowner-go-home portion of the pandemic rules created a local uproar, with some second homeowners threatening to ignore it and some locals causing confrontations when they were snapping photos of out-of-state license plates to report to authorities.

The debate blew up online and in letters to the Crested Butte News. All the back-and-forth caused editor Mark Reaman to open his weekly column with the observation that “Stress doesn’t always bring out the best in people.”

Rob Harper with Toad Property Management in Gunnison County said he has not heard from any homeowners complaining about the order.

“I personally think it is appropriate given the situation,” he wrote in an email. “People need to be patient and allow this to work itself out.”

Texas Attorney General Ken Paxton ratcheted the brouhaha up and put a national spotlight on it Thursday, when he sent a letter to Gunnison County Department of Health and Human Services director Joni Reynolds. The letter warned that her order — in a county where many Texans own second homes —  is discriminatory and violates the U.S. Constitution.

The letter does not threaten legal action, but it does call for “immediate attention to this matter.”

Gunnison County public information officer Andrew Sandstrom said Friday the county is working on a response to Paxton. He would not say how county officials view the pressure from Texas.

“It (the order) isn’t just for our safety,” Sandstrom said. “It is also for our visitors’ safety.”

Gunnison County Attorney Matthew Hoyt reiterated the sentiment in a letter back to Paxton Friday afternoon that noted, among other things, that Paxton’s office on March 27 “recognized that Texas law ‘allows municipal and county officials to control the movement of persons and the occupancy of premises in a local disaster area.’

“This is precisely what Gunnison County is attempting to accomplish with its order under Colorado law,” Hoyt wrote.

Paxton could not be reached for comment. He has taken his complaints about Gunnison County’s orders to Fox News. Paxton has also been behind the recent legal battle in Texas over whether abortions could be banned in Texas during a health crisis. Paxton prevailed in that matter.

McDonald, the Mountain States Legal Foundation lawyer, said he foresees lawsuits over Gunnison’s orders on a number of constitutional grounds.

Green agrees there likely will be legal challenges to Gunnison’s orders and to various travel-restricting orders across the nation.

“Believe me, there are going to be lots and lots of test cases around the country,” she said.

Mark Kogan lives in Eagle County’s Avon, where a public health order discourages visits from second homeowners. He also has a house in Scottsdale, Arizona. He has no problem with communities urging second homeowners to stay away from their vacation spreads in rural communities where there are limited medical services.

“I don’t begrudge someone coming to Scottsdale. We have an urban food supply and a huge health care system. But people who go to Vail thinking it’s safer are putting themselves and locals in danger because there are so few hospital beds,” Kogan said from his Arizona home this week. “That said, you can’t really prevent somebody from visiting their home. I just hope people use common sense and logic and recognize we are all in this together. I think there is a legal question and a moral question here and sometimes legal and moral do not intersect.”

It’s been 16 years since the Northwest Colorado Council of Governments studied the economic impact of second homes in resort communities in Summit, Pitkin and Eagle counties. That 2004 study showed second homeowners directing more dollars into local economies than skiers. And the second-home economy has only grown since then in Colorado’s high country, with the growth stressing local housing markets and pushing home prices beyond the reach of many local workers. At the same time, second homeowners drive impressive non-profit spending in resort towns, where local charitable groups often thrive on the benevolence of part-time visitors.