It’s the time of year for barrel-aged beers in Colorado, but not all are turning to the dark side 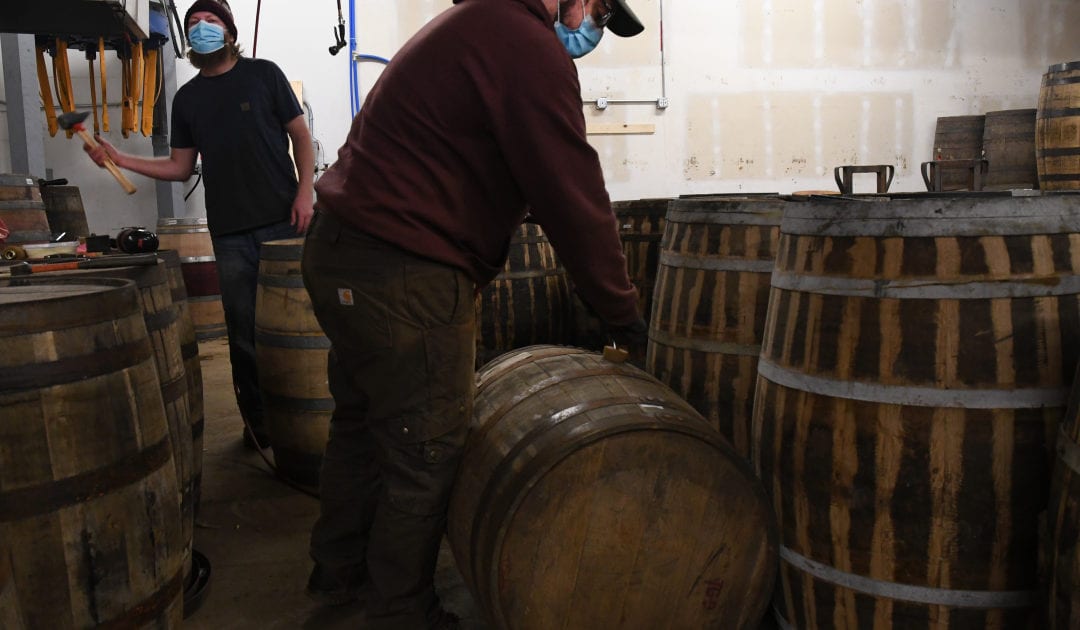 WHEAT RIDGE — Skyler Weekes holds the zebra striped barrel on its side and leans his nose close to the opening. “Oh man,” he says, “have a smell of that.”

Boozy raisin and vanilla aromas, touched with a soft fruit note, explode from the French oak barrel that aged cognac for 27 months.

All around him, hundreds of barrels and casks are stacked high inside Rocky Mountain Barrel Company’s warehouse in Wheat Ridge. Weekes, the CEO and president, spins in a circle as he points to the different barrels that once held cabernet sauvignon, chardonnay, whiskey, bourbon, rum and more.

This is where great Colorado beers take shape. Half of the barrel broker’s customers are local breweries that use the vessels to age beers that range in style from rich stouts and porters to effervescent sours.

For smaller breweries, which account for the majority in Colorado, the barrels create a means for experimentation and the ability to appeal to consumers who are always chasing new flavors.

“I think people really seek those out,” says Josh Grenz, the co-owner and head brewer at Verboten Brewing and Barrel Project in Loveland, which buys barrels from Rocky Mountain Barrel Company. “The people that love them love them. It’s kind of like the people who seek out IPAs — there’s almost like a cult following.”

The small-batch barrel-aged beers — particularly dark stouts and porters that match the dark days of winter — are a bright spot that defies other trends in the beer industry.

In recent years, the increase in consumer interest for fruity IPAs, low-calorie beers and hard seltzers put a dent in production of barrel-aged styles that are more complex in flavor and more expensive to make. The coronavirus pandemic and economic downturn have added their own dropoff as many beer drinkers turn to budget-minded brews and those easy to find in one stop at the grocery store.

The limited availability of barrel-aged beers from smaller breweries still drives consumer interest. But the pinch has hit larger brewers most.

Andy Parker, the barrel herder at Avery Brewing in Boulder, says it’s tough to sell a 22-ounce bomber of a barrel-aged beer produced at a large scale at the higher price levels. Earlier this year, Avery forged a new path with Night Warden, a barrel-aged stout in 12-ounce cans with big flavor at a lower price. “Especially in COVID times, when people are price conscious, it’s hard to walk into the store and spend $20,” he says.

“The IPA wave and the hard seltzer wave really took hold,” he says. “We are just waiting for COVID to get over and get people back in the breweries and hopefully we’ll start seeing more breweries (call).”

How a barrel influence a beer’s flavor

The barrel is rooted deep in beer history, whether used for fermentation, aging or transport, according to Peter Bouckaert, the co-author of “Wood and Beer: A Brewer’s Guide.”

“The technique is very old, but we don’t know how old,” says Bouckaert, a brewing legend from Belgium who worked for Rodenbach brewery and then New Belgium in Fort Collins.

He now leads Purpose Brewing and Cellars in Fort Collins, a small-batch craft brewer that specializes in sour barrel-aged beers. All barrels enhance the beer, whether through the wood, the flavors imparted by the prior liquid or the oxygen exposure, he explains. The most common is the bourbon barrel thanks to the so-called bourbon boom and the fact that distilleries can only use them once, per federal law.

A beer typically takes longer to develop in a barrel and often the recipe is designed to age and harmonize with the flavors imparted by the barrel, whether vanilla, tobacco or licorice. Often brewers will add other ingredients to barrel-aged beers, such as maple syrup, peanut butter or chocolate to further amp the flavor.

But the barrel affects change based on the type of barrel and beer styles. “Any time you put something in a barrel, you’re not in control anymore. You’re just guiding the flock,” says Parker at Avery. For brewers and consumers, he says “the chaos factor is a little more exciting and sexy.”

Not all barrels are alike. The big-name distillers — such as Heaven Hill and Buffalo Trace — are the most in demand from brewers and competition for the barrels is becoming tough. “These distilleries are getting calls left and right to get these barrels,” says Mike Smith at Goose Island, which is owned by Anheuser-Busch, which operates a brewery in Fort Collins. “They are getting harder to find.”

Goose Island makes the much-acclaimed Bourbon County Stout, and the 2020 editions highlight special Old Forester and W.L. Weller 12 Year barrels. The brewery is able to get the barrels “as a result of building relationships with a lot of distilleries,” says Mike Siegel, the research and development manager at Goose Island. He adds: “Working with the best distilleries is always our goal.”

The dynamic is one that Weekes sees at Rocky Mountain Barrel Company, a broker that sells about 80,000 barrels across the globe each year.

“Everybody’s done a bourbon barrel-aged stout, so they are trying to figure out how to one up each other a little more,” he says. “Is it a crazy kind of bourbon that has a different flavor profile? Or is it trying to use some of these other casks we carry from Spain or Portugal or Europe or something.”

Brewers make a name with their barrel-aged beers

The excitement about barrel-aged beer is what captured Grenz’s attention when he opened Verboten eight years ago. “It’s what I love as a brewer, it’s what we love drinking,” he says.

Now the brewery is known for its big stouts, like its current Not a Speck of Light series aged for more than a year in bourbon barrels.

In November, Verboten was one of six Colorado breweries invited to the annual Festival of Wood and Barrel Aged Beers in Chicago, its fourth time. The brewery took home top honors in the barleywine category for a beer aged in rye whiskey barrels as well as cognac staves.

“Using a barrel is just like an ingredient. You have to think of it in that sense,” Grenz says.

He adds: “It’s definitely a labor of love because it takes a lot of time and expense to do this.”