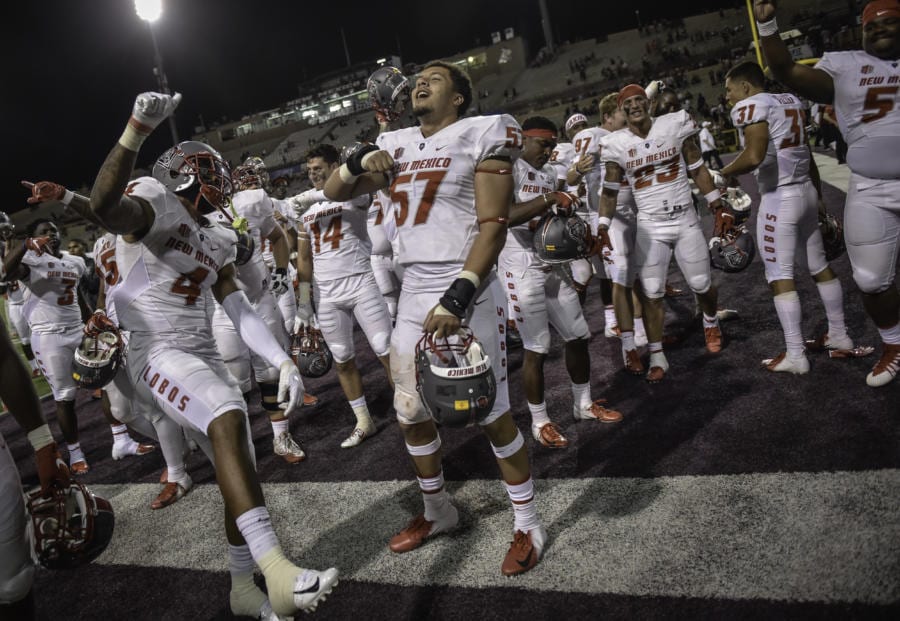 Lobo players celebrate in the end zone after defeating the Aggies in Las Cruces in 2018. (Roberto E. Rosales/Albuquerque Journal)

The Danny Gonzales coaching era for Lobo football has its start date.

The Mountain West Conference on Thursday afternoon unveiled the revamped 2020 football schedule, showing the Lobos will travel to Fort Collins, Colo., on Oct. 24 to play the Colorado State Rams.

The Lobos are 1-11 against the Rams since 2007 and former head coach Bob Davie’s Lobos teams were 0-8. But both teams now have a new coach — Albuquerque native and former Lobo Gonzales — and the Rams are now coached by one-time Boston College coach Steve Addazio.

As for home games, if they are allowed, the Lobos are scheduled to host San Jose State in University Stadium on Oct. 31, Nevada on Nov. 14, Wyoming on Dec. 5 and Fresno State on Dec. 12.

The Mountain West will have an eight-game schedule — four home games, four road games — for all 12 football-playing members with a Dec. 19 league title game on the schedule.

It remains unclear if New Mexico Gov. Michelle Lujan Grisham will allow the Lobos to play its four home games. As it stood on Thursday, the state’s public health order would still prohibit such a gathering. The Journal has asked the Governor’s Office for comment, but had not heard back as of this story being posted.

In August, the MW Board of Directors decided to postponed the football season until the spring (UNM originally was supposed to start the Danny Gonzales era with an Aug. 29 home game against Idaho State). The league cited in its August postponement concerns over the health of student athletes and others around their programs amid the ongoing coronavirus pandemic.

Last week, the same Board of Directors reversed course, citing advances in that month in affordable rapid testing availability that coincide with an announcement that the Mountain West will cover the tab on three tests per week for COVID-19 for all 12 football playing members and their entire football core group — including primarily players, coaches, trainers and staff directly in contact with the team (maybe around 140 per school).

Check back later today and in Friday’s Journal for more on the schedule rollout from the Mountain West.