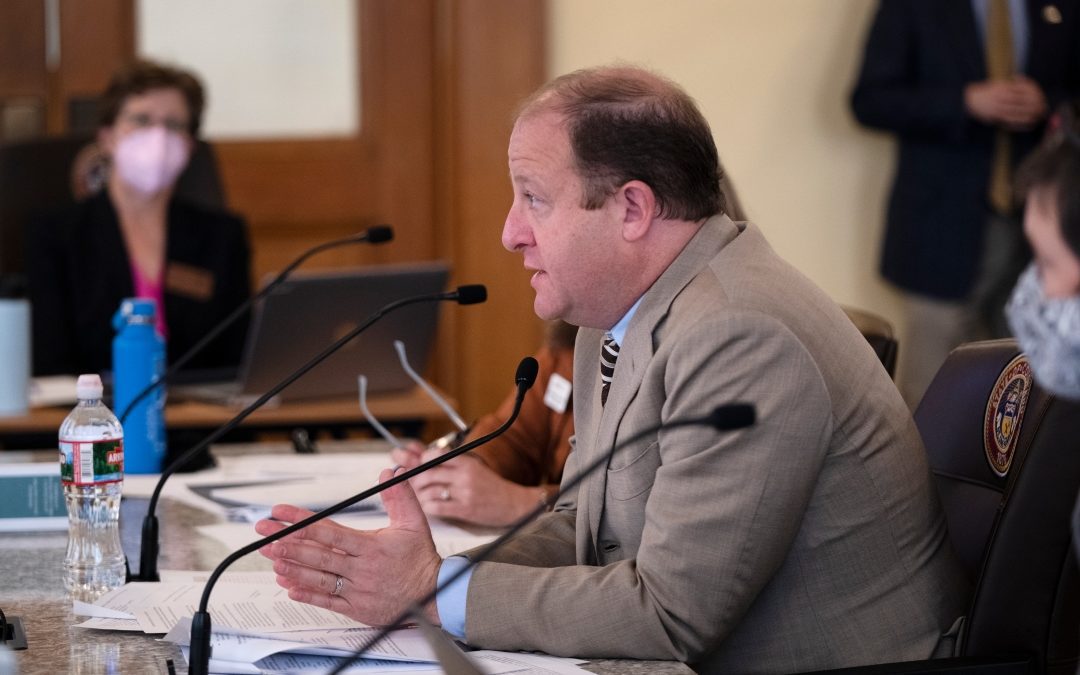 Colorado’s coffers are flush with cash right now — so much so that taxpayers are getting refunds. But Democrats see trouble on the horizon.

They’re not worried so much about a downturn, but the potential for spending on critical services like education and health care to run up against constitutional limits on how much tax revenue lawmakers can use.

Colorado Gov. Jared Polis is asking state lawmakers to set aside $1.8 billion to cover key spending for future years and help stave off what his budget chief described as a looming “structural deficit.”

By prepaying for certain government functions now, much of it with federal money, the governor aims to avoid spending more state revenue than TABOR allows in future years.

Lauren Larson, head of the governor’s planning and budgeting office, laid out the scenario to lawmakers earlier this month.

Under the Taxpayer’s Bill of Rights, or TABOR, state tax revenue can increase only to account for inflation and population growth, effectively limiting how much state money lawmakers can spend. Larson posited that without the pre-pay funding requested by the governor, state spending growth will outstrip that revenue cap starting in fiscal year 2023-24, and reach a $2.1 billion deficit by fiscal year 2026-27.

The issue invokes the chronic debate about TABOR’s constitutional restrictions on spending, which Democrats detest and Republicans defend. Democratic state Sen. Chris Hansen, a Denver Democrat who sits on the Joint Budget Committee, argued that the problem isn’t really new, but something that has limited necessary state spending for years.

“I think after decades of TABOR, we’re actually starting with a significant structural deficit going into this fiscal year,” Hansen said.

On the flip side is Republican state Sen. Bob Rankin, who also sits on the JBC, and who called the discussion about the spending issue “an attack on TABOR.”

In an interview with The Colorado Sun, the lawmaker from Carbondale argued that “we will have enough state revenue to spend right up to the TABOR limit,” adding that with billions of dollars in one-time state and federal money, “if we carefully plan those dollars, we can plan prosperity for the state for 10 years.”

Rankin believes the state should prioritize spending as much of the flood of one-time dollars now on catching up with prior obligations and investing in key projects like roads, bridges, deferred maintenance on state buildings, water infrastructure, wildfire mitigation and buying down the state’s debt on unemployment insurance.

He expects he’ll vote against at least some of the governor’s prepay plan, explaining that he doesn’t think it makes sense to spend money on ongoing government expenses through prepays funded with one-time dollars.

In an interview with The Sun, Larson disagreed with the characterization that her office raising the “structural deficit” issue is an attack on TABOR.

“It’s absolutely not an attack on TABOR,” she said. “It’s a fiscally responsible way to plan for the future.”

Larson described her office’s predictions as a matter of “pretty basic math,” explaining that, “if you look at historical growth in the general fund, it outpaces what we are forecasting the TABOR growth to be.”

Larson pointed to spending for things like K-12 and higher education, where expenses like salaries tend to grow more quickly than inflation as calculated by the Consumer Price Index, the standard used to calculate TABOR limits and which only tracks the prices of select consumer goods and services

But Rankin was skeptical of these arguments, and didn’t see why TABOR’s allowances for population growth and inflation couldn’t account for future needs.

“If we do it right, and don’t increase the long-term size of government,” Rankin said, “then I don’t think we have a structural deficit problem.”

Michael Fields, head of the conservative think tank Advance Colorado Institute, said that while he doesn’t think it’s a bad idea to stash money away for the future, he believes the structural issues raised by the governor’s office are overplayed.

“I think they wanted to put up a chart where there’s a structural deficit, when that just might not be the case in the future,” Fields said. “It’s something to look at, but I don’t fear that it’s going to be as big of an issue as they’re projecting.”

If lawmakers don’t end up approving the governor’s proposal to prepay $1.8 billion in future expenses, Larson warned “we could be looking at having to make significant budget cuts in order to meet our constitutional mandate for a balanced budget.”

She argues that the caps set by TABOR make it difficult for the government to deal with the ups and downs of the economy, limiting what state leaders can do in years where the state is flush with cash, and complicating efforts to plan and save for downswings in the future.

Hedges said she questioned the assumption that TABOR properly limited growth based on the state’s spending when voters approved the measure in 1992.

“What TABOR did is say that the right size of government was the size of government that we had in 1992, and I don’t know how they justify that,” she said. “I don’t know how they contend that just growing from the 1992 base is the right base, because the demand for what we need has changed dramatically since the 30 years when TABOR was adopted. I mean, we need to regularly update technology systems that weren’t even heard of or invented in 1992.”

Hedges also pointed out that the state must contend with a constitutional requirement to increase per student funding each year to keep up with inflation. State lawmakers haven’t kept up with that funding requirement over the years, resulting in what amounts to a multibillion-dollar IOU to school districts. The governor’s budget proposes making a dent in what’s called the “budget stabilization factor,” with $150 million this fiscal year, and $300 million over the next two fiscal years.

How exactly to stash away hundreds of millions of dollars for future use is still an open question.

The governor wants the state to hang onto the $1.8 billion for specific initiatives, like K-12 education funding and paying for Colorado’s new labor agreement with state employees.

Nonpartisan staff for the Joint Budget Committee say the simplest solution is to just keep the state money in the general fund. But they also suggested that lawmakers could put state money into a single “mitigating-cliff-effects” fund, instead of locking up money for specific expenses as the governor requested.

“If the General Assembly wishes to create a post-stimulus glide path, staff believes this would be best accomplished by creating a single fund that cannot be accessed until the future, rather than creating a large number of separate cash funds or complex out-year statutory appropriations,” JBC staff wrote in a report last month.

JBC Chairwoman Julie McCluskie, a Democratic state representative from Dillon, told The Sun she’s “still chewing on” the idea of stashing away $300 million for K-12 education in future years, but agreed with the general notion of planning for the future.

“I do think philosophically, given the unknowns we continue to face with the pandemic and the economic recovery, it’s important that we’re shoring up the budget, and we are acting responsibly with any of the expenditures we currently have on the books and going forward,” she said.

McCluskie said she expects a long-term solution to the problem will require “a much-needed and longer process” of working with political leaders and the public.

Polis told reporters earlier this month that addressing the structural issue “will require working with Democrats and Republicans on what is the best way people could vote to address that. But what we’re showing in this budget is, at the very least, we can make sure that’s not an issue for the next several years … which gives us several years to fix it.”