Is Colorado leading or lagging on climate policy? It depends on which states you’re comparing us to. 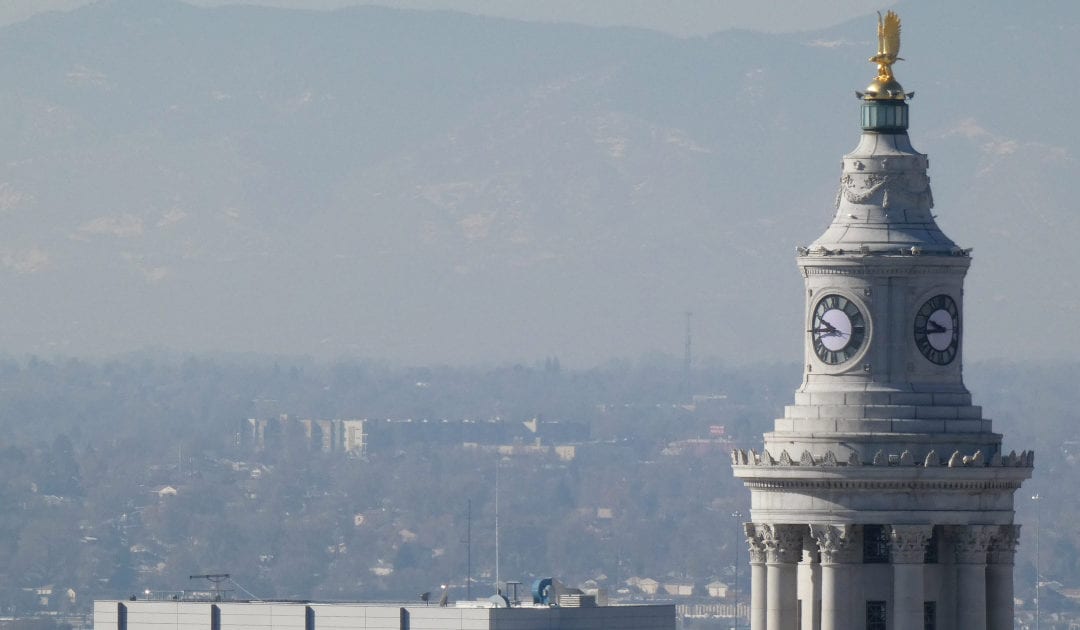 States from coast to coast – faced with President Donald Trump’s insistence that climate change is “a hoax” – are taking the lead in creating climate policy and programs, and in this multifaceted exercise Colorado is either a leader or a laggard.

On the one hand, the state has adopted some of the most ambitious climate laws in the county; on the other, critics say Gov. Jared Polis’ administration has failed to use the laws to their fullest.

“Look at Oregon, where Gov. Kate Brown is throwing everything and the kitchen sink to meet their targets … and look at Colorado and there’s a big difference,” said Pam Kiely, senior director for regulatory strategy at the Environmental Defense Fund.

Will Toor, executive director of the Colorado Energy Office, said he is proud of the administration’s work on climate change, pointing to rules on zero emission vehicles, curbing methane at oil and gas sites, limiting hydrofluorocarbon gases and getting a better handle on the greenhouse gas emissions in the state.

“This is going to be an iterative process and cannot be solved by one big rule or one agency. It will require an all-hands-on-deck approach from many state agencies,” Toor said.

The steps being taken are too few and too slow, said Jeremy Nichols, director of the climate and energy program with WildEarth Guardians. “We are not seeing the signs that there are big actions,” he said. “If it is iterative, let’s start taking those steps.”

The debate over how to reduce greenhouse gases, which are a driving force in climate change, is being waged around the country with states taking many different paths.

“In the absence of federal leadership, states and local governments have become the center of gravity on climate, particularly in the last three or four years,” said Devashree Saha, a senior associate at the Washington, D.C.-based World Resources Institute.

States have banded together in efforts like the Regional Greenhouse Gas Initiative, in which 10 New England and mid-Atlantic states operate a program to cap and trade carbon dioxide emissions from power plants.

Fifteen states, including Colorado, signed a memorandum of understanding in July to boost the market for electric medium- and heavy-duty vehicles and phase out diesel-powered trucks by 2050.

Colorado is also one of 10 states to have adopted California’s ZEV rule to promote the sale of non-polluting vehicles, such as electric cars.

The Colorado Public Utilities Commission, along with utility commissions in California, Nevada, Oregon and Washington, created the Joint Action Framework on Climate Change.

Thirty-two states have released climate action plans or are working on ones, according to the Center for Climate and Energy Solutions, a nonprofit think tank also known as C2ES. Fifteen states and territories have also passed legislation or taken executive action to move to 100% clean electricity.

“Colorado is right there in the top of the pack when it comes to ambitious reduction targets,” said Doug Vine, a C2ES senior energy fellow. “Putting the goals in statute rather than in an executive order is much stronger.”

In 2019, the legislature and Gov. Polis put in place laws to set a cost of carbon for power plants, targets for greenhouse gas reductions, and a reporting system for greenhouse gas emissions. They also required utilities regulated by the PUC to develop clean energy plans.

“The law was designed and written for bold action,” said state Sen. Faith Winter, a Westminster Democrat and co-author of the bill.

“When our state is burning, my daughter can’t run cross-country because of the air quality, firefighters are putting themselves on the line, our peach harvest is a mess, we need action,” Winter said.  “We want to see them move with a sense of urgency.”

While ambitious, the Colorado law differs in approach from other states in several key ways that speak to some of the criticism.

There is no requirement for a comprehensive plan in Colorado’s laws. The AQCC is given the job of issuing rules to meet the goals.

The Colorado’s Air Quality Control Division and the state energy office are working on a “Greenhouse Gas Pollution Reduction Road Map,” which will outline emissions sector by sector, assess the gap between what is already being done and what needs to be done to meet the state’s goals, and offer proposals and strategies to reduce emissions.

The roadmap, Toor said, will offer recommendations and potential legislation focused on meeting the 2025 and 2030 targets set in House Bill 1261.

In 2006, California became the first state to pass climate legislation and has been a leader in the field. It gave the California Air Resources Board the task of developing a “scoping plan” that would lay out in detail the actions to be taken to cut emissions.

The scoping plan has been revised three times since 2008 and is set for another overhaul next year.

Maine’s climate legislation, signed into law in June 2019, set a goal of reducing emissions from 1990 levels 45% by 2030 and 80% by 2050. It also created the Climate Change Council, which has to develop a four-year action plan to submit to the governor and legislature.

In July 2019, New York State passed climate legislation that created a Climate Action Council with the requirement of creating advisory panels on issues such as housing, transportation and energy efficiency, and developing a plan to cut the state’s emissions by 40% from 1990 levels by 2030 and 85% by 2050.

But no deadlines loom in Colorado

There are no deadlines or timelines in Colorado’s House Bill 1261. A requirement for the AQCC to issue draft rules to meet the reduction targets by July 1 was slipped into the bill on greenhouse gas reporting. The ACQQ did not meet that deadline and has been sued by WildEarth Guardians for missing the requirement.

California’s law set 12 targets between 2006 and 2020 for the air resources board to reach the goal of cutting greenhouse gas emissions.

In Maine, working groups created to advise the climate council on issues such as transporting and building infrastructure had to begin work in October and submit their reports in six months.

The council must deliver its action plan to the governor and legislature by Dec. 1.

New York’s climate council has two years to submit its plan to cut the state’s emissions and in Oregon, Gov. Brown’s March executive order gave the state’s Department of Environmental Quality until May 15 to submit a timeline for a series of rulemakings, including a cap-and-trade program.

New Jersey Gov. Phil Murphy issued an executive order in January giving the state Department of Environmental Protection two years to overhaul existing regulation and add new ones to curb greenhouse gas emissions. He gave the department 30 days to list existing rules that would be revised.

Toor said that meeting Colorado’s goals will require work across state agencies, and House Bill 1261 directs the air division to solicit input from other state agencies, stakeholders and the public.

Winter, however, called the process “opaque.”

New York state agencies are also using a “climate screen” in making all department decisions, said Peter Iwanowicz, executive director of Environmental Advocates NY and a member of the council. “We are trying to change the DNA of state government.”

Oregon created an interagency working group composed of 10 departments, the utilities commission as well as its Environmental Justice Task Force.

Colorado is moving to curb emissions sector by sector. It adopted the ZEV rule in the transportation sector, the methane emissions rule in the oil and gas sector and the hydrofluorocarbon rule in the building sector. (HFCs are used in air conditioners.)

Other states have looked to broader carbon pricing regulations, primarily cap-and-trade programs, which put a limit on total emissions and allow trading between sources (such as power plants and stationary engines).

California also issues sector-by-sector rules and uses cap and trade as a backstop to ensure targets are met.

A centerpiece of the Oregon climate initiative is a “cap-and-save” program covering major sources including industry, transportation fuels and natural gas use. The rule has to be in place by the end of 2021.

While Air Quality Control Commission members have raised the question of adopting such a backstop or backup, administration officials have not been receptive to the idea.

“We don’t believe it makes sense to start with a back-up,” John Putnam, director of environmental programs at CDPHE, told a commission climate subcommittee in August.

“We think that process is backwards and we should start with the policies we think we need regardless to get the deep reductions,” Putnam said.

Putnam questioned whether “planning around those worst-case scenarios is the best way to use energy and time that is limited.”

“We are in a climate crisis,” replied Elise Jones, an AQCC member and Boulder County Commissioner. “I think we are headed toward a worst-case scenario.”

The commission could then identify additional rulemakings for 2022, Putnam said, noting there were “relatively limited slots for rulemaking.”

This timetable leaves environmentalists frustrated. “We want to see them move with more of a sense of urgency,” Tellinghuisen said.

The Colorado climate bills appropriated about $816,000 for six staffers to work on the plans.

Putnam said in an interview that the state’s efforts are hampered by limited resources and any robust climate change program would need additional funding from the legislature.

The legislation creating California’s climate program included an implementation fee based on carbon dioxide emission from regulated sources. In 2019, the fee generated about $150 million which was used on state government climate programs.

The California Air Resources Board has about 150 staffers working on climate-related programs.

As part of her executive order in March, Oregon’s Gov. Brown sought $5 million in emergency funds from the legislature to jump-start the process.

Still, New York, Maine and New Jersey are, for the most part, all moving ahead with their climate plans using existing staff.

Despite all the activity across so many states, EDF’s Kiely said, “the big takeaway is that there is a gap between rhetoric and reality.”

“There’s been a lot of talk from governors,” she said, “but there is only one state in the country that has a policy framework capable of ensuring it hits its goals: California.”

To be sure, the way other states go about achieving their goals doesn’t necessarily have to be the way Colorado does, said KC Becker, the speaker of the state House of Representatives and a co-sponsor of House Bill 1261.

“We are always looking for a Colorado solution,” the Boulder Democrat said. “We just need a plan that is specific, comprehensive and enforceable.”

The roadmap, scheduled to be released at the end of September, followed by a month of public review and comment, may answer some of the questions and criticism.

“The governor’s climate roadmap is a leadership opportunity and now is a critical moment,” said Kelly Nordini, executive director of Conservation Colorado.  “It’s a chance to get on track to hit those targets if it includes concrete next steps that are verifiable, enforceable and equitable.”

“We have elected officials who ran and won on climate leadership so now is the time for them to act,” Nordini said.