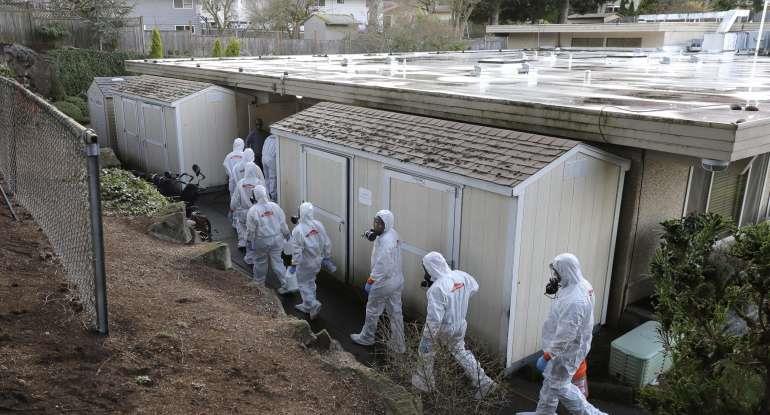 Iran’s Supreme Leader Ayatollah Khamenei has dismissed the coronavirus as “not that big a deal” but Iran’s Health Ministry has reported that 429 people have died of the virus, and the country’s deputy health minister has contracted the virus. New satellite imagery shows that mass graves in Qom, the mullahs’ spiritual center, are visible from space. This graveyard lends weight to the opposition party’s claim that the regime is underreporting the deaths and the number is closer to 1,500.

The images show the Behesht-e Masoumeh complex in Qom, about 80 miles south of Tehran, where the excavation of a new section of the graveyard began as early as February 21, according to satellite imagery. The digging rapidly expanded as the virus spread. By the end of the month, two large trenches — their lengths adding up to 100 yards — had become visible from space, the Post reported.

“But videos, satellite images and other open-source data from the cemetery — a vast complex six miles north of the city center — suggest that the number of people struck down by the virus there is significantly higher than the official figure,” the Post reported.

A senior imagery analyst at Maxar Technologies said the size of the trenches and the speed with which they were dug mark a clear departure from past burial practices involving individual and family plots at the site. Videos from Behesht-e Masoumeh cemetery posted on social media show the rows of graves and say they are meant for coronavirus victims.

In a video shared by the BBC’s Persian service on March 3, a narrator says, “This is the section for coronavirus victims. More than 80 [people] have been buried in this section so far, and they say only 34 deaths,” the regime’s official death toll on February 28.

One video mentioned in the Washington Post article includes the caption, “A worker told me that they must have buried more than 250 coronavirus victims so far.” The narrator walks across the cemetery grounds, pointing to new graves. “These are all graves and they are fresh,” he says. “These are all from the last few days. And as you can see, it goes on until the end.”

Iran appears to have handled the crisis extremely poorly.

London-based Iran reporter Hanif Jazayeri shared a video from Iran state television in which a mullah tells Persians to shake hands and kiss each other on the cheek, so as to spread the coronavirus more widely to make people immune.

These monsters are the reason why the #Coronavirus spread so rapidly in Iran. This mullah is telling ppl to shake hands & kiss each other on the cheek, hoping it would lead to more #COVID19 infections & eventually to people becoming immune.

Another state TV video involved claims that the coronavirus is an ethnic weapon that targets people based on their genes. The “expert” in the video claims that Italians and Iranians are more susceptible to the virus due to their supposed ethnic similarities.

Outrageous! Iran’s state TV claims #Coronavirus is an ethnic weapon that kills ppl based on their genes. Italy’s high death toll is “because Italian ppl’s genes are very similar to genes of Iranian ppl”. #COVID19