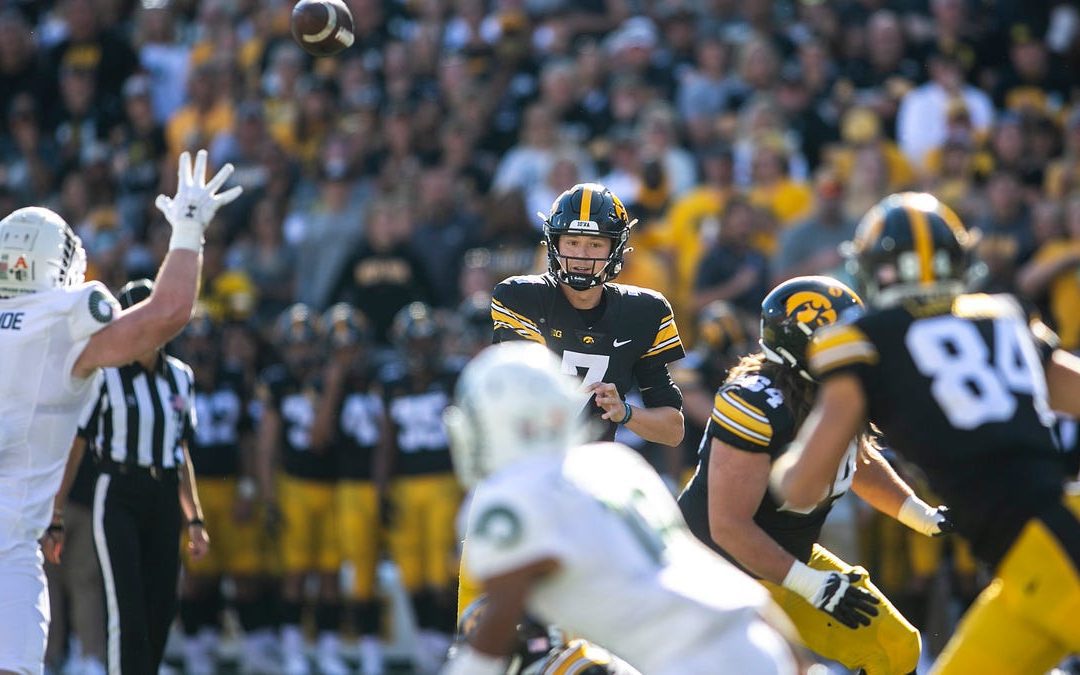 IOWA CITY — Hello again from Kinnick Stadium, where the weather has a strong football feel for this Saturday afternoon showdown. No. 6 Iowa (3-0) and Colorado State (1-2) get underway at 2:30 p.m. on FS1.

Hawk Central reporters Kennington Smith, Chad Leistikow and Dargan Southard, as well as photographers Bryon Houlgrave and Joseph Cress, will have you covered from pregame to postgame.

The Hawkeyes are looking to wrap up the nonconference schedule with another cruise-control victory, before diving into the meat of Big Ten action. Iowa is more than a three-touchdown favorite against a Colorado State squad that earned its first win last week at Toledo.

Follow along here all afternoon from updates, commentary and analysis.

And the Hawkeyes are back in front. After a key PI extended the Iowa drive, Spencer Petras finds a wiiiiide open Sam LaPorta for the 27-yard TD. The closest Colorado State defender was in Coralville.

In a matter of minutes, this game has totally changed. A fumble from Colorado State running back A’Jon Vivens recovered by Jack Campbell set up Iowa with a needed short field. One play later, Tyrone Tracy takes the end-around into the end zone for a 6-yard TD run. 14-14 here in a rejuvenated Kinnick.

Another possession, another three-and-out. Spencer Petras got lit up on a sack where the Colorado State defender went untouched the whole way. Hawkeyes could use a wake up soon before this really enters upset territory.

Rams cash in the costly turnover with a 3-yard TD pass to Gary Williams, and Colorado State takes the lead into the break. Hawkeyes outgaining Colorado State by nine yards, but it hasn’t mattered on the scoreboard.

A telling stat: Iowa surrendered nine third-down conversions in the first half, which is only three fewer than the Hawkeyes gave up through their first three games combined.

First major mistake this season for Spencer Petras, who throws his first interception of the season on a failed screen. Came right after Iowa’s offense was heating up. Colorado State’s Robert Floyd returns the pick 62 yards before being caught by Tyler Goodson. First INT for Petras in his last 163 passes.

What a drive from the Rams. Three third-and-long conversions, with the last one coming on Todd Centeio’s QB draw to paydirt. We’ve rarely seen Iowa’s defense carved apart like that this season. Colorado State currently 8-for-12 on third downs.

One decent run from Tyler Goodson, but that’s all Iowa can muster on its second possession. Spencer Petras was under pressure for one throw, then tossed another high intended for Sam LaPorta. Hawkeyes have just 29 yards on their first two drives.

Colorado State strings together a few nice plays to move into Iowa territory, but the drive stalls out after a fourth-down stop. Rams had a walk-in TD on the drive that QB Tony Centeio couldn’t complete.

The former Cedar Rapids Kennedy standout was already a rotational piece through the first three games, and will now get an even bigger opportunity against Colorado State.

Dargan Southard covers Iowa and UNI athletics, recruiting and preps for the Des Moines Register, HawkCentral.com and the Iowa City Press-Citizen. Email him at msouthard@gannett.com or follow him on Twitter at @Dargan_Southard.