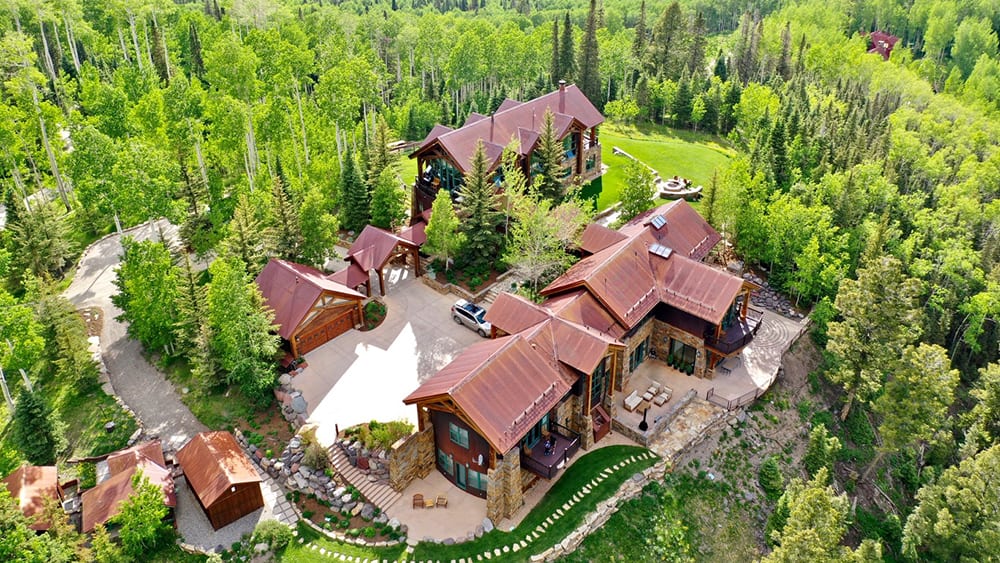 When you are award-winning film director Barry Sonnenfeld and you own a spectacular mountain-top ranch in Telluride, Colo., there’s one must-have feature you need to entertain family and friends: a private luge run.

“Everyone loves it. Tom Cruise, Jerry Seinfeld, Will Smith, they’ve all ridden on it,” says Patrick Pelisson, broker with Telluride Properties, who holds the listing for the $13.25 million home.

The thrill-ride runs just over a third of a mile, through woods and across creeks. Riders lay flat on a sled, face up or face down; expert riders will do it the professional way of face-up, feet first. Either way, it’s a blast, explains Pelisson.

Luging not your thing? Then the charmingly named Raspberry Patch Estate offers no shortage of alternate entertainment. Telluride’s ski slopes are a 10-minute drive away and downtown shopping is an easy 15 minutes.

As you’d expect from a film director, inside the main house there’s a state-of-the-art, 16-seat screening room with 4K digital projection. For the kids—big and small—a games room with pool table, pong-pong and pinball.

Better still, just hang out in front of the fireplace in the home’s jaw-dropping family room. Its huge windows provide unobstructed, top-of-the-world views of the 14,000-foot Mt. Wilson, the San Sophia Ridge, Gold Hill and Utah in the distance. The sunsets are breathtaking.

“The scenery is always changing, which is what makes it so special. You never get tired of the views,” says Pelisson.

Sonnenfeld, 67, best-known for blockbusters such as The Addams Family, the Men in Black trilogy, Get Shorty and Wild Wild West, purchased the home in 1998. He and his wife, affectionately known as Sweetie, have been living here full time for the past seven years.

It was designed by award-winning Colorado architect Michael Fuller and completed in 1994. Set on a 62.5 wooded acres, the home’s neighbors include comedian Jerry Seinfeld on the one side, and former Hewlett Packard CEO Meg Whitman on the other. In 2015 Oprah Winfrey paid $14 million for ski home close by.

According to Pelisson, the original main house covered 3,500-square feet and came with three bedrooms. In 2002, Sonnenfeld added another 7,000 square feet. Today the property has nine ensuite bedrooms, 11 bathrooms, plus a two-bedroom cottage for guests or staff.

Winding Raspberry Patch Road leads up the mountain from Highway 145 to the unassuming front door of this wood and stone lodge. The original main house is set above the other surrounding buildings so as not to spoil the near 360-degree vista.

The open-plan kitchen and living space.

The focal point of the home is that huge, glass-filled living and dining room. Dramatic wood beams support the steeply vaulted, wood-clad ceilings. The room flows into the open-plan chef’s kitchen with its twin islands for casual, family-style dining.

Stairs lead down to the lower level of the main house with its seven bedrooms, including the comfortably-spacious master suite.

The cozy office is where Sonnenfeld penned his newly-released book: Barry Sonnenfeld, Call Your Mother: Memoirs of a Neurotic Filmmaker. Like so many of the rooms in the house, doors open out on to terraces making the most of those spectacular views.

On another level of the home, there’s an indoor hot-tub. Steps away—on the outside—is a sunset-facing sunken fire pit with amphitheater-style stone benches.

Why have the Sonnenfelds decided to sell? Seems the couple has already bought a new home in Vancouver. In a recent Hollywood Reporter interview, Sonnenfeld said they fell in love with the city during the three years he was directing the Netflix show A Series of Unfortunate Events.

As for living in Telluride, the director said: “It’s beautiful, and I don’t do much. I don’t ski. I don’t hike. I walk the dog, and I read. And, as it turns out, I write a memoir.”

We’re betting he doesn’t luge, either. But you might.

Winter in Telluride could include your own luge run.