Inauguration Day protests at Colorado state Capitol turn ugly, but don’t get out of hand 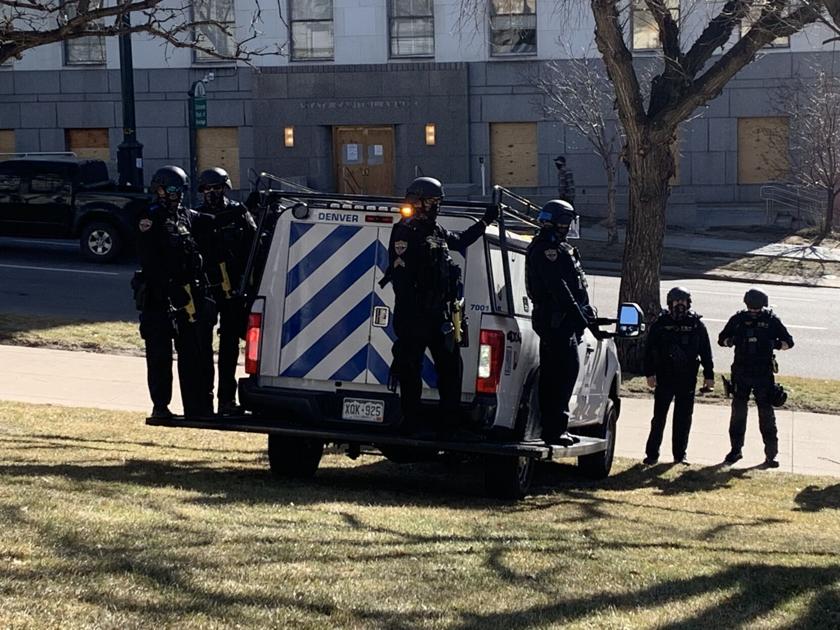 Inauguration Day at the Colorado state Capitol was a mix of happy pro-Biden supporters, anarchists and antifascists, and a few way-too-brave Trump supporters.

The morning started off peacefully enough; Denver police and Colorado State Patrol officers were almost nowhere to be found. The few people who showed up, including a colorful character calling himself “Colorado Captain,” complete with a Captain America-type costume, were there to celebrate the inauguration of President Joe Biden and the end of the presidency of Donald Trump.

“This man had the nuclear codes!” said Rick Bryant of Denver. He said he spent the last four years terrified, and said he was relieved now that Biden is president. Trump, he said, “was capable of anything! It’s over with, we can move forward as a country and put Donald Trump behind us.”

Among those who were at the Capitol early on to celebrate: 7-year old Brooklynn Ridgeway of Denver, who wore a T-shirt that said “My VP looks like me – proud brown-skinned girl.” Her mom, Robin, said Brooklynn looks up to Vice President Kamala Harris, who is biracial, as is Brooklynn.

“It’s a huge deal for me, that she has someone to look up to,” Robin said.

Colorado Captain salutes Brooklynn Ridgeway, and told her he’d have her back when she’s ready to take on the fight. January 20, 2021.

“I really like her because she looks like me, and she never stopped believing, even though it was hard to get to be vice president. I want to be just like her,” Brooklynn said.

One Trump supporter and two self-identified medics got into a shouting match early on. It was a sign of things to come.

Controversy between a Trump supporter and self-identified medics. (They’ve since distanced from each other, and things are back to being pretty quiet.) #copolitics #InaugurationDay pic.twitter.com/awQTj8HyiP

Around noon, a crowd of about 50 protesters, many identifying with the Communist Party, marched from Cheesman Park to the state Capitol, forcing police to close East Colfax Avenue during the procession. The marchers, many dressed head to foot in black, with gas masks, helmets and bulletproof vests, shouted expletives about both Trump and Biden. That’s when the police presence increased dramatically.

Once they reached the statehouse, the main event for the next hour was shouting profanities and burning plastic American flags soaked in kerosene. One man tried to put the fires out but that earned him an attack by those attempting to set the fires.

Scene at the Capitol right now. Flags were burned by protesters and the fires were put out by police. pic.twitter.com/6UuxO63SfC

The lone Trump supporter who had been hanging out at the Capitol during the morning also was attacked, his Trump hat stolen and then set on fire. Police moved in at that point to separate the man from the crowd but took no further action.

The scheduled rally for the day, held by the Brown Berets, a Chicano group with a long history of activism, went off peacefully on the Capitol’s east side. “Biden/Harris, you’d better keep your promises,” they shouted. “We are powerful together!”