In southwest Colorado, high tech plays in the mud to produce ecologically sound architecture — and art 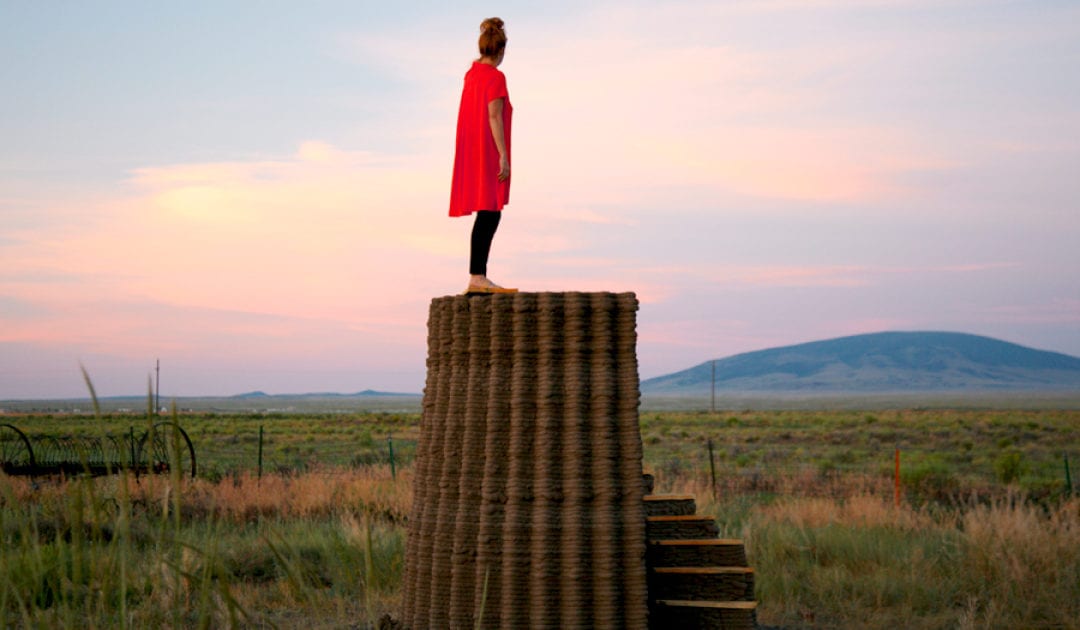 In the middle of Colorado’s San Luis Valley, a progressive architecture and design firm is proving that everything old is new again. Also, that the future is mud.

Combining indigenous mud-based building materials with 21st century robotics, California-based Rael San Fratello created the oddly beautiful structures of “Casa Covida,” their “proto-architectures” that connect high- and low-tech traditions. Its name is a nod to both the pandemic and the Spanish word for “cohabitation.”

The project recently took a virtual bow in an impressive hour-long event hosted by the Architectural League NY. (The video is online.) The partners, Ronald Rael and Virginia San Fratello, spoke from Antonito, in southern Colorado, and took questions about their work and about “the social agency of design.”

Seated by a fire inside one of Casa Covida’s adobe structures, Rael says in the video, “Buildings made of earth are usually seen as buildings for poor and rural environments. But all around the world on every continent are hundreds of thousands of cities made out of mud…we often overlook that they have existed for thousands of years.

“And so, really, I’m offering this counter position, to thinking about how we advance as a technological society by not employing materials that are damaging to the ecology and environment but in fact may be corrective to our ecology. The big question is, how do we position this material as a contemporary material, one that aligns with our contemporary sensibilities? That is a design challenge.”

The house is made of 3D-printed coils of adobe in three round areas comprising a sleeping chamber, a bathing room and a sitting area with a fireplace. The project has already won a 2020 Art + Technology Lab Grant from the Los Angeles County Museum of Art.

Everything in the borderlands is about fusion — language, food, music, belief systems — Rael notes in the video. “We’re thinking about how technology and tradition come together to make new forms of architecture,” he says. 3D printing adobe is just the latest hybrid.

The video is fascinating, complete with demonstrations of the software and portable printer that allow the company to make pottery, which San Fratello shows off in the nearby studio, and the larger, livable structures on Rael’s ancestral land near Antonito.

Rael, CEO and co-founder of Emerging Objects, is professor of architecture at the University of California Berkeley. San Fratello is chief creative officer and co-founder of the company, and associate professor of design at San Jose State University. Together in Emerging Objects they take 3D printing beyond plastic, experimenting with materials as diverse as sand, salt and bone. (The artistic duo is best known nationally for their neon pink teeter-totters slotted through the U.S.-Mexico border wall, subversively connecting the two sides in play.)

The creators’ overall goal is to prove that low-cost, low-labor construction is possible, efficient and safe. Think of it as the highest of low-tech. Or down-to-earth high tech.

Using clay, water and wheat straw found onsite, the project aims to “push the boundaries of sustainable and ecological construction.”

Talk about site specific: The project began in the contemporary borderlands along the Rio Grande watershed, beginning in El Paso and Juarez and ended near the headwaters in Colorado’s San Luis Valley. The Mud Frontiers website explains the valley was “the edge of the historic border between the U.S. and Mexico prior to 1848. The entire region has employed traditional pottery and earthen construction traditions for centuries.”

This isn’t quite as utilitarian a project as the 3D homes constructed in Mexico to provide shelter in disaster zones, part of an initiative to combat global homelessness. It’s more an artistic and political exploration.

Nor is it a tourist destination for travelers en route to Santa Fe. The site is off-limits to visitors — it’s on private property; specifically, the family ranch where Rael grew up.

“I’ve seen it from the road,” said Aaron Abeyta, director of the poetry program at Western Colorado University in Gunnison and mayor of Antonito, his hometown. “We’re his neighbor out there.”

Other than the roadside peek, the online presentation is the best available view for now. Rael declined an interview and wrote via email: “The project is on private property and not open to the public. At the moment, we prefer not to announce the project publicly for safety and security reasons.”