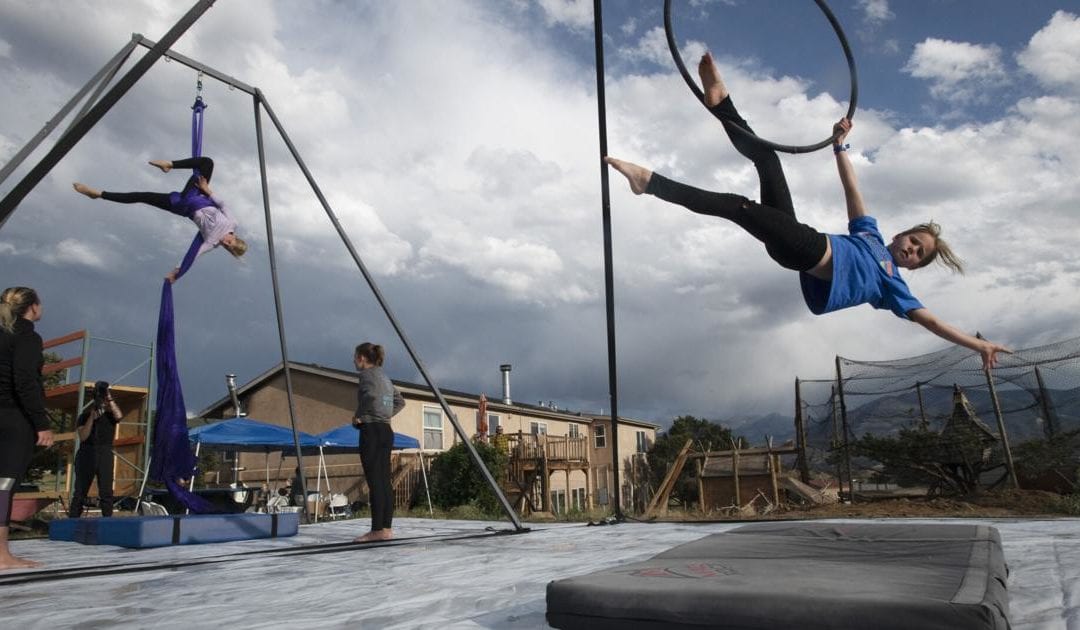 Welcome to the Salida Circus. Founder Jennifer Dempsey is giving kids in Colorado permission to succeed, fail, and try something new. (Video by Katie Klann)

SALIDA • Beside a chicken coop in the backyard of a home on the countryside, a dozen kids are flipping, twirling, cartwheeling, juggling, walking on balls and contorting their bodies on silks and rings suspended in the air.

Their ages range between 9 and 13. Their tutor is Joe Lobeck, a muscled 30-year-old fit for “American Ninja Warrior.” Maybe you saw him on season four of the show. That was 2012. A few years later, he found himself in this little mountain town.

“I had no idea,” Lobeck recalls of what he found here. “Like most people who come to Salida, I was like, What? There’s a circus?”

The nonprofit showcases a troupe of acrobats, aerialists, stilt walkers, clowns, magicians and other childlike grown-ups who perform around town and around the world spreading their love of circus. Their main mission is to spread it here. To inspire local kids. In recent years, the team has reported reaching more than 300 youths weekly through outreach programs across the Arkansas River Valley.

“It’s just part of their reality here,” says Steve Kucera, aka Magic Steve, a father and official ringmaster of the circus. “It’s like soccer this year, circus next year.”

“We find it’s the kids who don’t quite fit in other places,” she says. “Sometimes it’s that type of kid that sits on the outside. They think they’re the outsiders, and then they find themselves by coming together in the circus.”

So it’s been since 2007, when Jennifer Dempsey moved to Salida to be with her mom.

She had spent her career in the circus. She watched it fade from the mainstream, watched the likes of Ringling Brothers and Barnum and Bailey crumble in this enlightened era. There was no chance against animal rights groups. There was no place for “freak shows” and sexism.

But there has been a place for groups like Salida Circus. Dempsey founded the organization to be part of a global network within Cirque du Soleil — a “social circus” geared toward the underserved. American Circus Educators Association defines social circus as “a medium for social justice and individual wellness and uplifts the role of art and culture as powerful agents for change.”

These kind of youth clubs are common in big cities, including Colorado Springs and Denver. In rural Salida, Dempsey saw a need.

“People looked at me like I was nuts,” she says.

“I didn’t have a job, didn’t have anything but a bag of kids costumes and clown noses and a pair of stilts, and I had a backyard. So I thought, cool, I can do this.”

Dempsey did it previously in northern Ireland. She was there in 1989, a college student studying literature. She discovered a group teaching the circus to youngsters, converting hardened toughs into frolicking tricksters.

“So imagine that phone call,” Dempsey says. “’Hey, Mom and Dad, I’m in the middle of Belfast, and I’m thinking about quitting school and joining the circus.”

In that group, Dempsey saw a higher purpose combined with her childhood passion of acrobatics, juggling and unicycling. This was a return to that joy. This was introducing that joy to kids who found joy hard to find.

They weren’t happy with themselves. But they could be happy acting as someone else, and they could find their true selves along the way. That’s what the circus has been for Dempsey.

“When I become these characters, I have permission to be as big as I am and bigger,” she says. “The circus life is about living a larger-than-life life. And for me, it’s been a relief.”

From Belfast, she went on to perform for a couple of years in London. She built international relationships that would serve her well after starting Salida Circus.

Joe Lobeck’s first trip was to the Middle East — a region he figured he’d have visited in a prior military life.

Teaching circus to those poor kids, it was “bizarre,” Lobeck recalls. “How did we go from an M4 to a rubber chicken?”

It started with him aimlessly wandering in 2015. He was out of the Army, without a job and without any motivation to get one. A darkness grew in him, grew with his hair down to his shoulders.

He took multi-day walks. From Colorado Springs, he walked to Salida.

“That walk, it was prayerful in a way,” Lobeck says. “It was like asking the world for some direction, please.”

The Ninja Warrior always had an affinity for odd, physical acts. So there he was one day in a Salida park twirling a stick. There was a festival going on. Dempsey was there with the circus.

She recalls approaching the young, fit stranger with the stick: “You’re in act five.”

That was it for Lobeck. “I was swept away,” he says.

This has been Dempsey’s strategy with people. Magic Steve is another example.

Kucera loved magic since a fourth-grade talent show. He tried it for a living in his adulthood, until he could only take so many more birthdays with so little money adding up.

The magic had a way of fading further away later. His wife died of cancer.

Salida was a new beginning. Like everyone else new to town, the circus intrigued him.

He recalls Dempsey’s directive: “Get your act back together. You’re gonna be on stage in 30 days.”

“Oddly enough,” Kucera says, “I have done more performing arts here in Salida than I did in Las Vegas or in the Bay Area. It’s kinda like, by giving up everything and walking away, it all came back to me.”

It all came back in this unlikely place. When Joan Lobeck moved to Salida to be with her circus-minted son, she too got looped in, of course. If she could do origami, she could twist balloons, Dempsey told her.

Seeing the kids transform has been the biggest reward, Joan says. “It just boosts their self-confidence so much.”

The same circus magic worked on her son. Now Joe is the one instilling that confidence.

Out in the practice yard, here he is with a pair of kids who at one point were heatedly trying to one-up each other with athletic moves. The circus is no place for competition, Joe knows. So he proposed the two consider turning this competition into a performance. Now they are collaborators.

And here’s the boy who at one point Joe knew as “not the happiest of children.” Then the kid mastered the art of walking on a ball. “And he would smile, and the audience would just go crazy,” Joe says.

And now at practice there’s a girl who seems hesitant. She’s watching her peers accomplish things that apparently make her nervous. She quietly approaches Joe about it.