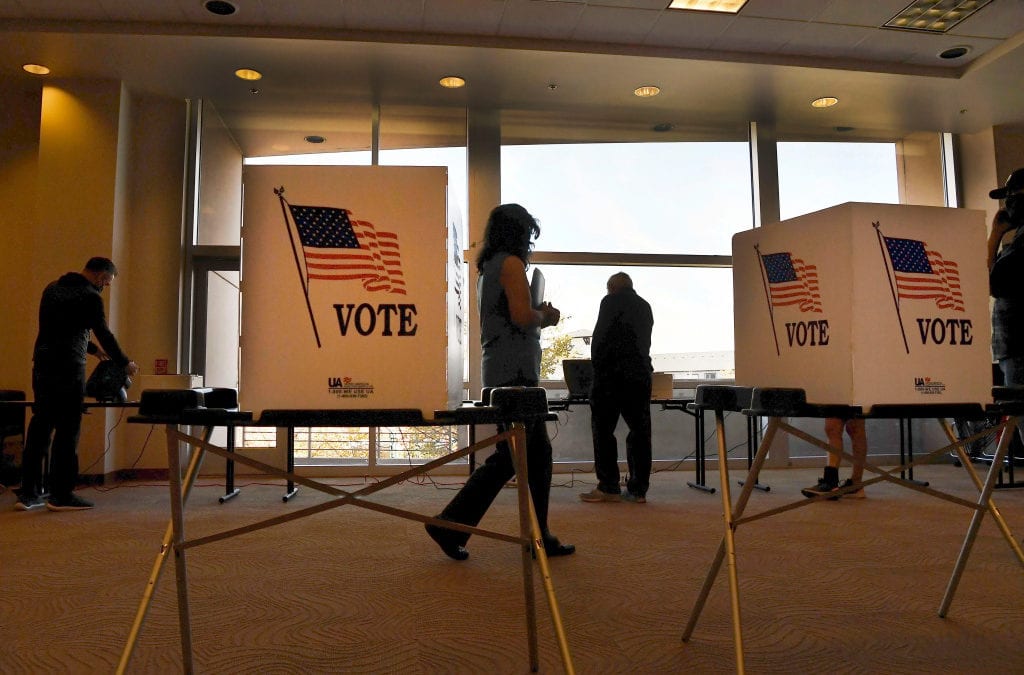 It’s a tradition fast fading in Colorado elections, but the act of venturing out to the polls and squeezing into a booth to cast a vote is still a cherished — and for some voters — critical option in their exercise of democracy.

For Savannah Timme, who just moved to Denver from California, it was the easiest way to register to vote in Colorado and fill out this fall’s lengthy ballot filled out at one place and at one time. She cast her ballot last week at the McNichols Civic Center Building downtown, which opened a week early to accommodate super-eager voters.

Starting Monday, polling places (or Voter Service and Polling Centers, in the vernacular of elections officials) will open across the state to give voters the chance to record in person their preferences on national, state and local races and issues.

“I enjoy doing it in person,” Timme said. “I’ve always voted in person and you can see the ballot going right into the box. You know 1,000% it’s counted.”

“Our goal has been to maintain all voting options, even in this unprecedented time,” said Pam Anderson, executive director of the Colorado County Clerks Association.

That means keeping all avenues to voting operational during a global pandemic — an obvious challenge in an environment where social distancing is the order of the day.

Several larger counties will be standing up voting centers in phases, adding more as Nov. 3 approaches, but state election officials say by Election Day 342 Voter Service and Polling Centers will be open across Colorado.

According to the Secretary of State’s Office, that’s 42 more locations than in 2018.

That may seem a quizzical strategy when in-person voting has been declining in Colorado as a result of the state’s decision to adopt a mail ballot system six years ago.

In 2016, 93% of voters voted by mail statewide, leaving just 7% who marked their ballot in person. The in-person share dropped to 4.7% of the electorate in 2018’s midterm election — with just 120,960 of more than 2.5 million voters casting their ballots at polling places.

Fast-forward to the June primary and with the coronavirus pandemic in full bloom, in-person voting dropped to less than 1% of ballots cast in Colorado, with 10,637 people voting the old-fashioned way.

Anderson said the June 30 primary was a “good example and model” for how to run the in-person portion of this November’s election as coronavirus numbers begin to burgeon once again.

Maintaining polling places — even as they get used less and less in Colorado — is still important, said Peg Perl, Arapahoe County’s deputy director of elections. In-person voting, she said, is instrumental for voters who need interpretive services, have last-minute address changes or need replacement ballots for those lost or misplaced.

“There are people who say, ‘I like to vote in-person,’” Perl said.

Arapahoe County will feature 29 polling places by Election Day, though it will have 11 up and running Monday. One of its vote centers will be a pop-up location in a vacant space at Arapahoe Crossing shopping center in Aurora. Perl compared it to the fleeting costume stores that pepper shopping plazas around this time of year.

“You can come in costume on Halloween,” Perl said, noting that voting centers in Arapahoe County will be open on the Saturday the spooky holiday falls on.

Masks, Halloween-themed or not, will be required in most polling places — to be worn by voters and election judges alike. In Denver, which will have 36 Voter Service and Polling Centers in operation by Nov. 3, social distancing will be enforced and everything will be repetitively cleaned.

“Election judges will disinfect everything — all the way down to the pens,” said Denver Clerk Paul López. “(The June primary) was a smooth election with no lines and no wait times — and nobody got sick.”

For the November election, the Secretary of State’s Office partnered with the state’s Office of Emergency Management to distribute personal protective equipment to county clerks throughout the state to be used at polling places. The inventory includes masks, face shields, hand sanitizers, sanitizing wipes and thermometers.

Colorado Secretary of State Jena Griswold is encouraging voters to return their ballots by drop box or mail to reduce the chances of COVID-19 infection, but Perl said voting in person is a tradition that’s not ready to die.

“I think there is a real inherent value in having in-person voting for many community members, and I don’t think that is something we would get rid of,” Perl said.