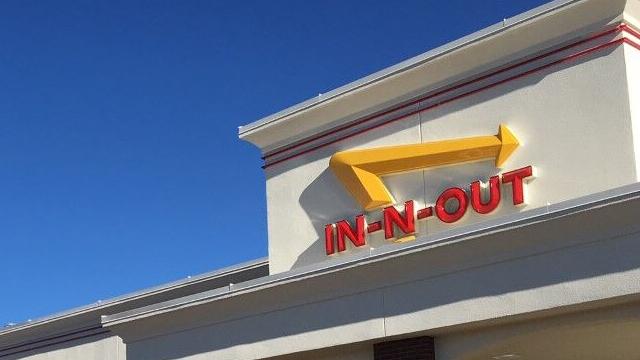 The signature crossed palm trees have been planted — a sure sign that In-N-Out Burger’s second Colorado Springs restaurant is close to serving Double-Doubles, shakes and animal-style fries.

In-N-Out envisions an opening next month for its new Springs restaurant, where construction is nearing completion near Powers Boulevard and Constitution Avenue, in the First & Main Town Center retail complex on the city’s east side.

“The final details are still coming together for our second Colorado Springs restaurant, but we’re aiming for a November opening,” Denny Warnick, In-N-Out executive vice president and chief operating officer, said via email.

A November opening would come one year after In-N-Out debuted its first restaurant in Colorado Springs and in the state Nov. 20, 2020. That location opened southeast of InterQuest and Voyager parkways, in the north-side Victory Ridge development.

An In-N-Out Burger banner advertises starting wages of $17 an hour, going up to $20.50 an hour, at the chain’s second Colorado Springs restaurant that’s targeted to open in November near Powers Boulevard and Constitution Avenue.

On Wednesday, crews landscaped portions of the restaurant site near Powers and Constitution, while other employees worked on light fixtures that hang from a patio covering, among other activity on the property.

The restaurant’s exterior, parking lot and drive-thru lane appear to be largely completed, and In-N-Out’s familiar logo has been affixed to the building’s façade.

And yes, two crossed palm trees are now visible along Constitution. Their significance?

“It’s a Mad, Mad, Mad, Mad World,” the 1963 screwball comedy, was a favorite of In-N-Out founder Harry Snyder, according to the chain’s website. In the movie, characters race to find treasure that’s been buried under four crossed palm trees planted to resemble the letter “W.”

Crossed palm trees have been planted in preparation for the expected November opening of In-N-Out Burger’s second Colorado Springs restaurant, east of Powers Boulevard and Constitution Avenue on the city’s east side. The crossed palm trees are a signature image outside many restaurant locations for the California-based In-N-Out.

“Because each In-N-Out store is Harry’s treasure, a tradition of planting crossed palm trees in front of most In-N-Out locations begins,” a 1972 history page entry said on the website.

Palm trees — crossed or not — also appear on In-N-Out restaurant walls, paper cups and merchandise, among other places.

Whether the actual trees survive a Colorado winter remains to be seen.

“We have planted palm trees at our new Colorado Springs location, and of course we’re hoping we can keep them healthy through the winter,” Warnick said.

At the new Colorado Springs location, an In-N-Out Burger banner says the restaurant is accepting applications for jobs that start at $17 an hour and with the opportunity to earn up to $20.50 an hour.

A landscaping crew works Wednesday at the site of In-N-Out Burger’s second Colorado Springs restaurant, east of Powers Boulevard and Constitution Avenue on the city’s east side. California-based In-N-Out says it’s aiming for a November opening for the location.

That’s a boost from last year, when In-N-Out advertised starting wages of $14.50 an hour, going up to $17 an hour, for its first Springs location.

Because of a severe labor shortage, many traditional, quick-serve and fast-food restaurants nationwide have boosted pay to attract workers.

In an email, Warnick said employees at all In-N-Out restaurants received raises in August.

“We are committed to maintaining a higher-than-average pay structure as one way to take great care of our associates,” he said. “Other important ways include treating our associates like family and doing everything we can to create and support a positive and enthusiastic work environment.”

In-N-Out hopes to employ 60 or more people at its new Colorado Springs location, Warnick said. Most are hired as part-timers, and some go on to become full time after they gain experience, he said.

When In-N-Out opens its second Springs location, it will join a burger hub of sorts near Powers and Constitution. The busy intersection is part of the Powers corridor, which is one of the city’s most popular retail areas.

Culver’s, A & W, McDonald’s, Burger King, Sonic, Bubba’s 33, Chili’s, Old Chicago Pizza & Taproom and Rock Bottom Restaurant & Brewery are among the nearby eateries that specialize in burgers or have them as a prominent menu item.

Red Robin Gourmet Burgers and Wendy’s also are a short drive to the north and south, respectively. A franchisee for Whataburger, the Texas-based chain that’s expanding to Colorado Springs, potentially might have a restaurant across Constitution from In-N-Out.

Founded in Southern California in 1948, In-N-Out Burger has a cult-like following among its fans, who devour its never-frozen burgers that are made to order, hand-diced fries and shakes made with real ice cream.

The privately owned chain has limited its growth over the years, a strategy that has helped maintain its popularity; it now has more than 360 locations in seven states, which includes Colorado.

In-N-Out announced in November 2017 that it would expand to Colorado. In addition to opening its first restaurant at Victory Ridge a year ago, it built a distribution and production facility at the development that will serve its restaurants throughout the state.

In addition to its locations in Colorado Springs, In-N-Out has opened restaurants in Aurora, Lakewood and Lone Tree. It also plans locations in Castle Rock, Denver, Loveland and Thornton.