In Defense of 405 Colorado – TOWERS 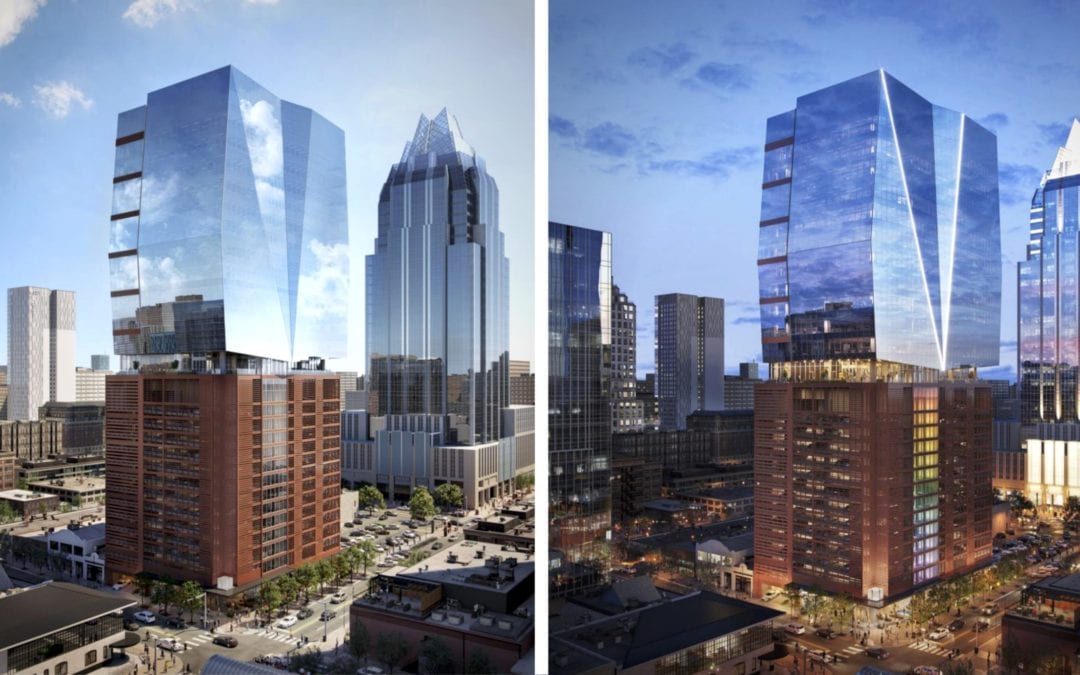 405 Colorado, an office tower by Brandywine Realty Trust now noticeably on the rise at the northeast corner of West Fourth and Colorado Streets, has managed to snatch the title of “most divisive downtown architecture” away from the Independent — and that makes sense, because it’s a pretty unusual building in its own right. Expected by 2022, the project’s already starting to show some bits of its exterior:

At 25 floors, it’s not very tall, with a parking podium spanning roughly the same height as its actual 210,000 square feet of office space. The Austin Business Journal names unspecified “site limitations” for this lack of height, but since the property isn’t inside a Capitol View Corridor we’re not really sure what those limitations might be — anyway, the proportion of podium to tower gives the glass-clad part of the structure a sort of stubby appearance, and we’ve taken to calling it the Molar because, all aesthetic value judgements aside, the thing looks like a damn tooth.

You mean the 405 Colorado Parking Tower with rooftop offices?

Its size compared with other nearby towers plus the overwhelming percentage of parking garage means almost every self-identified urbanist is primed to dislike what the building stands for — the prioritization of cars over people — and that’s happening long before they even bother to formulate an opinion on its looks.

Now would probably be a great time to mention that we like the building. I’ll admit that it took a while for me to come around, whereas my publisher was always on board from the beginning, a good example of how the opinions we express on this site are the product of open debate (just ask our Facebook commenters).

405 Colorado is an attractive design. I will die on this hill. pic.twitter.com/97u1Sir5z7

From our perspective, the parking criticism — though quite a valid holistic critique of the ideologies driving the design of the greater urban environment and often contributing to issues like traffic, sprawl, and pollution — shouldn’t determine our entire opinion of the tower’s appearance, not only since we cut other buildings with absurd amounts of parking a break when evaluating their design but also because it’s possible to think about its form separate from criticism of its function.

This may seem weird to you, since you’re a very sharp and plugged-in Towers reader, but I can assure you from personal experience that a large percentage of Austinites walking past this building without ever going inside will have no idea where its parking ends and its offices begin. I know this sounds ridiculous — the garage is right there! — but I constantly encounter people who just don’t think about buildings this way, and despite the lack of understanding on a technical level, if you ask you’ll find almost everyone still has an opinion on how it looks. An even tougher pill to swallow is the fact that a ton of people love the idea of more parking garage space downtown, because it means they have more places to park their car downtown. Yes, I know.

And on a purely aesthetic level, there genuinely is quite a lot to like about 405 Colorado. Its design by prominent national architects Duda Paine, the same folks that brought us the much-loved Frost Bank Tower, is inspired according to founding principal Turan Duda by the notion of a sculpture sitting on a pedestal:

As a part of that, Duda didn’t attempt to hide 405 Colorado’s parking garage like most other downtown Austin towers. Instead, the parking pedestal will be clad in a “warm terracotta-like material,” he said. It will have an earthy tone that will fit in with other traditional brick buildings still standing in Austin’s warehouse district, which is now a hodgepodge of stores, restaurants, night clubs and offices.

On top of the pedestal will be the crystalline, glass sculpture that serves as the office space in the tower, Duda said. The faceted glass reflects “all of the different facets of the sky.”

This is a great example of an architect working within design limitations imposed by the person that hired them — in this case, a huge parking garage, almost always the ugliest component of any building — and devising the most elegant solution possible within those constraints. The color of the podium’s so-called “terracotta-like” cladding is one of the most interesting materials we’ve seen on the side of a downtown building in recent memory, and as constant advocates of oddball skyscraper colors we like the decision to push the brownish earth tones almost all the way to orange.

It provides a wonderful contrast with the office half of the tower, making its choice of blue-tinted glass seem deliberate rather than generic, and we love how the faceted appearance of its facade harmonizes with Duda’s work on the Frost Tower’s crown.

Another lovable detail we only recently appreciated is the V-shaped lighting design on the upper half of the building’s southern face, with what must be LED tube lights running along each crease in the facade to emphasize its origami-like folds. You can see how striking this will look on the completed building now that the developers have started testing out the lights on a small finished portion of the curtain wall:

We’re certainly guilty of loving an underdog — why do you think we keep insisting the Hobby Building is a valuable work of postmodern architecture worthy of preservation — but we figured after making our own case for 405 Colorado’s appearance we’d pitch the same question to our readers. To that end, please take our quick, anonymous survey regarding your feelings on the building, and we’ll figure this out together.