In Colorado’s hard-to-count communities, census outreach and coronavirus support are one and the same 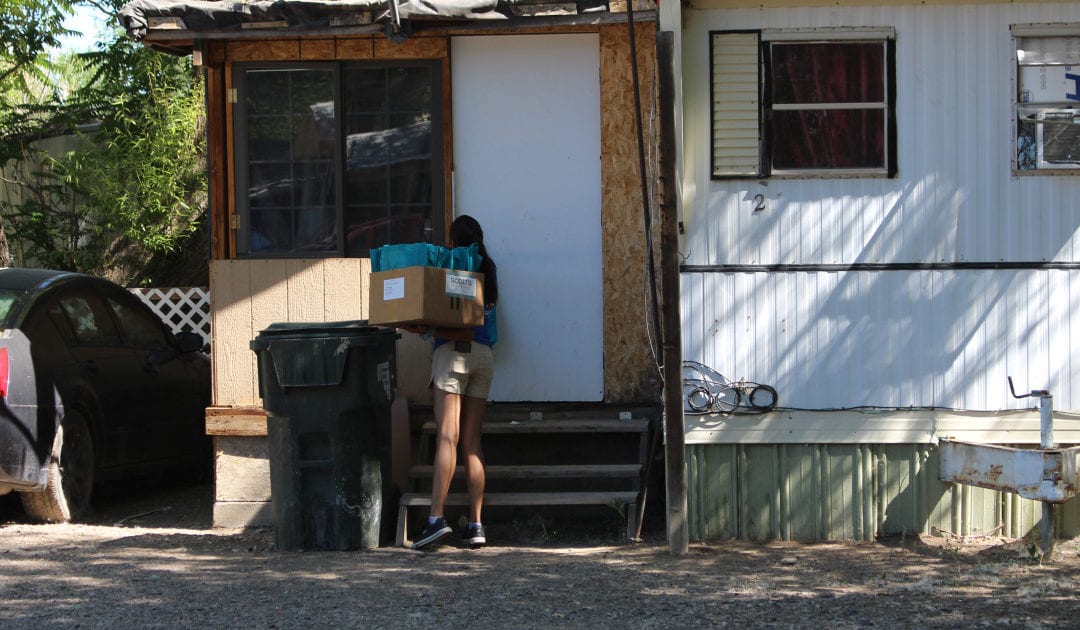 To say that 2020 has not been a normal year to take a national census — well, it doesn’t quite capture the full extent of the situation.

The Census Bureau’s normally nonpartisan operations have been repeatedly undercut, whether it’s in the form of chronic underfunding, the federal administration’s fear-stoking attempt in 2019 to add a question asking about citizenship, or the oft-shifting goal post of a deadline.

A federal judge ruled on Friday — again — that the Census Bureau must continue 2020 census collection efforts until Oct. 31. It’s the latest development in a string of back-and-forth battles between the Trump administration and the legal system on when the survey can legally end.

Oh yeah, and there’s the whole coronavirus pandemic. The 2020 census has overlapped almost exactly with the pandemic’s impacts on Colorado. Census Day, April 1, came just over two weeks after most of the state adopted Stay At Home orders.

As a result, this year’s census outreach has often been braided into pandemic-related support efforts. As of Oct. 1, the state has been 98.6% counted, including self-responses and non-response follow-up (NRFU) by census-takers. Not bad, all things considered, but that remaining 1.4% includes folks in some of the most difficult to count populations.

Remember, census results determine how billions of federal dollars are spent every year. Every person not counted equals roughly $23,000 less for their state, county and city during the decade between censuses.

The Colorado Sun checked in with five different groups across the state to see how they’ve been navigating the unprecedented collision of circumstances.

A stone’s throw from Mesa Verde

But it certainly wasn’t easy. Annabelle Talk, one of the main liaisons between the tribe and the Census Bureau, noted multiple barriers to counting the reservation’s residents. For one, everyone gets their mail through a post office box, but census documents have to go to a residential address.

Another issue: the Census Bureau often had the wrong address for in-person follow-up. Other times, errors in the system meant that the same resident got multiple follow-up visits, even after they had completed the survey. Not to mention the shifting deadline and lack of consistent communication around its changes.

“It was a challenge,” Talk said. “We really hustled and worked hard.”

Most of the tribe’s reservation overlaps southwest Colorado’s Montezuma and La Plata counties. Patrick Littlebear, interim grants and contracts administrator for the tribe, noted that because the reservation is also partly in New Mexico and Utah, the tribe got different state and federal funds with differing timelines and terms.

What helped close the count gap? Talk said leaders reminded people often about the impact that an accurate count can make for the tribe. Additionally, all of the census-takers for the reservation — also called enumerators — also live there, offering a much-needed layer of community trust.

And census outreach was integrated into pandemic response efforts, including at drive-up COVID-19 testing, to keep the census on everyone’s radar. The tribe got grant money to purchase mobile tablets and stationed staff with them around town, so those without internet access at home could easily fill out the form online.

“It helped a lot, just sitting there all the time,” Talk said.

Way out on the Western Slope

When the pandemic hit Colorado in March, the Western Slope-focused Hispanic Affairs Project had to relocate its census-oriented in-person plans to the digital sphere. Karen Sherman Perez, the group’s civic engagement and development coordinator, said she was concerned, given the community’s preference for in-person interactions.

Perez estimates that about 2,500 people across six different counties — Delta, Montrose, Gunnison, Ouray, San Miguel and Mesa — use their services in a given year, but in 2020, that’s almost doubled, despite the shift to virtual communications. Once the organization’s semi-regular email bulletin switched to a weekly format at the start of the pandemic, it included messages about the census in every single email.

Thanks to multiple sources of grant money, the group also worked with the Spanish-language radio station in Grand Junction, 104.7 La Jefa, to promote the census during prime listening time. Even during phone calls to check in with community members, Perez and her colleagues would ask about the census.

“We were trying to share different facts about how this is important and their participation would impact their families directly, whether it was children in schools, services they received, redistricting, just a broad spectrum,” Perez said. “A lot of people, not just immigrants, don’t understand why the census is so important.”

Last year the Trump administration proposed adding a question to the 2020 census asking if respondents were U.S. citizens. Courts ultimately ruled the question unconstitutional, and it was not included. (Title 13 of the U.S. Code, which mandates the census, requires that the personal information of survey respondents can’t be used against them by the government or in court.)

Still, Perez said that even just talking about such a move left “a bad mark” for many in the local immigrant community, especially those who are living in the U.S. illegally.

“There’s just a constant level of fear and anxiety for those families on a daily basis for so many different reasons,” Perez said. “So this whole concept of sharing personal information about your household, even though it’s fairly impersonal, there was a fear factor there.”

Even some folks who accepted pandemic-induced financial aid were skeptical, according to Perez; they didn’t want it to come back and bite them later.

Between the Sangre de Cristos and La Garitas

Pre-pandemic, the Boys and Girls Club of San Luis Valley was prepared to host a variety of events working toward increasing census turnout. Family nights at the club’s local facility for census-themed activities would offer something for all age groups, along with a shared meal. A partnership with Adams State University would help get the word out around campus and its community.

Of course, none of this happened. Once the coronavirus hit, the nonprofit pivoted to a more COVID-safe approach. It set up stations in the region’s counties to offer census-themed DIY activities; one was labeled “Having A Blast With The Census” and featured a kit to make a toy rocket. Some of the stations also offered meal kits, to make up for the food that families would have gotten had there been activity nights. Many families didn’t have internet access at home or hadn’t received the mail-in form, so they completed the census right there at the tables.

So far, the Boys and Girls Club has connected with about 1,200 families in the valley, according to Olga Montano, extended learning program coordinator. Like other immigrant-heavy communities around the state and country, Montano said some residents expressed concerns about the security of the census as well as the potential of a citizenship question. But once the group’s staff vouched for its credibility to someone, that person would often go tell other members of the community.

“Going and having those people that are well known, and going and doing the census through these stations, it really encourages people to go and do it,” Montano said.

In addition to determining how much federal funding the Valley receives for a variety of welfare programs, the census also helps fund the Boys and Girls Club, among other after-school programs. Montano said that messaging really drove home the impact that a thorough census count could have for the tightly knit Valley community.

“We have to do our part and show the community that by going and doing the census, it also helps us to go and get some of this funding that is so important,” Montano said.

In the heart of the High Country

Staff and volunteers at Neighborhood Navigators of Eagle County wear many hats: community liaisons, translators, playground builders. This year, they added another one: census advocates.

The group canvassed neighborhoods, delivering flyers with information in English and Spanish, as well as leaving goody bags on people’s door handles, without in-person contact. It helped coordinate segments on the local radio, including one with a lawyer who talked about the legal logistics of the census and the illegality of a citizenship question.

The nonprofit also got grant money to stand at tables with registered census-takers outside of community businesses, laptops in hand, for residents — especially those living in Dotsero — who don’t have regular internet access. Norma Gurrola, main coordinator and Dotsero navigator, said that it often helped to tell folks that she had already done her census for her own family.

“When you talk one on one and they see you, they feel that trust and they just go for it, and they do it,” Gurrola said.

Gurrola noted that some people are quick to misunderstand why communities get undercounted.

“How can you do something that you don’t even have the resources to be able to do?” Gurrola said. “We are really good at judging, but you never know how busy families are, because they have their own things to do.”

During the pandemic, much of the team has still been doing in-person work, including to help hand-out lunches at the local schools, with census information attached. Gurrola said it was scary to go out and about at first, but the community needs their help more than ever right now.

“Our passion to support the community and give them the right resources is more important for us,” Gurrola said, “and they trust in the work that we do.”

Counting where the cantaloupes grow

When Duane and Elaine Gurule formed the Small Town Project in 2019, they knew the census would be a big part of their work. The nonprofit joined SECO Counts, a collaborative of local groups, to do outreach to the local Hispanic community, and Duane was on Otero County’s Complete Count Committee.

So when the organization hosted their inaugural public event on May 1 this year — the first of a weekly walk-up food pantry without an ID requirement or proof of need — they included flyers with census information in English and Spanish, as well as pandemic-friendly activities like census-themed coloring books. All of the food is sourced from natural foods distributors, as well as local companies, an intentional choice to support the local economy.

Since May, about 1,600 families have come to the Friday pop-up pantry. Recently, Small Town Project used a grant from the LOR Foundation to purchase two laptops, setting them up at a station outside the food pantry. In the first two weeks, 26 families filled out the form. The local immigrant community has been wary of the census, as a result of the citizenship question debacle. But, Duane said, the weekly event offers them a place to ask questions to a well-known community member, particularly about the safety of the survey.

“Hopefully because of the relationships we’ve built with the community, that’s what helps us encourage a complete count,” Duane said.

U.S. citizen residents, meanwhile, questioned whether responding to the survey is worth it, Gurule said. The state and feds already have their information in multiple other ways, they feel, so why give it to them once again? According to 2010 returns in Otero County compared to 2000, the population decreased to 18,831 from 20,311. But for school districts and other local facilities, increased need indicated that the population may have actually increased. Duane noted that funds from the CARES Act, one of the pandemic-inspired relief packages, were divvied up based on 2010 census data.

“We’ve been able to use that as a direct example of how even a small percentage of noncompletion in 2010 could have cost us,” Duane said.

Also included in the project’s efforts: registering those who are eligible to vote.