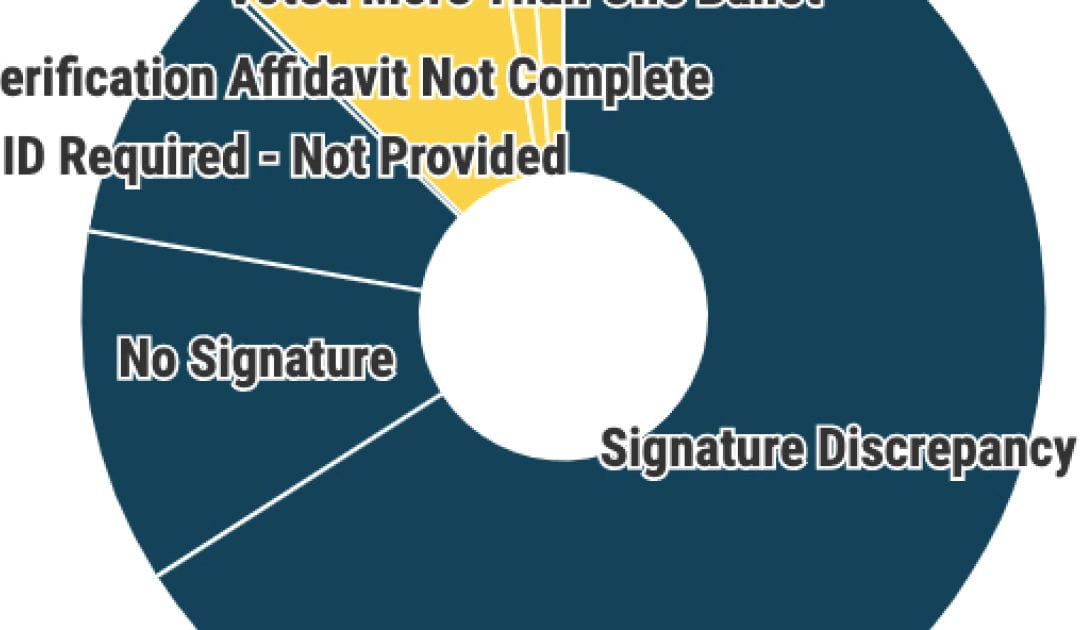 It’s a small fraction of the 2.7 million votes tallied — 0.9% — but still a notable sum in a state that bills itself as one of the easiest places to vote.

The most alarming number: nine out of every 10 ballots rejected could have counted if the voter fixed the mistake — what’s known as curing a ballot.

A Colorado Sun analysis of data on rejected ballots from the 2016 election — the first presidential election with a mail ballot system — found that 67% of those ballots didn’t count because of a signature discrepancy. Another 11% of ballots rejected lacked a signature. The 2018 election found similar rates.

The county clerks who run elections are required to notify voters about such mistakes and give them an opportunity to correct it, but many voters don’t take the extra step. This year, voters can fix ballot mistakes via text message under an existing program expanded statewide by the Secretary of State’s Office.

The remaining portion of rejected ballots cannot be corrected. In the vast majority of those cases — 77% — the ballot arrived after 7 p.m. on Election Day. More than 2,000 ballots in 2016 were rejected for this reason, the Sun analysis found.

Here are six graphics that help explain why ballots are rejected and which voters are most affected.

A breakdown of rejected mail ballots in Colorado

A look at the number of rejected ballots from 2016 and 2018 elections reveals a pattern about why the votes didn’t count. Most of the tossed ballots could have been cured, or fixed by the voters. A much smaller portion were rejected outright, mostly because they arrived too late.

The turnout for the two elections is different, and the reasons for the rejections vary slightly. For instance, the proportion of ballots dismissed for signature discrepancies and lack of a necessary identification fell slightly in 2018 compared to 2016.

One reason signature discrepancies may decrease: The more often voters return mail ballots the more signatures the state keeps on file, so there are better references for comparison.

The reasons ballots are rejected shift significantly depending on the age of the voter, the Sun analysis found.

Signature discrepancies and failure to provide a copy of identification with the ballot disproportionately affect younger voters — many of whom are new to the system. In Colorado, first-time mail voters must present a copy of their ID if not previously verified by the county clerk.

And voters under age 34 are more likely than their older peers to submit ballots after 7 p.m. on Election Day that don’t get counted.

A deeper dive on young voters shows how much more likely they are to have ballots rejected.

By comparison, only 0.2% of rejected ballots came from voters age 65 and older.

A partisan breakdown shows similar disparities. Unaffiliated voters — those not aligned with any political party — see ballots not count at a higher rate than those from the two major parties. Voters affiliated with other non-major parties also experience greater rates of rejections.

The reasons ballots are not counted also varies by party with unaffiliated at higher levels in all categories. The two major parties — Democrats and Republicans — do have a similar number of ballots arrive too late.

A map of rejected mail ballots in 2016

A county-by-county breakdown shows some counties experience a higher percentage of rejections than others. Small counties are at the top and bottom of the scale.

Of the 12 largest counties in Colorado, Adams County — a key swing district — had the highest rate of rejections at 1.5% in the 2016 election, followed closely by Republican-rich Mesa County at 1.3%.