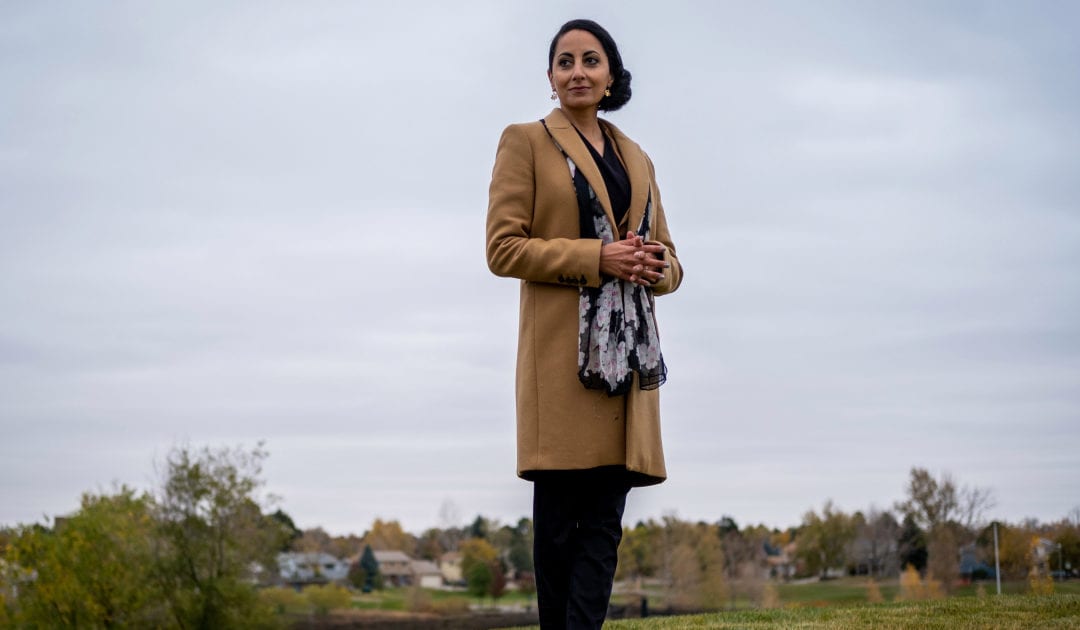 In all likelihood, Iman Jodeh will win her race and be elected to the Colorado House of Representatives in District 41. And if she does, she will become the first Muslim lawmaker in the state’s history.

Jodeh, a community activist and educator, is running to replace Democratic state Rep. Jovan Melton, who is term limited and last won reelection in 2018 with a nearly 30-point cushion. Democratic leaders expect Jodeh to cruise to victory in the Aurora-area district that sits just north of Cherry Creek Reservoir and southwest of Buckley Air Force Base.

Her election would be historic not just for Colorado. In 2015, the most recent year for which data is available, there were just three state legislators the nation who were known to identify as Muslim, according to the National Conference of State Legislatures. It’s unknown how many there are now.

The groundbreaking nature of the race isn’t lost on Jodeh, who wasn’t afraid in an interview to use the word “historic” to describe the prospect of her election. But, she said, she didn’t run just to be the first Muslim in the Colorado legislature.

“I’m not running to be the first, and that was never my intention,” she said. “I’m running because I feel like my lived experiences have the ability to influence progressive policy and move the needle in a positive and progressive way.”

Those lived experiences come from being the Denver-born daughter of two Palestinian immigrants. She grew up in Aurora and graduated from Overland High School.

Since graduating from the University of Colorado Denver with a bachelor’s and a master’s degree, she is now a community liaison for Interfaith Alliance of Colorado, and she is a frequent face at the Capitol, where she advocates on behalf of Muslims. In 2008, she founded Meet the Middle East, a nonprofit whose mission is to bridge understanding between Americans and what she says is the “most misunderstood region of the world.”

Even though the state hasn’t had adequate Muslim representation, she said she’s lucky to live as a Muslim in Colorado. “We have a very low rate of Islamophobia here,” she said. “That doesn’t mean it’s not present. I want to be clear about that — we still face that threat.”

Jodeh carries the endorsement of Vermont Sen. Bernie Sanders, a progressive heavyweight, and believes health care is a human right and climate change needs to be urgently addressed. But, she said, when it comes to making change, she’s not necessarily looking to pass groundbreaking liberal proposals. “Some of the most effective legislation happens incrementally,” she said.

On health care, she said, that could mean lowering the cost of prescription drugs and providing better access to emergency services. She also supports paid family leave, a question on the 2020 ballot.

Her Republican opponent, Bob Anderson, a former school teacher and corrections officer, said he knows he’s facing strong headwinds in District 41. He said he was pleased Jodeh started taking him more seriously in recent weeks by stepping up her campaign operations, but added that he worried she may govern with too much focus on her religion.

“She has a fair percentage of Muslim constituents,” Anderson said. “However, there’s quite a few more African Americans and Hispanics. So I would hope that they get represented. Everything I have seen from her website, her resume and Facebook is that she’s promoting her religion and Palestine. And I think there’s more to it than her agenda. I want everyone to be represented.”

But Jodeh, who lost a bid to fill a state Senate vacancy earlier this year, said her election wouldn’t just be about representing Muslims. Her experiences, she said, enable her to be an ally and a voice for a range of identities and races “across the board.”

“I think it’s important that we do honor our democracy and not squander the voice of the people,” she said. “Women fought for a very long time to have a voice and a vote. People of color fought for even longer.”

Chris Kennedy, a Lakewood Democrat and the assistant majority leader, said Jodeh would empower the legislature to better serve the state. The Democratic lawmakers in the House, he said, now consist of roughly 70% women and about a third of the 41-member majority are people of color.

“I really think that it just enriches our ability to make sure the policies we work on are helping lift up people all across Colorado regardless of their life experience,” he said.