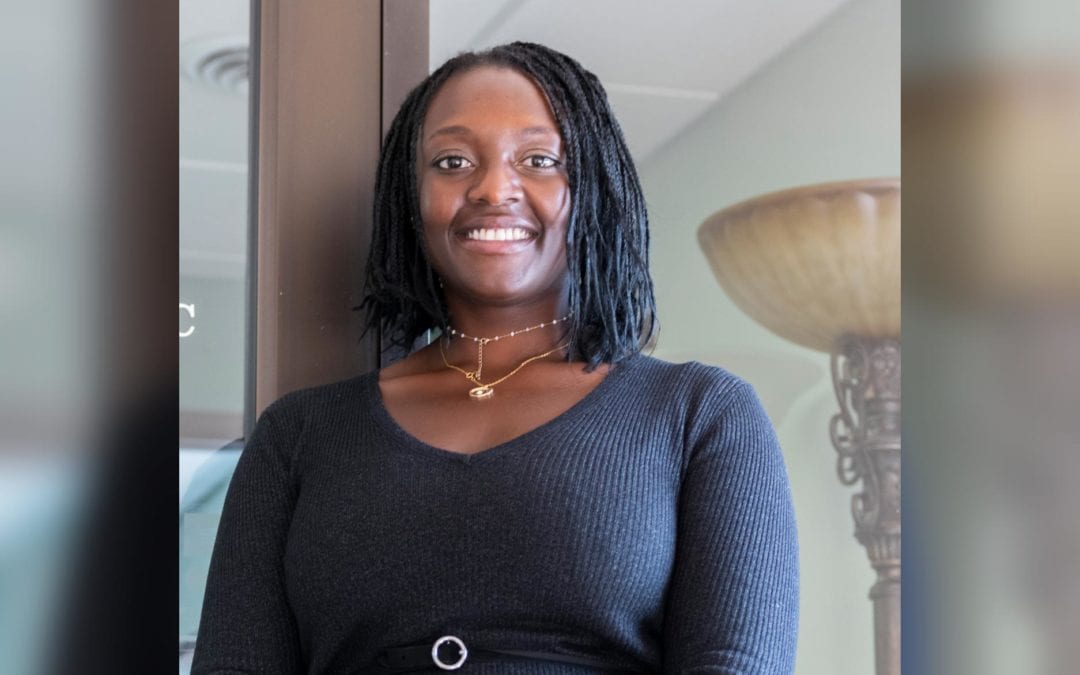 In her early 20s, Esohe Igbinedion got her first taste of the legal system while trying to fight a simple traffic ticket.

She remembers the experience was frustrating and nerve-racking and intimidating all at once.

“It was really an anxiety-filled situation until I got this attorney that made me feel safe, made me feel heard, and not judged,” Igbinedion said. “So that definitely stuck with me.”

The ordeal sparked in her a desire to provide that same resource for others navigating the court process.

Originally from California, Igbinedion graduated from Appalachian School of Law in 2016 and eventually came to Colorado Springs to study for the bar exam. But after passing the test, she decided to put down roots in Olympic City USA.

Igbinedion worked briefly at a local firm before co-founding a criminal defense firm, Springs Justice Center, with a colleague in November 2019. Her co-founder left the firm two months later and Igbinedion has been a one-woman operation ever since.

“It is called Springs Justice Center because I want to project to the community that this is a place for justice,” Igbinedion said.

“I try to be the voice for my clients. Because really, if you are not working in [the courthouse] you really don’t know … the correct ways to get what it is you need done. So I am not only a teammate with my clients, I’m their translator. I speak on their behalf.”

Igbinedion sat down with the Business Journal and discussed her work at Springs Justice Center, as well as her views on the Black Lives Matter movement and local protests stemming from the murder of George Floyd in Minneapolis.

Tell us about the Springs Justice Center. Who are your typical clients?

In a nutshell, Springs Justice Center is kind of the start to a ‘mid bono’ firm, as I like to call it. Right now, it’s not completely pro bono. I would love, at some point, to be able to live my life as well as help people around me. So what I currently offer is — sometimes people don’t qualify for the public defender’s office. They may not make enough money [to retain a private attorney] but they make too much money for those [public defender] applications. So I want to give an option for people where they can get really great defense work and really great representation at a lower cost or on a payment plan. I’m pretty flexible about it. That’s really what the center is all about — protecting people, helping people and really just being there without any judgment.

What do you enjoy about the work?

I truly like helping people. I truly enjoy helping them get through this process that is very confusing to an outside observer. A lot of my reviews that I get from people are that I was able to help them and that they felt they were part of a team. I didn’t tell them what they needed to do, which is what you kind of think of when you have an attorney. So I like being able to guide and help people through it so that they don’t feel judged and so they don’t feel as anxious.

What are your immediate goals for the firm?

Because of COVID-19 and how the courts have changed by shifting to a lot of video appearances or phone appearances … being around during this time has shown me that we can create a different type of firm from the corporate firm that we all know, or even the smaller mom-and-pop shops. I want to meld the two, so that you do get that personal touch, but it’s also very efficient and streamlined. So what I am planning on is essentially becoming virtual. My website right now and my phone calls can go directly to my phone. If I can’t get to you, you can text me and let me know who you are. We can set up meetings that way. And I also have ways that I’m able to do video conferences. Clients need to see who’s going to represent them, so that they can really trust you. And the business is definitely growing. I’m actually in the process of moving offices. I want to get a receptionist and all of those things. So I’m growing as much as I possibly can but I’m not really set on what it is that I want, specifically, because I want to be flexible. Because life changes.

What is the landscape of black-owned law firms like here in Colorado Springs?

It’s relatively small. I know of two other black attorneys here in Colorado Springs that I’ve actually spoken with and converse with. I’m hoping there’s definitely more out there … but it is pretty small.

Why is it important that there are black-owned firms in this community?

It’s important to see people of color owning businesses and thriving in a community where usually that’s not going to be the norm. I am very proud to be a black female entrepreneur here in Colorado Springs and to be that kind of example. And it started as an example to my siblings — I’m number two of nine kids —  so really, my work ethic was just about showing them that they can do anything. And then growing up and realizing the world is a lot bigger than just my family, I started realizing I didn’t have anyone really to look up to. And so being in the position that I am in, I’m really glad that I’m kind of an example for people … that they can do this. The struggle is there in the world that we live in. But if you work hard, and if you really, truly believe in what it is that you want to bring forth to the world, you can do that.

Are you involved in the local Black Lives Matter movement?

I have not been very involved other than making sure that I’m reading as many articles as I possibly can and just touching base with my family and checking in on how they’re dealing with everything. Because even though the riots and the anger and frustration that we’re seeing right now is very recent, I’ve dealt with it my entire life.

Just knowing what is going on right now is the best thing that I can do, because it goes back to being an example for women like me or women who want to be entrepreneurs, specifically. With everything going on, you can still rise above all of that, focus on what it is that you are doing and still be that example for your community. Because honestly, the best thing that we can do in this situation is change people’s minds.

So with the destruction of property and all of the differing opinions about what is going on, I stick with the fact that you really can trust actions, not words. And I just strive to live the way that I say I want to live, and work as hard as I possibly can so that there is an example out there of what can happen if you do. And then slowly that changes people’s minds.

What are your thoughts on police brutality against black Americans?

This unrest — black people in America are always remembering it and always feeling it. Why right now is so different is I think the level of unrest, the level of fear and the level of terror is at an all-time high. And I say that because … I’ve traveled all over the place and I’ve always had that thought in my periphery. But I’ve never really felt the fear that I think is just permeating our society right now. The fear of just walking down the street. Your life can be ended in an instant just because you’re outside. It’s absolutely terrifying. And I would say we’re at a precipice. We’re at the cusp of something and because of the fear and the terror that’s going on, if something doesn’t change, what’s going to happen next? So because of that, people’s reactions make sense to me. I do not condone the destruction of property, but I can understand it. I can understand what people are doing because their frustration is not just recent. It is decades of frustration that is coming to a head. And I guess 2020 is the year.

What needs to change for black Americans to feel safe here?

I honestly can’t answer that question, because I think to be able to feel safe — at least for me, because I don’t want to speak for anyone else — it’s really going to take a whole societal overhaul and a complete shifting of views. Only when we get to a point where people are not just judged by the color of their skin, can I see a safer or a less fearful black nation.