Idaho man charged with killing Colorado girl, 12, who vanished in 1984 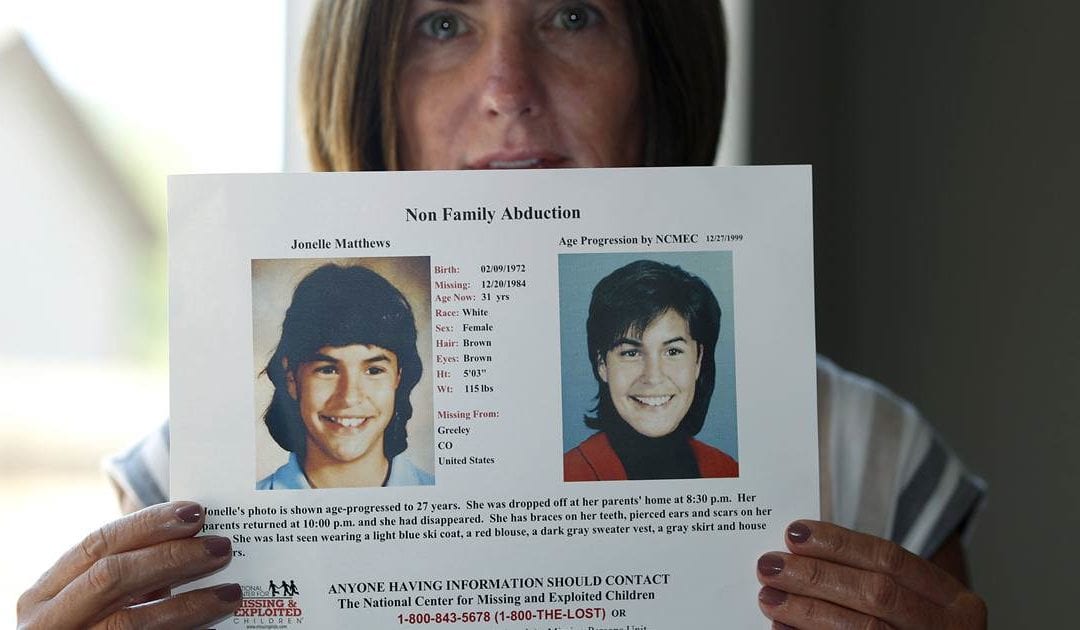 An Idaho man who twice launched long-shot bids for governor has been arrested and charged with kidnapping and killing 12-year-old Jonelle Matthews, who disappeared in 1984 and whose remains were found in a rural part of Colorado last year, authorities said Tuesday.

Steven Pankey, 69, was arrested in Idaho on Monday after he was indicted by a Weld County, Colorado, grand jury on a first-degree murder charge and other counts, the Weld County district attorney said.

Jonelle disappeared from her home in Greeley, Colorado, on Dec. 20, 1984, after performing in a Christmas concert. Her remains were found in July 2019 in a rural area of Weld County now dotted with oil and gas wells as crews were working on a pipeline.

“For over three decades, the disappearance of Jonelle Matthews has left our community with many unanswered questions and a void that has not been filled,” Jones said at a news conference Tuesday.

“With the arrest of Steve Pankey for the murder of Jonelle Matthews, some of these questions are starting to be answered,” he said.

Jonelle died from a gunshot wound to her forehead, and Pankey is accused of shooting her during the course of the kidnapping, according to Weld County District Attorney Michael Rourke and the indictment.

Rourke called the discovery of the remains significant, but he said that Pankey had been a person of interest since 2018.

The case went to a grand jury in August, Rourke said. The jury returned the indictment Friday and a warrant was issued for Pankey’s arrest, he said.

Pankey apparently knew he was a person of interestate last year. He told the Idaho Statesman newspaper in September 2019 that he was under investigation in the killing of Matthews and a search warrant had been executed.

He told the newspaper then that he did not know Jonelle or her family and or anything about the girl until six days after she was last seen. “I have nothing to hide,” he told the Statesman.

Pankey attended the same church as the Matthews in 1978, and he may have known them through that, Rourke said.

Pankey, who twice ran for governor of Idaho in the past in what were described as long-shot bids, was being held at the Ada County, Idaho, jail with no bail, Rourke said.

The disappearance of Jonelle was mentioned by then-President Ronald Reagan in 1985 when he aske the National Newspaper Association to regularly publish information of missing children as a “mission of mercy,” according to records from the presidential library and museum.

Jonelle’s information was one of the first featured on the National Child Safety Council’s national milk carton program, in which photographs of missing children and other information was printed on the cartons, Rourke said.

Pankey will be extradited from Idaho to Colorado to face charges, the district attorney said.

It was not immediately clear if Pankey had an attorney who could speak on his behalf Tuesday night. A number for his home in Meridian, Idaho, where he was arrested Monday, could not immediately be found.

Pankey claimed to the Idaho-Statesman last year that on the night Jonelle disappeared he was home with his wife at the time with their car loaded up for a visit to California to visit family for Christmas, and they planned to leave the next day.

Among other evidence considered by the grand jury in returning an indictment against Pankey was that his now ex-wife said that trip started on Dec. 22, 1984, two days after Jonelle went missing, and that the trip was unexpected, according to the indictment.

The ex-wife said that on the way back Pankey uncharacteristically listened to the radio, searching for news of the girl’s disappearance, and when they got back to Greeley on Dec. 26 he forced her to read newspaper articles about the case.

After getting back home Pankey “began digging in their yard” and a car that was on their property caught fire and was disposed of at a salvage yard, the indictment says. They lived around two miles away from the Matthews home at the time.

The ex-wife said that in 2008 she heard Pankey say at the funeral of his son, who had been murdered, “I hope God didn’t allow this to happen because of Jonelle Matthews,” according to the indictment.