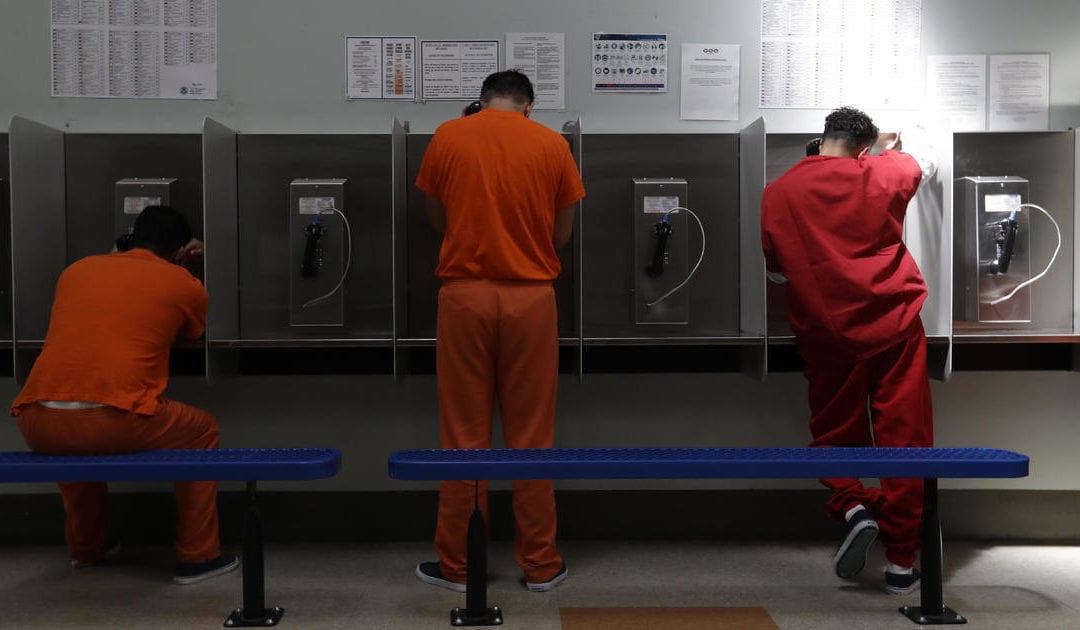 The coronavirus pandemic has killed more than 23,000 people worldwide, including more than 1,000 in the U.S. It has paralyzed the U.S. economy and changed nearly all facets of American life.

To curb the rapid spread of the contagion, cities and states across the U.S., from Houston and New York, to California and New Jersey, have released thousands of low-level offenders from custody, as well as older inmates and those with preexisting medical conditions. Countries like the United Kingdom have moved to release hundreds of detained immigrants. The top United Nations human rights official, Michelle Bachelet, has urged governments to reduce their incarcerated populations.

But U.S. Immigration and Customs Enforcement (ICE), which controls the largest immigration detention system in the world, has so far resisted calls to significantly downsize its detention population, despite a flurry of lawsuits and positive coronavirus cases in its facilities.

On Tuesday, the agency announced the first case of COVID-19 among the more than 38,000 detainees currently in its custody. On Thursday, New Jersey officials announced a second case, saying a 52-year-old immigrant held by ICE in Newark also tested positive, which an ICE official later confirmed. Four staff members at facilities used by ICE to hold immigrants in New Jersey, Texas and Colorado have also tested positive.

Lawyers believe their clients are sitting ducks in crowded detention centers that have long been plagued by reports of poor hygiene and subpar medical care. The detained immigrants and asylum-seekers are growing increasingly desperate, feeling powerless to protect themselves from the deadly contagion.

“We are very scared,” María, a 23-year-old Cuban asylum-seeker held at a for-profit prison in Jena, Louisiana, told CBS News in Spanish. “We know we can die inside here. The situation does not bode well for us. We don’t have a way to protect ourselves.”

On Wednesday morning, ICE officials held an “informational briefing” on COVID-19 at the facility where María has been detained for months. María said fellow immigrant women in the cell started protesting after the staff gave “evasive” answers to their concerns. After some of them tried to leave their housing area, María said staff pepper-sprayed them and locked the group of more than 70 women, even those who did not try to leave, inside for more than 30 minutes.

Attorneys and advocates said the immigrants wanted the staff to do more to protect them from the coronavirus. According to ICE, the detainees were “combative” and “disruptive.” The agency said some in Texas were placed in solitary confinement and are facing disciplinary charges.

On Tuesday and Wednesday, a coalition of advocacy groups led by the American Civil Liberties Union (ACLU) asked four federal courts across the country to order the release of immigrants in California, Pennsylvania, Maryland and Massachusetts who are at increased risk of severe illness from the coronavirus.

Another lawsuit on Wednesday by the Southern Poverty Law Center in federal court in California demanded that ICE take steps to safeguard the health of vulnerable immigrants, and asked the court to order their release If the agency can’t do so. In its lawsuit last week seeking the release of migrant families with children in Texas and Pennsylvania, the Refugee and Immigrant Center for Education and Legal Services also cited the pandemic.

Because immigration detention is a civil matter meant to ensure immigrants show up to court hearings, ICE has broad authority to release detainees.

Despite the intensifying pressure, ICE has not revealed any policy for releasing detainees. A spokesperson said the agency has “not made any announcements regarding the detained population,” but added that officials make “custody determinations every day, sometimes releasing people” for “a variety of reasons.”

Instead, ICE’s detainee population increased last week, even as the public health crisis deepened, according to government figures. The agency went from detaining 37,311 immigrants on March 14, to holding 38,058 people as of March 21. The number of detained asylum-seekers who established credible fear of persecution in their home countries grew by nearly 300.

“They are not protecting us”

María, the asylum-seeker in Louisiana, asked for her name to be changed because she fears reprisals for speaking out. Detainees at the ICE detention center in Jena feel like “children,” María said, and are unable to implement the hygiene and social distancing measures experts say are the only ways to mitigate the spread of the coronavirus.

“They are not protecting us,” she said, referring to staff at the facility, which is operated by the private prison company GEO Group.

A GEO group spokesperson said the company has taken “comprehensive steps” to mitigate the risk posed by the coronavirus pandemic. “We strongly reject these unfounded allegations, which we believe are being instigated by outside groups with political agendas,” the spokesperson added.

Having struggled with severe asthma for much of her life, María feels particularly vulnerable to the coronavirus. She’s not alone.

The immigrants named as plaintiffs in the lawsuits filed in recent days are all at higher risk of getting severely ill from the coronavirus because of their age or underlying health issues. They include an 82-year-old grandfather with “significant medical and neurological illnesses” detained in California; a 63-year-old man with prostate cancer held in Massachusetts; and a 51-year-old Guatemalan immigrant detained in Pennsylvania who was recently coughing blood and has gotten the flu four times while in detention.

ICE has said it has taken the necessary measures to prevent the spread of the coronavirus in its facilities, some of which experienced outbreaks of mumps, measles and flu last year. The agency said it has implemented new and existing protocols to screen new detainees, and isolate and treat those with symptoms. It has also suspended family visitations at detention centers.

In response to a lawsuit filed last week by the ACLU in Seattle, Justice Department lawyers said the argument that detention “poses an increased risk of health complications or death from COVID-19 is purely speculative.” The government lawyers said immigrants at a detention center in Tacoma, Washington, have “greater access to robust medical care than the general public.”

“Ordering their release … would leave Plaintiffs without their present access to health care would arguably put Plaintiffs at greater risk of serious complications in the event that they contract COVID-19,” the government said in a filing.

“Everything that we know about health care in ICE facilities flies in the face of that assertion. There have been a record number of deaths alone this year, as compared to other administrations,” Cho said, referring to the deaths of 10 immigrants in ICE custody registered this fiscal year.

“Medical care that is provided in ICE facilities is widely known to be substandard, so it is shocking to hear ICE claim that people are better off in detention than outside,” she added.

Cho said she’s also concerned that the agency has revealed little publicly about the number of detainees it has tested for the virus. As of March 4, the agency had tested four immigrants.

In New Jersey, where ICE’s “patient zero” is being held, the advocacy group Make the Road has been working to release two immigrants from detention, including Yimy, a 25-year-old transgender asylum-seeker from Honduras detained at the Hudson County Correctional Facility. One of the group’s attorneys, Jackie Pearce, said Yimy and other detainees are feeling “desperate.”

“With COVID-19 spreading in the detention centers, this is a human rights disaster waiting to happen,” Pearce told CBS News. “Our clients are stuck in cages and they are sitting ducks.”