Ice boating: the speed sport like nothing else in Colorado 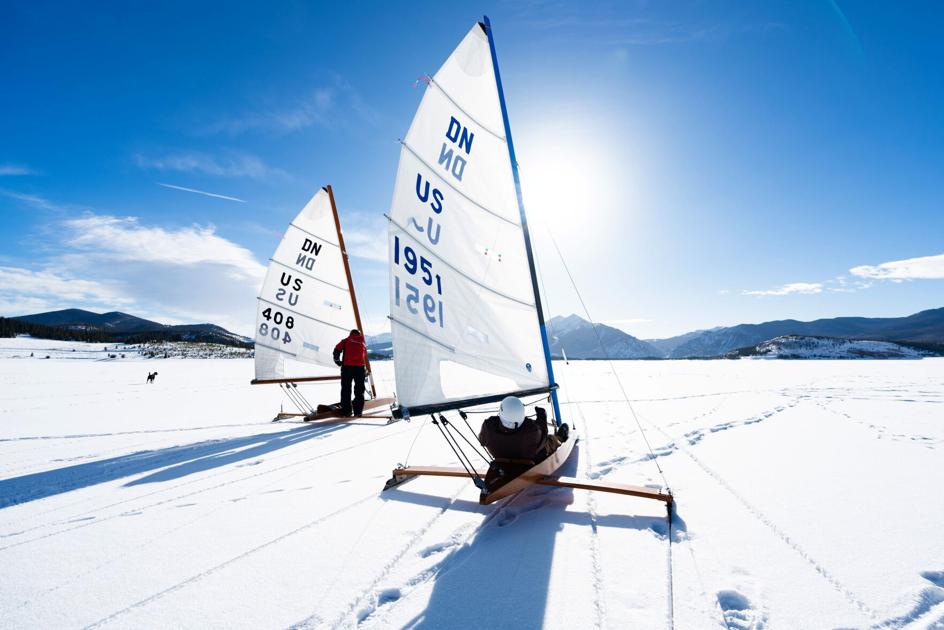 A few winters ago on the frozen shore of Dillon Reservoir, Dan Burnett was surprised to meet a sailing all-star, Buddy Melges, whom Burnett learned was on a family skiing trip here in Summit County.

Burnett was even more surprised by the following interaction.

The visiting legend had just watched the local fly across the ice in the extremely niche act of ice boating. “He said, ‘Could I take your boat out for a quick ride?’” Burnett recalls.

No was the answer.

“I mean, how obnoxious could I be? It was like telling Mario Andretti he couldn’t drive your car!” Burnett says.

“But it makes the point: You don’t lend out your ice boat, because it could smash into bits, and the person will get killed, and that would not be good.”

Such is the risk Burnett has run for decades on Dillon Reservoir, along with a few other lifelong, retirement-age sailors who know no offseason.

The large body of water under the gaze of the Gore Range turns solid, and on perfect afternoons, the wind blows just right for a thrill unlike anything else — unlike even the famed skiing steeps surrounding them.

With a slender hull sitting atop three metal runners or “skates,” ice boats can soar three to four times the speed of the wind. For the small group on Dillon Reservoir, 80 mph is not uncommon.

They’re happy with modest breezes; 10 mph is enough to send them cruising near 40 mph. They need thick ice, of course; anyone doing it long enough has a story of falling in due to sudden, undetected fragile spots. They prefer some snow to give them some foot-propelled traction for pushing off. But too much snow means too much friction and little to no speed.

“Clearly,” Burnett says, “ice boating is for people who want to scare the heck out of themselves.”

One of his friends, Tim Seeling, has enjoyed a career of racing on water and on skis and hang gliding. But nothing quite compares with sailing on “hard water,” he says.

“It’s just crazy. I mean, your butt is only 6 inches off the ice, your head is maybe a foot off the ice, and maybe you’re going 80 mph. It’s amazing.”

But the spectacle is not often witnessed in Colorado.

The sport is more popular in the Midwest and along the East Coast, regions that have the benefit of more water. Still, enthusiasts there, like enthusiasts here, count on those just-right conditions, similarly tricky to achieve.

Whitehorse grew up ice boating in Madison, Wis., where she is now an organizer for the local yacht club and for the sport’s international association. Madison is one of the country’s premier ice boating bases. And yet, “there’s people who grew up here and have never seen it,” Whitehorse says.

At Dillon Reservoir, the fickleness of it all means Burnett, Seeling and their four fellow ice boaters might get anywhere from three days to three weeks on the ice every year. When the opportunity presents itself — the thick ice, the ideal wind, the limited snow — one calls the other, who calls the other and so on.

And then sometimes they have to wait for wind. Sometimes it’s all for naught.

Says Whitehorse: “Ice boaters are eternal optimists. They have to be.”

So they are in Colorado.

The right elements on the Front Range tend to be even harder to come by, but nonetheless Drew Smith tries his luck on Denver’s Cherry Creek Reservoir every winter. He and two other ice boaters he knows are lucky to get six days in, he says.

Recently, Smith introduced a pair of sailors to the sport on ice. “Whenever I bring friends out, their mouths are like ripping with smiles,” he says. “They can’t believe what happens with the speed.”

Optimal ice boating was realized after 1937, when The Detroit News sponsored a homebuilding contest. That resulted in a design that remains the global standard today: simply known as the DN, with a hull 12 feet long and 21 inches wide, a 16-foot mast and a runner plank stretching 8 feet across.

Among people willing to put in the time and money without getting much use, DNs are still fashioned in garages today. But one does not simply break into ice boating, veterans warn.

Considerable knowledge and skill is required, they say, with the consequences multiplied on ice. A slight, incorrect maneuver at high speed could topple the vessel and fling the one steering the front skate with one hand, the sail with the other.

“If you don’t have the instincts and know how wind and sails work, you can get into a lot of trouble,” Smith says.

Before they were recreational, ice boats were practical. On Dutch canals in the 17th century, merchants continued to ferry goods efficiently, though more perilously, in the frozen months.

America’s first ice boats are believed to have appeared on New York’s Hudson River in the late 1700s. “Ice yachting” clubs formed and devised races. Such clubs continue as ambassadors.

And some see an uncertain future for their sport. Some have voiced concerns about global warming further reducing opportunities on ice. Others nervously look around at their aging ranks. They have noted the appeal being lost on the next generation, who would rather not bother with the time and money. They seem more interested in the stoke activities of the mainstream, the skiing and whatnot that dominates social media.

So the ice boater’s optimism is tested.

“I see us dying out,” Burnett says.

Fifty years ago, he was a 12-year-old asking some old-time sailors how he could go fast like them. Later, he found himself responding to inquisitive kids. “Not anymore,” Burnett says.

But if anyone asked, he might describe to them the ultimate escape he gets from ice boating.

“Because of the intensity of the situation, the nature just feels really beautiful,” he says. “All of the colors, all of the sounds, all of the things you experience in nature intensify. The crystals shining in the sun, the snowflakes, the beauty of the ice, the mountains, the sound of the ice groaning underneath you. It’s all very intense.

“And that’s an addicting thing. You want your senses to be tuned up full blast.”