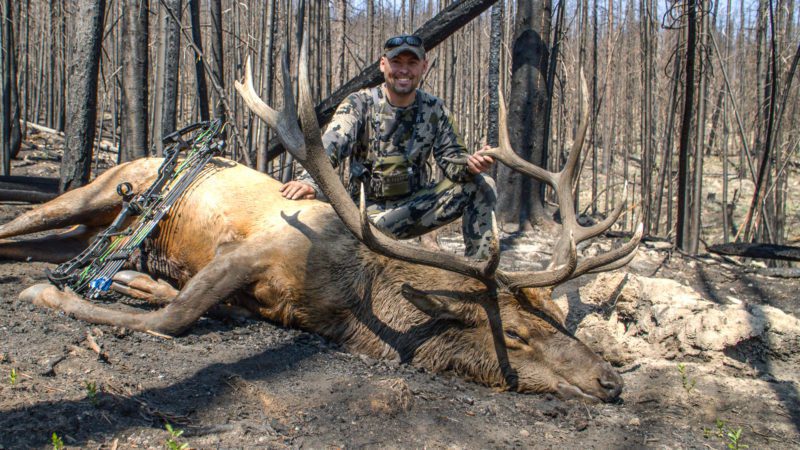 It was late by the time I arrived, so I pulled some stuff out of my vehicle so I could just sleep in the back. My plan was to hunt the edge of a burn over the next few days. The following morning, I ended up driving around the entire unit until I found a one-lane jeep trail. I had no idea how bad the road was until I got part way up it, and there was no turning around.

The drainage on my left was what I wanted to hunt. I got to a wide spot in the road and realized I couldn’t get any further. I parked the car to review the area on my onX map. With the windows down and the vehicle off, I heard a bugle sound off. I quickly jumped from the car to confirm whether I was hearing a live bull or another hunter.  When I heard it again, I knew I was hearing a real bull. I grabbed my gear and took off for the top of the drainage.

When I got to the top, I setup and did some cow calls. He immediately responded, as well as another bull farther down the drainage. I moved higher to keep thermals in my favor and moved up the side of the drainage he was on. When some time passed without hearing anything, I decided I would follow the burn edge down to where I thought he might be.

Around 5pm, I heard him bugle. Realizing how quiet walking in the ash was, I used the burn to cut the distance. After covering some distance, I spotted a cow bedded down in the timber. I dropped to my knees, took my pack off,  and kept inching forward to get to the herd.

I couldn’t believe my eyes when I started seeing all the cows. I could hear them calling back and forth, and the bull just kept getting fired up. The whole herd was moving in my direction. I was shaking so bad my arrow was making all kinds of noise on my rest.

Despite the meat smelling like it was spoiled, I took it to the local butcher, hoping I could salvage it. The butcher shop crew felt bad for me, but confirmed what I already knew. There’s nothing that could be done with the meat. Just leaving him lay overnight was enough to ruin most of the meat.

Losing the meat was devastating. I hunt for meat. I search for antlers to challenge myself and practice good conservation. It was a tough lesson learned and hopefully my story will help others to be better prepared when they find success on the mountain.