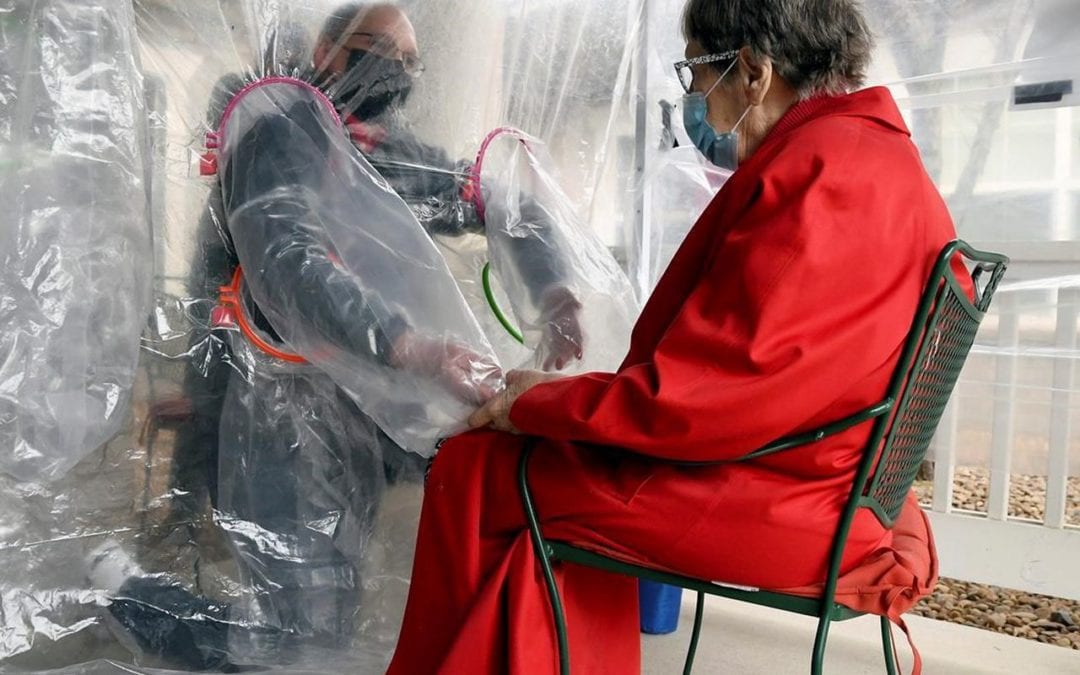 It had been at least eight months since she touched her 77-year-old husband, Len, who has dementia and has been at an assisted living centre in suburban Denver for the last year.

On Wednesday, she got a small taste of what life was like before the coronavirus pandemic.

Thanks to a “hug tent” set up outside Juniper Village at Louisville, Hartman got to squeeze her husband — albeit while wearing plastic sleeves and separated by a 4-millimeter-thick clear plastic barrier.

Hartman, who fractured two vertebrae and could no longer take care of her husband by herself, said she thought he was a little confused but that it was important for them to embrace again.

“We’ve been trying to do it for a long time,” she said. “It felt good. I kept hitting his glasses when I hugged him, though. And he got cold.”

Although the setup wasn’t ideal, Hartman said, “At least you can do something, and it’s important.”

Since the pandemic hit, similar tents have popped up around the country and in places like Brazil and England, where some people call them “cuddle curtains.”

The assisted living facility in the Denver suburb of Louisville, which has fully vaccinated its residents and staff, partnered with non-profit health care organization TRU Community Care to set up the tent with construction-grade plastic on a blustery but warm winter day this week.

“I think it’s just a huge weight off their shoulders, just being able to have that hug that they haven’t had in so long,” said Anna Hostetter, a spokeswoman for Juniper Village at Louisville. “When we were planning this and setting it up, and I saw pictures, I wasn’t sure if with all the plastic and everything you could really get that human contact. But I teared up on some of them. It was really special for our families.”

The hug tent will go up again Tuesday, and staff are planning to keep hosting them.

For Gregg MacDonald, holding hands with his 84-year-old mother, Chloe MacDonald, was important because they hadn’t touched since April. She likes to get updates on her grandson and granddaughter.

“Time is a precious commodity, so while we all wait to get back to more normality, in the meantime, everyone is doing what they can,” Gregg MacDonald said. “So I appreciate any efforts that they are making to allow us to have more contact with everybody.”

Amanda Meier, project co-ordinator for TRU Community Care, said she, her husband and some volunteers built the hug tent around a standard 8-by-8-foot popup frame and attached the construction-grade plastic with glue and Velcro. Plastic arm sleeves built into the tent are attached with embroidery hoops.

Since the beginning of November, she has helped set up four hug tents in Colorado and said the feedback has been positive.

“Lots of tears, but happy sort of tears, and a lot of shocked expressions of how in the world can we be doing something like this. It’s so weird,” Meier said.

But after the initial weirdness, the benefits are clear, she said.

“You can see sort of relief in their bodies and their faces when they finally get to have that physical contact, which is really a basic human need. And in these facilities, a lot of times they’re missing it anyway because they’re just not with their families,“ Meier said. ”I don’t think it’s measurable, really. You just know it when you see it and feel it when you’re there.”