How will Colorado make sure communities of color get vaccinated against COVID-19? 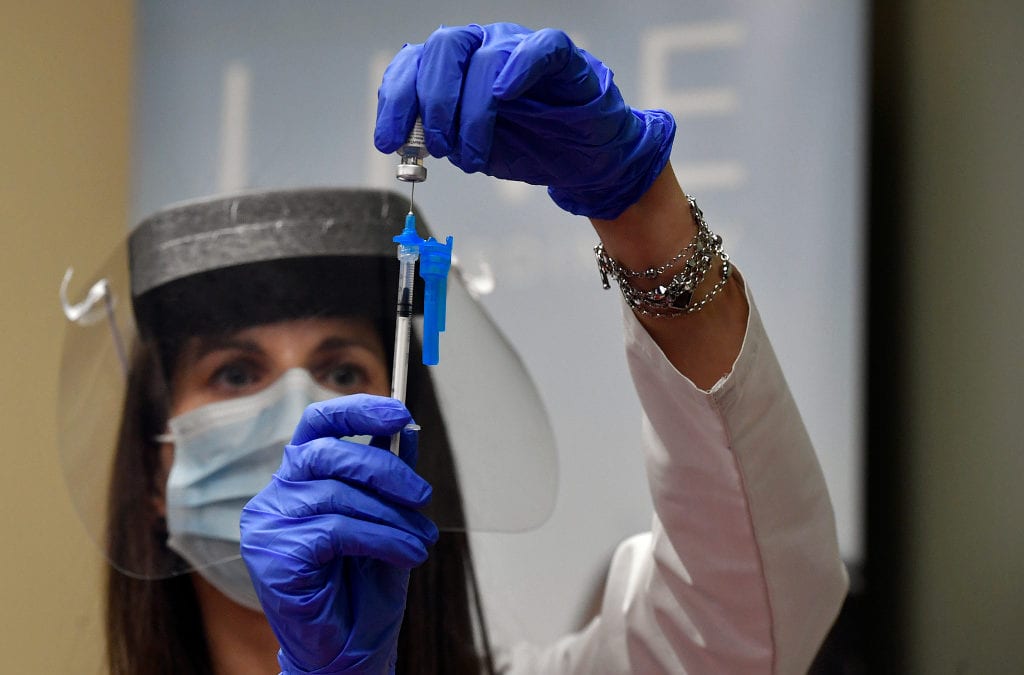 For much of the week, images of Colorado health care workers receiving the first doses of the COVID-19 vaccine flashed on screens — hope had arrived in the form of tiny vials, and as Gov. Jared Polis greeted a FedEx courier delivering that first fragile package, he declared, “This is the beginning of the end.”

But as state leaders begin to take on a historic mass vaccination campaign, it’s still not clear how they will distribute the vaccine to the wider public nor how they will ensure people of color — who’ve experienced some of the highest rates of infection and death — and disadvantaged communities get vaccinated for COVID-19.

“I would say it’s a work in progress as we partner with the local public health agencies and communities to plan for the Phase 2, and clearly the principle of giving those first doses to those most in need, will be at the top of our plans, “ said Dr. Eric France, chief medical officer with the state Department of Public Health and Environment.

The arrival of the first doses of the COVID-19 vaccine occurred quickly. It was just a month ago that Pfizer announced the shots were more than 90% effective in preventing the disease caused by the novel coronavirus.

Distribution is also expected to take months, with the state health department predicting that it won’t be until spring that Colorado enters the second phase of its vaccination framework. That’s why people are encouraged to continue wearing masks, washing their hands and social distancing.

As the state undertakes these efforts, officials will need to work on repairing relationships and distrust in communities of color in order to have an effective public health response, said Karla Gonzales Garcia, policy director of the Colorado Organization for Latina Opportunity and Reproductive Rights.

“Our people are dying at higher rates,” she said. “I haven’t seen any strong education program coming from the governor that can help rebuild this trust in order to take care of everyone. In order for this to work, everyone has to be safe and healthy.”

One of four vials of COVID-19 vaccine, right, sits next to a bottle of sodium chloride before it is reconstituted and ready to be administered to awaiting front line health care workers at UC Health Poudre Valley Hospital in Fort Collins on Dec. 14, 2020. The vaccine is on the right in this photo.

When will people of color get the vaccine?

For now, COVID-19 doses are limited to health care workers in closest contact with coronavirus patients and those living and working in long-term care facilities. Then, through the winter, the shots will be available to other medical employees, first responders and people who work in home health, hospice and dental settings.

It’s when distribution enters the second phase that things remain murky. That phase covers a large swath of individuals, including essential workers and people with underlying health conditions that put them at a high risk of complications from the novel coronavirus.

When the Colorado Department of Public Health and Environment revised its distribution framework, it no longer prioritized any of the groups listed within Phase 2.

Eventually, the agency will do so, but Executive Director Jill Hunsaker Ryan previously said officials were waiting for further guidance from a national advisory committee.

The state health department will work with Denver Health and Denver Public Health on who should get vaccinated in the second phase, France said during a media briefing on Wednesday.

“I know that Denver Public Health will be thinking about those communities that have the highest rates of disease, and are at the highest risk of hospitalization and will likely be prioritizing those areas for those first doses,” he said.

While the health department revised its phased approach to vaccine distribution, it has not released a final report that delves into as much details as the agency’s draft plan released in October.

Under its draft plan, the state health department repeatedly acknowledges systemic racism and notes that people of color have become sick and died from COVID-19 at a disproportionately high rate. But it does not specify they should receive higher prioritization for a vaccine — an issue that has been debated by public health experts across the country.

By prioritizing individuals at high-risk of exposure and severe disease in the second phase, the plan addresses “both the ethical principle of trying to save the most number of lives, while also working to address racial inequities.”

It does this in the second phase because people of color are more likely to live in high-density areas, be an essential worker or have underlying health conditions, according to the document.

“There’s an overrepresentation of communities of colors in those essential services that are front-facing,”  said Dr. Anuj Mehta, a pulmonary and critical care physician at Denver Health and National Jewish Health.

The reason the draft plan does not prioritize when someone will receive a vaccine based on their race or ethnicity is because “by doing that you are not getting at the heart of who is most at risk,” he said.

By focusing on jobs that put people at high risk of exposure to COVID-19 — as the state does under both the draft plan and the newly revised framework — public health officials are able to address racial inequities, said Mehta, who worked on the recommendations for the health department.

For example, health care workers in nursing homes are more likely to be people of color so they are covered under the long-term care facility employees that are part of the first phase, he said.

“They go to work and provide an absolute essential service,” Mehta said. “They go back home having been exposed to work and they transmit it to older family members in their generational home.”

Addressing mistrust and history of racism

Another reason the draft plan did not prioritize people based on race or ethnicity is because public health experts heard through conversations with the community that if people of color were given the vaccine first, it could increase vaccine hesitancy and reduce the number of people willing to get the shots, Mehta said.

Medical and public health experts said one of the big drivers behind the hesitancy to get the vaccine is mistrust in the government, particularly given the nation’s history of unethical experimentation on people of color. The state is trying to address this through communication and public health messaging to help inform people of the safety of the vaccine.

The Native American community will always deal with historical trauma with any health care situation in the United States, but is trying to do its part in educating patients and community members about the importance of the vaccine, said Adrianne Maddux, executive director of the Denver Indian Health and Family Services.

“Once the vaccine starts rolling out, we will probably host some information presentations online and share links on social media with education about it,” she said. “We understand that people have to make decisions for themselves, and we respect that. We don’t want to force the vaccine on anyone, but it is our duty to educate about the importance of it.”

The Department of Public Health and Environment created the “Champions for Vaccine Equity Initiative” in the fall, which will work to build relationships with communities of color about vaccine importance and safety, said a spokesperson for the agency in an email.

As a “champion,” Dr. Terri Richardson, vice chair of the Colorado Black Health Collaborative, has been meeting with different groups across the state to address their concerns about any COVID-19 vaccines.

She said that history is still present in her community and that people bring up the Tuskegee Study when they talk about their mistrust of the vaccine. The 40-year-old study withheld medical treatment from Black men with syphilis, despite researchers telling them that they were being treated for the venereal disease.

“We remember those things so we can’t just pooh-pooh it,” Richardson said.

She said that’s why it is important to remind people that researchers worked to make sure people of color were part of the vaccine trials. The health systems in Colorado are also reviewing the safety data themselves, which is providing another check on the vaccines’ safety.

He spoke during a media briefing with the state health department and local medical experts on Wednesday.

“So I felt the vaccine itself was safe,” Rouse said. “It is safe. Everyone should get it.”

Still, Richardson said she understands people’s fears about the vaccine, saying that while she wants to get the vaccine she doesn’t want to be the first in line.

“I try to be truthful: I have fear, too,” she said. “But look at how many people have died from COVID.”