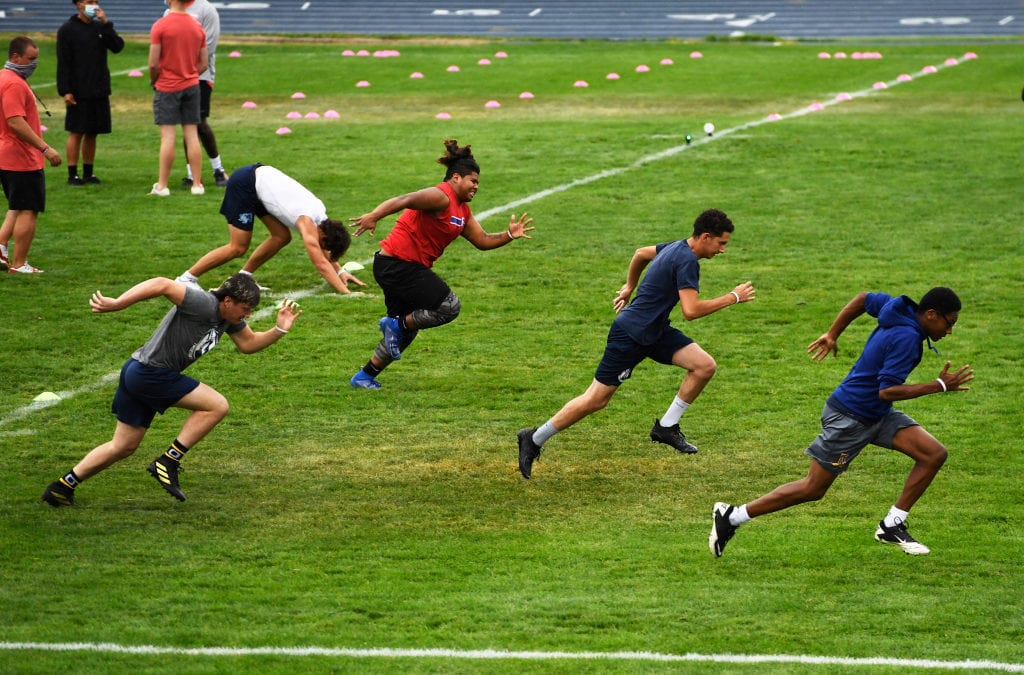 Every wrist band had a number and a story. Colten Brueggeman and his father, Eric, drove in from Montrose, five hours up U.S. 285, only to be greeted by spitting rain at de La Salle Stadium Friday evening.

The temperatures were cool and the wind light, perfect conditions for a timed 40-yard dash. The slick grass?

“Our stadium in Montrose, the field is muddy,” Brueggeman, a senior lineman/end, mused from the Mullen High School parking lots. “I’m used to this. If anything, I’ve got an advantage.”

With a strapping 6-foot-3, 260-pound frame and a 7-foot wingspan, Brueggeman was on the college football radar as a freshman and sophomore. He excelled in wrestling, too, and more than a dozen schools pursued him as a lacrosse goalie. Colten decided as a junior that he was going to commit to the latter pretty much full-time. Just like that, the football calls stopped.

The kid’s been playing catch-up ever since. Or trying to. Colten’s father had signed him up for summer 2020 football camps at CU and CSU — one last look. COVID-19 wiped out the entire slate.

“This stadium,” Colten said, “is full of heartbroken kids.”

It was full of seniors, cycled in 25 at a time, wearing white bands on their wrists and enough chips on their respective shoulders to fill a 16-inch serving bowl.

More than 150 football players from the class of 2021 turned up for a free, pro-style testing combine under the Friday night lights at soggy Brother Bernard Kinneavy Field — a joint production of Ponderosa and Mullen high schools, Pivotal Sports Performance and Athletafied testing services.

“I think it gave kids something to look forward to and to train toward,” said Ponderosa football coach Jaron Cohen, who got the ball rolling for the combine in early August, shortly after CHSAA announced that the football season had been moved to the spring of 2021.

“They’re getting a document that they can give their head coach and they can promote, and it’s going to be verified by Athletafied, which is the gold standard in the combine business.”

Although some parts of that business also rubbed Cohen the wrong way, especially for upperclassmen who were victims of circumstance that suddenly found themselves having to pay hundreds of dollars in order to wrangle certified times to send to prospective college football programs.

“I don’t begrudge a guy for making a buck,” Cohen said. “But when I saw some of what was going on — I’ve worked in inner-city schools. It just didn’t sit right with me.”

Patrick Nolan, owner and founder at Pivotal and the head strength-and-conditioning coach at Ponderosa, got on board to fix the situation. So did Matt Logston, vice president of operations with Denver-based Athletafied, whose clientele includes the Under Armour All-America and FBU Top Gun Showcase camps. A call to old friend Jeremy Bennett, the first-year football coach at Mullen, secured the facility for what was supposed to be the opening weekend of the 2020 season.

And not everybody got the kind of camp exposure, or had the kind of stats, to impress prospective recruiters while they were sophomores or juniors. Seniors who attended the combine were given wrist bands, measured for height and weight and given the opportunity to participate in all or some of a half-dozen timing stations. All the information was then gathered onto a profile on the Athletafied app, which they could send on to college coaches or recruiting coordinators.

“Being a senior, I know this means a lot to me,” Cherry Creek lineman Domingo Prince II said. “Just because I never really thought as a kid, growing up, I’d live through a pandemic — and still be living through it. But it’s an opportunity to show people what you can do.”

With the NCAA recruiting calendar trending earlier and earlier, football late-bloomers already face an uphill climb to get noticed. Which is why so many on Friday went out of their way to thank Nolan and the coaches on-hand for a free chance to plug verified data onto their dossiers.

“Just the smiles on their faces, that was the important thing,” Nolan said. “They were under the lights, really competing. You were supposed to be hitting someone today. You’re not, so let’s make the best of the opportunity.”

With football delayed, Logston said he’s hoping to put together three or four more combines around the Front Range this fall. And looking to open things up to underclassmen as well.

“Obviously, 2020 is kind of a funky year,” Logston chuckled. “I think (it’s great) if we can give some normalcy to the athletes and parents, to let them know we’re going to create an environment for them to compete. Obviously, they come away with some verified numbers and from there, they can do with it what they want.”

He’s got numbers to send them, now, at least. Brueggeman said he wound up running a 5.0 in the 40-yard dash, a pretty decent shake for a 260-pound lineman on a wet track who rolled up after five hours in the car.

“He’s usually around the 4.8, 4.9 neighborhood,” Eric Brueggeman said with a smile. “So that’s not bad on wet grass.”

Running in the rain? With a broken heart? Not bad. Not bad at all.