How to keep Japanese beetles out of your Colorado garden 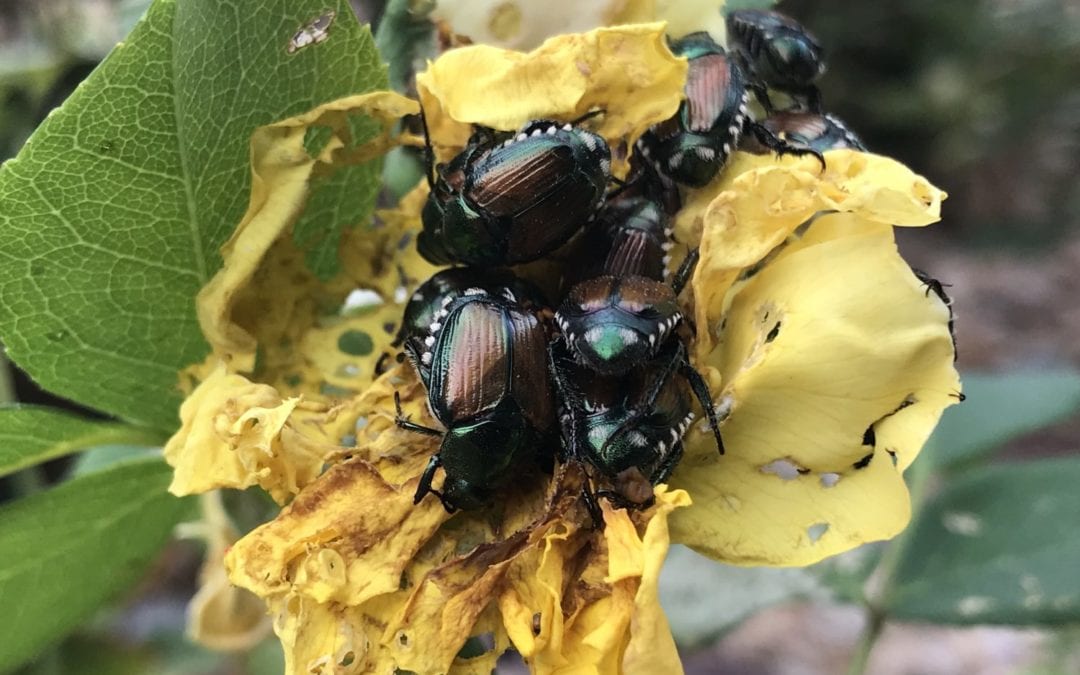 Blast! Japanese beetles are already beginning to emerge in some parts of metro Denver. Brace yourselves for their intense plant-eating, breeding and cursing from gardeners (not necessarily in that order).

Pesty Japanese beetles have been active in the metro area for five or more years and are on the move to west, north and east neighborhoods from central Denver. Boulder and Pueblo have had beetle issues for about as long as Denver.

But this summer, let’s fend them off with a four-step plan of action.

The good news for determining steps two through four is that Whitney Cranshaw, Colorado State University’s entomologist extraordinaire, has written an informative and helpful fact sheet on the Japanese beetle.

Pay attention to the Japanese beetle life cycle for one year and understand that effective management involves dealing with both adult beetles and their offspring (larvae, also called white grubs). Adult beetles feed on foliage, flowers and fruit of many plants (see the list below) while their offspring feed mostly on grass roots. Both stages damage plants.

The fact sheet includes excellent management recommendations for both life stages. Circle the ones that make the most sense to you based on your time and pocketbook. When opting for spray products (including organic), some are pricier than others if you choose to use them regularly all summer into fall.

Cranshaw has listed the trade and common names of products to use as sprays, injections or granular spreads. Persistence of product application on plants is indicated and whether it is OK for use on food crops. Pay attention to the information provided on pollinators and beneficial insect hazards.

You may opt to do nothing. Trust me, you’ll incessantly complain about the out-of-control Japanese beetles to anyone who comes within earshot. Eventually, they will ask you to please stop whining and suggest that you move. Maybe they will help you pack your bags.

There are other ways to reduce beetle feeding other than spraying. The most rewarding and immediate control method is to remove adults and drown them in soapy water in the morning or evening when they are sluggish and easy to remove. I put on my dedicated Japanese beetle battle garden gloves and with a quick wrist snap, I flick one or groups at a time into a pan of Dawn liquid. Once the container is full, I drain the liquid, then toss the bugs in the garbage.

If you or anyone you know keeps chickens or goats, give the beetles a quick rinse and offer them as a tasty treat for the animals.

Many decades of science-based research on Japanese beetles says that it is OK to squish or pinch adults on the spot. Their smushed parts do not attract more beetles to the area; it is the chewed plant oils that put out the welcome sign.

I know retired people who flick beetles on their infested plants twice a day. (I don’t think they are available for hire. But if they wanted to start a business, here’s a good idea for their web page:  Japanese Beetle Removal. The No. 1 Firm in Flicking. “We flick so you don’t have to.”)

There are other hands-on ways to reduce Japanese beetle egg-laying and adult beetle feeding. Keeping lawns on the drier side during peak egg-laying months (July-August) will reduce eggs from growing to the next larvae/white grub stage. In other words, the eggs can’t survive without adequate moisture. Be careful, however, when reducing lawn watering to the detriment of tree health, since many tree roots grow all through lawns.

Taller grass, kept over 3 inches in height, is less attractive to females for egg-laying. Plus, tall grass shades grassroots, which is healthy for lawns and keeps weeds down.

Using lightweight, inexpensive covers as a barrier to adults can work. Japanese beetles can see the basil, but they can’t get to the basil (take that!). I purchase veil cloth, also known as tulle, from local fabric stores and cut to the sizes I need. The cover allows the basil to get enough sun and air for growth; plus, the fabric lasts a few years. But basil is one of the few edibles that doesn’t require pollination;  avoid using cloth coverings on vegetables like green beans, which need bee pollination.

Japanese beetle traps contain a pheromone that attracts both male and female beetles. It has a stronger calling card scent than a trail of ants on spilled lemonade. Traps are sold everywhere and catch a ton of beetles. But science shows that they attract more beetles to surrounding areas and end up feeding on more of your plants. If you’re lucky, your next door neighbor uses one, reducing the number of beetles on your property.

Betty Cahill speaks and writes about gardening in Colorado. Visit her blog for more gardening articles.