How high will the blue wave crest in Colorado? Democrats are predicting big wins once again. 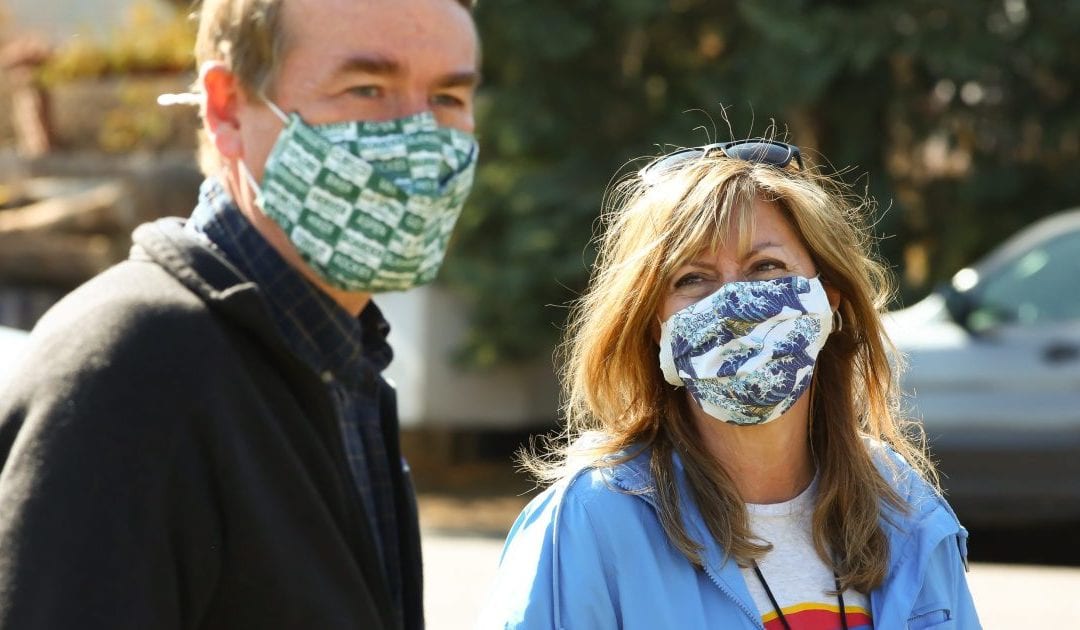 In the final days of the 2020 campaign, Lisa Cutter is not taking anything for granted.

The state representative is the first Democrat to win her western Jefferson County district, part of a Democratic wave in 2018 that gave the party control of state government and the lawmaking process.

Cutter feels the pressure to win again. Even as other Democrats shun in-person campaigning, Cutter’s team went door-to-door to talk to voters on Saturday. “I don’t think I have this in the bag by any means,” she said. “I can’t. You have to keep working to earn it.”

Democrats are poised for big wins in Colorado at the top of the ticket in the presidential and U.S. Senate contests. The question is how high the blue wave will crest — and whether it will once again help carry Cutter and other down-ballot candidates to victory.

The backlash against President Donald Trump and the state’s shifting demographics give Democrats hope for a repeat performance. But the challenge is two-fold this year: hold the ground the party won in 2018 and make more gains in traditionally conservative territories.

In the presidential race, Democrat Joe Biden enjoys an average 12 percentage point advantage against Trump in polling since September, according to The Colorado Sun’s poll tracker. And in the U.S. Senate contest, Democrat John Hickenlooper holds an average 9-point lead against Republican incumbent Cory Gardner in the final two months of the campaign.

The numbers make Democrats feel confident. If the party wins the U.S. Senate race, it will be the first time since 1936 that one party controlled the balance of power in Colorado, an analysis shows, and only the third time in a century.

“Democrats won in 2018 in unexpected places, so this one will be bigger and sweep even more Democrats to victory in races large and small,” said Craig Hughes, a leading Democratic strategist.

Republicans are bracing for the worst. “We are hinting toward shades of royal blue these days and less periwinkle,” said Lori Weigel, a prominent Republican pollster.

“This year has been like skiing uphill for Republicans — not just here in Colorado but in lots of states,” she continued. “Trump has been a big motivator for the base, but unfortunately he has clouded the picture for local issues in a way that is … not to the benefit of the state party.”

The races that will determine whether it’s a blue wave election in Colorado start with the 3rd Congressional District.

Diane Mitsch Busch is vying to become the first Democrat since 2008 to win the sprawling Republican-heavy district that stretches in a C-shape from Steamboat Springs around the Western Slope and over to Pueblo.

Two years ago, in the blue wave election, she lost to Republican incumbent Scott Tipton by 8%. But this year, she faces GOP firebrand Lauren Boebert, who defeated Tipton in the party primary by arguing he is not conservative enough.

The questions about Boebert’s politics give Mitsch Busch an opening, but she will need a big push in Pueblo and significant turnout in the blue-tinted ski counties in the district to make it competitive.

An analysis by Hilltop Public Solutions, a Democratic consulting firm in Colorado led by Hughes, suggests Mesa County — home to Grand Junction — is the key. It holds 20% of the likely voters in the district and Mitsch Bush lost it in 2018 by a 2-to-1 margin. Democratic polling suggests the race is a toss-up.

Given its history, “the fact that this race is even competitive is stunning,” a memo from the Democratic firm wrote.

Two other Republican-held congressional seats — the 5th District in Colorado Springs and 4th District covering the eastern half the state — look too out of reach for Democrats.

The impact of a blue wave election would be felt the strongest at the state legislative level.

The Democratic-majority in the Colorado General Assembly is not at stake. The party is expected to retain control of the state Senate, where it holds a 19-16 edge, and the state House, where it boasts a 41-24 advantage.

The size of its majority is what remains uncertain. The party is attempting to increase its majority but first it must hold its ground in a handful of battleground districts won in recent years.

The most competitive contest is in Pueblo, where state Rep. Bri Buentello faces Stephanie Luck. Buentello won the seat in 2018 from Republicans by roughly 300 votes, a victory that became clear only days after the election.

Democrats also are looking to flip two GOP seats in suburban Denver, including one held by Rep. Kevin Van Winkle, the No. 2 Republican in the House.

In the Senate, two swing seats appear solidly in Democratic hands and now the party is going on the offensive in three more districts as it seeks to boost the majority.

The Adams County seat held by Sen. Kevin Priola is the one to watch. Priola’s bipartisan record gives him broader appeal and helps explain why he won in 2016, despite the fact Democrat Hillary Clinton won in the district. But GOP operatives suggest the oncoming “blue tsunami” may be too powerful to overcome.

The two other competitive contests also are GOP seats: Senate District 27, where a Republican incumbent retired and Democrats are spending big to win, and Senate District 6 in western Colorado that will test the level of Democratic support in rural Colorado.

Right now, odds suggest Republicans could lose one seat in each chamber. “Some could go our way, some could go their way,” said Joe Neville, the Republican strategist working on House races. “I want to wait until Election Day and see what happens.”

Republicans hope to make their stand on ballot measures, but a wave could neutralize any advantage.

Colorado voters don’t like tax hikes, and the verdicts on a handful of ballot measures have given Republican a glimmer of hope. Only so-called sin taxes on marijuana, cigarettes and sports betting won approval in recent years, and broader Democratic efforts to increase taxes for education and roads failed.

In 2019, a year after the blue wave swept Democrats to power, conservatives successfully defeated a Democratic-led effort to lift caps on state tax collections in the Taxpayer’s Bill of Rights under Proposition CC.

This year, Democrats are advancing ballot questions to repeal the Gallagher Amendment governing property taxes with Amendment B; join the national popular vote compact with Proposition 113; increase taxes on tobacco and nicotine with Proposition EE; and create a paid family and medical leave program with Proposition 118. In addition, the party is working to defeat a ban on abortions after 22-weeks of pregnancy in Proposition 115.

Much of the polling shows the ballot measures are a toss up, but a strong Democratic turnout would help pass key measures and defeat others.

If the party can win either, it would give conservatives a much-needed victory in an otherwise glum year.