How dry is the Colorado River Basin? We explain it in 5 numbers 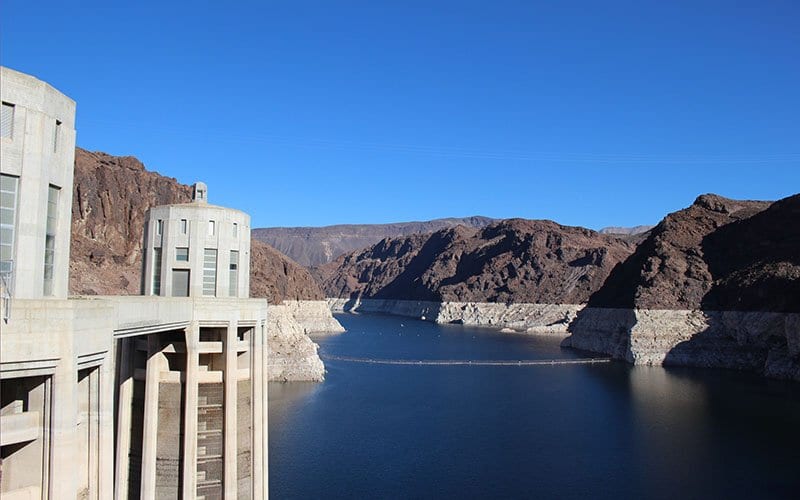 How dry is the Colorado River Basin? We explain it in 5 numbers

Dry conditions are the worst they’ve been in almost 20 years across the Colorado River watershed, which acts as the drinking and irrigation water supply for 40 million people in the American Southwest.

As the latest round of federal forecasts for the river’s flow shows, it’s plausible, maybe even likely, that the situation could get much worse this year.

Understanding and explaining the depth of the dryness is up to climate scientists throughout the basin. We called several of them and asked for discrete numbers that capture the current state of the Colorado River basin.

84% of Upper Basin in extreme to exceptional drought

This is the highest percentage of land in the river’s Upper Basin since 2002, which stands as the region’s driest year on record. The Lower Basin fares worse, with 93% of the land area in those categories.

Nancy Selover, Arizona’s state climatologist, said the Upper Basin figure is concerning because that accounts for the river’s headwaters. If it’s dry there, that means many more problems as the water flows downstream.

“This is when we’re supposed to be gaining and accumulating water in the form of snowpack, and that’s not happening,” Selover said.

Conditions have been deteriorating across the river basin since the summer of 2020. Monsoon rains didn’t arrive. Record-breaking high temperatures dragged well into fall. Even hardy desert plants, the ones well-adapted to water scarcity, have struggled.

“Creosote is one I personally like to call it the cockroach of the vegetation world because pretty much nothing kills creosote. It survives,” she said.

But even some creosote is dying, unable to take the one-two punch of both the hottest and driest conditions on record last year in parts of Arizona.

She compares the current drought conditions to 2018, another record-breaking hot and dry year just a couple years ago. It’s not quite as bad as 2002, she said, but it could easily get there.

Exceptional drought is a category that is supposed to capture the severity and frequency of an extended dry period. Climate scientists call it D4. For context, on the scale of “no drought” to “worst drought,” there’s no category that captures conditions more dry than exceptional.

“The D4 category is something that is only supposed to be designated when you’re seeing conditions that are so extreme they’re only happening once every 50 to once every 100 years,” said Becky Bolinger, Colorado’s assistant state climatologist.

The Colorado River basin has experienced three D4 droughts in the past 20 years, including the current one. 2002, 2018 and 2021 are the most intense dry periods on record for the basin.

“The droughts that we are seeing are becoming that much more severe because of the temperature component, they’re warmer,” Bolinger said.

The increase in temperatures means the atmosphere is thirstier. It sucks up moisture from forests, backyard gardens and crop fields with greater intensity.

In parts of the Colorado River basin, Bolinger said climate change has caused conditions on the ground to bump up against the designated drought categories.

“Even though conditions may be evolving and getting even worse, we don’t really have a way to depict that, because D4, that’s that ceiling,” she said.

Climatologist Jon Meyer with the Utah Climate Center said the number that captures the severity for him is 12 inches.

“That’s about the amount of water that our soils are behind in terms of what they normally would have,” Meyer said.

That deficit is about the same amount of precipitation that falls across Utah in an entire year. A year’s worth of rain and snow is missing from Utah’s ground.

“We are really in unprecedented territory right now, and it’s not even close,” Meyer said.

Because the deficit is so substantial, Meyer said it’s very likely the watershed will see drought conditions persist in 2021. Dry soils soak up snow when it melts, keeping it from rivers and reservoirs.

“It doesn’t matter if we get an incredible snowpack, our soils are so depleted right now that that’s not going to really translate to water coming down through the river systems,” Meyer said.

Forecasts don’t paint a pretty picture for snowpack either. It’s lagging in both the Upper and Lower basins, and the National Oceanic and Atmospheric Administration projects much of the watershed to tilt toward hotter and drier weather for the rest of the winter.

The Colorado River system’s reservoirs combined are currently less than half full. Because of the record dry soils and lagging snowpack, they’re likely headed to their lowest levels since they were filled decades ago.

“These reservoirs are as empty now as when they started filling Glen Canyon Dam in the 1960s,” said John Fleck, director of the University of New Mexico’s water resources program.

The low levels aren’t just causing hand-wringing among the West’s water officials. The dropping water and the reservoirs’ expanding bathtub rings are also tied to policy. As Lake Mead outside Las Vegas and Lake Powell in Utah decline, certain policies are triggered into action. Drought contingency plans for the Upper and Lower Basin are now in use.

The Lower Basin states of Arizona and Nevada have begun to see their deliveries from the river curtailed. Those cutbacks are likely to grow steeper in 2021. An official shortage declaration from the federal government could come as early as this year, as Lake Mead is currently projected to be below 1,075 feet in elevation at the end of 2021.

Meanwhile, Lake Powell’s projected decline in 2021 recently triggered the Upper Basin plan to be used for the first time. Water managers in the four Upper Basin states and the federal government are expected to start monthly planning calls this year to consider options for propping up the reservoir if needed.

“Reservoir storage is the best single number that captures two things: how much water nature provides and how much water humans are consuming out of that provision,” Fleck said.

“The reservoir is integrating all the problems we have, all the challenges we face show up in that one number, in that one place,” he said.

With the reservoirs approaching their lowest levels in modern history, that brings us to our final number: 2026.

That year is the deadline for water users to negotiate a new set of managing guidelines for the Colorado River.

“The challenges are really hard,” Fleck said. “And it’s easy to put them off if you get a wet year. The dry years are what force the really important steps forward in the policy community.”

The negotiations promise to be a more intense process than the basin saw in the lead-up to the last set of guidelines in 2007, or the effort to bring together drought contingency plans in 2019. Federal and state officials have committed to a more inclusive process that integrates the needs of tribes, environmental and recreation groups, and Mexico.

Extremely dry years that produce eye-popping statistics tend to grab officials by the shoulders and give them a good shake. That’s important for the entire region, Fleck said, because the backdrop of an impending crisis will set the tone for those negotiations. For those talks to start in the middle of another record-breaking dry period should make it clear to everyone involved: the future of the Colorado River is all about learning to live with less.

This story is part of ongoing coverage of the Colorado River, produced by KUNC with financial support from the Walton Family Foundation. KUNC is solely responsible for its editorial coverage.