How Democrats lost their edge in the Salt Lake County election 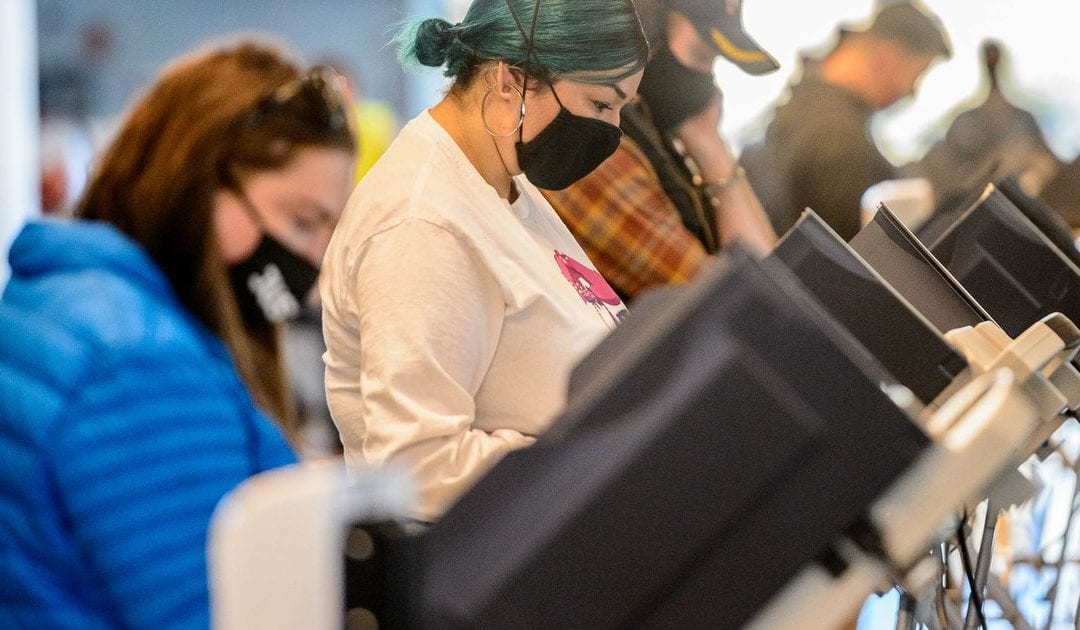 As millions of Americans anxiously watched vote tallies trickle in this election cycle, the down-ballot races in Salt Lake County presented their own cliffhangers.

On election night, things looked good for Democrats. Mayor Jenny Wilson had a strong lead over her Republican challenger. Democrat Jennifer Fresques also held a 4 point lead over Republican Chris Stavros for county assessor. County Council member Shireen Ghorbani, a first-term Democrat, was ahead of Republican challenger Laurie Stringham by six percentage points. Republicans Dave Alvord and Dea Theodore were ahead in races for the open District 2 and District 6 council seats, but there were still enough untallied votes for the Democrats to move ahead.

The Democratic candidates had, after all, clobbered their opponents in campaign fundraising.

But as the ballot counting went on, the Democrats’ leads tightened. The District 2 and District 6 candidates fell further behind. Stravos overtook Freques in the assessor’s race. Then, on the final day of counting, an upset — Stringham was suddenly more than 1,000 votes ahead of Ghorbani.

“So many friends and members of my family, community, Republican Party and team worked hard to make this grassroots effort possible,” Stringham said in a statement issued by the Republican Party. “We were outspent 6 to 1, but with everyone’s help, we made it over the finish line. I am so excited to serve Salt Lake County and will work hard to listen, learn, and represent everyone.”

Instead of securing a majority on the County Council for the first time in a decade as Democrats had hoped, Republicans have strengthened their position. The GOP now holds a 6-3 supermajority, enough to override a veto from Mayor Wilson.

“It is clear the people of Salt Lake County are eager to put a stop to consistent tax increases, and are ready to rein in a bloated and ever-increasing county government,” the Republican Party said in the statement.

Emily Hase, chair of the Salt Lake County Democratic Party, said her team was looking over the election data in order to ready themselves for 2022.

“We didn’t get the outcome we wanted in several of these down-ballot races, but we’re going to keep fighting,” Hase said. “Every experience we have running a campaign prepares us better for next time.”

Nearly 550,000 ballots were cast in the county, representing a 90% turnout of eligible voters. And it wasn’t just the county-level races where Republicans got a boost. Hopes to send Democrats to the Utah House in districts 39 and 45 were dashed (although they did manage to flip the District 38 seat) in a last-minute Republican wave. Although more Salt Lake residents supported Rep. Ben McAdams for reelection to Congress, it was the final count of outstanding ballots from the county that helped Republican Burgess Owens secure his win.

“Some people would call [Salt Lake County] blue and some would call it purple, but the elections results are clear that it’s looking a little more red than it has in recent election cycles,” said Damon Cann, a political science professor at Utah State University.

Meanwhile, Salt Lake County voters turned out to support President-elect Joe Biden over President Donald Trump by a whopping 11 points,contrary to the statewide result that put Trump on top by 20 points.

“A lot of times people try to read results as a mandate or the will of the people in an election,” Cann said. “When we’re looking at a divided government situation like this, Republicans can’t claim that the Trump agenda or Republican agenda has been vindicated as will of the people, nor can Democrats claim it has been repudiated.”

It’s tricky to take the temperature of voters this election because the county stopped doing exit polls after 2018, Cann said. That’s partly due to funding and partly due a logistics issue — it’s hard to take a representative poll of voters during a mail-in election.

One election outcome that has local politicos scratching their heads is the County Council race between Ghorbani and Stringham. Ghorbani was active and popular on social media. She showed up at events and had a visible presence in the county since her appointment to the post last year. As an at-large council member, she was working with the same pool of voters as the county mayor.

“One thing Mayor Wilson does particularly well, in my opinion, is in her public outreach and discussion, she seems to stay very focused on local issues,” Cann said. “That’s probably a wise strategy for someone in a constituency that can go in either direction.”

Wilson was, of course, vocal about national issues during her campaign for U.S. Senate in 2018. Since becoming county mayor she has occasionally taken public digs at President Trump and Gov. Gary Herbert on their pandemic response. But otherwise, Cann said the coverage he’s seen about the mayor shows “laser-focus” on county matters.

“The reason that’s helpful is if you start talking about national issues as a county-level leader, people start linking you to national disputes between the two parties,” Cann said. “You risk being linked to things that will be problematic for some of your constituency.”

Salt Lake County also had interesting election dynamics compared to the national trends. While early ballot counting for the presidential election showed Trump ahead, Biden emerged days later to overtake him with narrow victories in states like Georgia and Pennsylvania. But in Salt Lake County, except for the presidential race, it was the Republicans who came from behind to secure late victories.

“The conventional narrative is that Republican anxieties about voting by mail led Republicans to vote earlier”in other states, Cann said. “Then mailed absentee ballots broke heavily for Biden to the degree that by the time those votes were counted, it was enough to put Biden ahead.”

Utahns, however, have experience voting by mail, and it’s a system many prominent Republicans in the state have championed. GOP voters likely didn’t have the same anxieties.

A trend from 2016 may have repeated itself as well, Cann said. Utah Republicans may have felt ambivalent about both presidential candidates and waited until the last minute to cast ballots, causing their votes to be counted later.

“The number of people who did that is probably small, but in races that were as close as the 4th [Congressional] District or the at-large Salt Lake County Council, it only takes a small effect to change the outcome of a race,” Cann said.

Political scientists have a lot more speculating to do about the election. But one thing in Salt Lake County is clear, Cann said — it’s any candidate’s game.

Salt Lake County certified its elections results in a canvass Tuesday. Here are the final results in major and close races (remember these are only county totals and do not reflect results in statewide or multicounty races):

The statewide canvass will be held Nov. 23, certified by a three-person board made up of the state treasurer, auditor and attorney general.