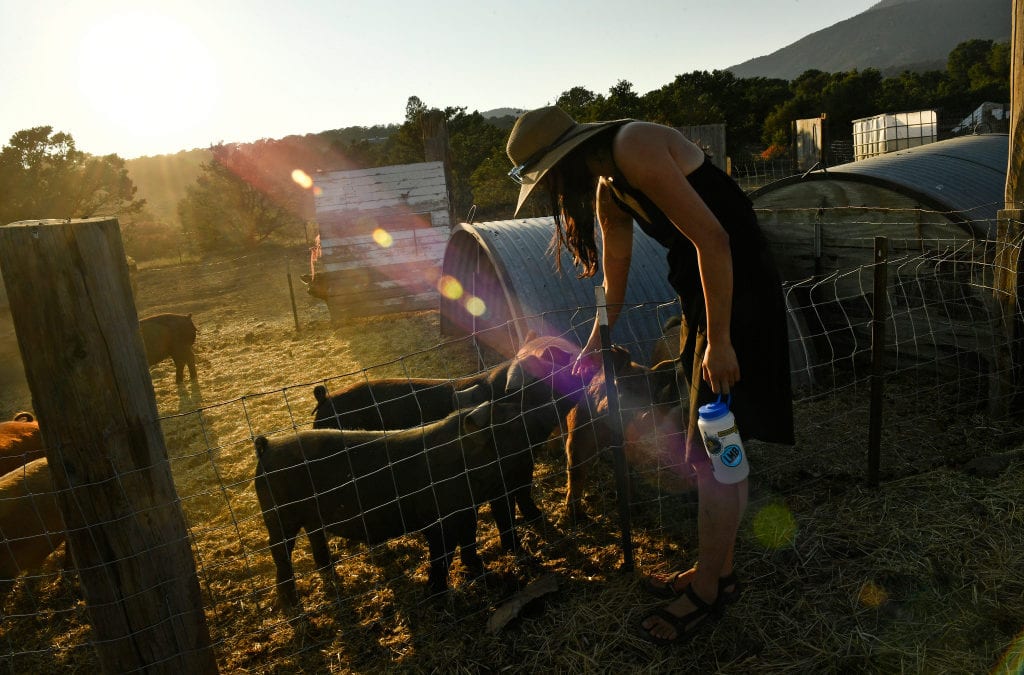 SOUTH FORK — Isaac and Wyatt Manobla were manning their booth at the town farmers market on July 10 when they decided to ask a customer if they would donate a dollar to Black Lives Matter.

It wasn’t even about the money. The brothers, who worked at nearby Sol Mountain Farm, mostly wanted to spark conversation on racial justice in this small, mostly conservative pass-through town on the cusp of the San Luis Valley.

But after the Manoblas had collected $3, an enraged customer told them she couldn’t believe they would be asking for donations to something like Black Lives Matter at a farmers market.

Soon after, the town administrator told the farm staff he had received formal complaints, and solicitation on town property would now be banned. And if Sol Mountain Farm chose to argue, they would be removed as organizers of the farmers market — an event they had started themselves six years ago.

The moment marked an inflection point for Sol Mountain Farm owner Wes O’Rourke and the rest of his staff: Should they acquiesce or continue to rock the boat in a place that O’Rourke described as “made by old white Texans, for old white Texans”?

The following Friday, Isaac Manobla and his fiancée Autumn Setzler stood behind the booth again, this time clad in Black Lives Matter T-shirts. The ACLU of Colorado has now taken up their case, citing constitutional violations by South Fork officials.

“We have to make the change and be the change ourselves,” said Angela Lee, the farm’s operations manager.

While big cities have dominated the headlines this summer with massive rallies, large-scale tumult and legislative reforms to address police brutality and racial injustice, small communities in Colorado’s mountains, valleys and plains also have been forced to confront the nationwide movement.

Over the past few months, social justice initiatives have taken shape in towns from South Fork to Crested Butte to Lyons — prompting public officials to resign over offensive social media posts, citizens to squabble over town paintings and even violent acts at protests.

The clash of national movements reaching smaller, more rural communities fits in with the idea of “reactance,” said Brett King, a social psychologist for the University of Colorado Boulder. That is, people can feel a sense of anxiety and push back when there’s a perceived threat to their sense of identifies and freedoms.

“Essentially, this (movement) can feel like values representing another larger entity that’s not connected to the community,” King said.

In Crested Butte, the uproar began with a painting.

As he anticipated a Sept. 8 Town Council meeting, Councilmember Will Dujardin wasn’t sure which way the council might vote on authorizing a giant Black Lives Matter street mural to go on Elk Avenue in the heart of a mountain town that’s almost exclusively white.

The idea came from a Black Lives Matter subcommittee formed in August by Dujardin and fellow Councilmember Mallika Magner in response to the national conversation on race prompted by the death of George Floyd in Minneapolis.

“Crested Butte, like much of the country, felt a moral reckoning was needed to think about what’s happening in our country in terms of pervasive racial injustice — even though we have a predominantly white community,” Magner said.

The council heard from several constituents — some of whom expressed their displeasure with spending tax dollars on what they argued was an overtly political and controversial topic.

The vote passed 7-0, and on Sept. 21, pictures of the phrase Black Lives Matter in giant yellow lettering appeared on the Travel Crested Butte Facebook page. The was soon flooded with hundreds of messages, and eventually the town had to remove the comments in a “desire to maintain a civil discourse,” Crested Butte officials wrote under the photo.

John Wirsing voiced his opposition to the painting during the council meeting, and said he was met with eye rolls and under-the-breath mutterings.

“If they’re going to paint something like that on the street, they need to also show support for police being attacked,” Wirling said in an interview.

Another rental property owner said he had two families cancel upcoming reservations and a third say they would never come back to Crested Butte because of the painting. Schmidt said he’s heard from a handful of second-home owners who vowed to sell their houses.

“If somebody doesn’t want to come here ’cause of that, that’s their choice,” the mayor said.

Controversies across the state

Beyond the confines of Crested Butte, Black Lives Matter and the broader social justice movement have created friction in other communities across the state.

In Gunnison, a corporal in the county sheriff’s office resigned in July after he appeared to threaten protesters in a Facebook post.

“Please, please protest in front of me especially when I am at work and (I’ll) show the world how that works out for you,” Cpl. Stephan Liest wrote in a comment.

A month earlier, the Lyons fire chief resigned after joking on Facebook that he would use fire hoses on protesters to “have some fun.”

The comments sparked a firestorm in the small Boulder County town, prompting one Black resident to declare Lyons “the most racist town I’ve ever lived in.” Another contingent in town, however, vehemently defended JJ Hoffman, the former fire chief, slapping “We love JJ” bumper stickers on their cars and posting signs of support near the fire station.

Mayor Nick Angelo has since promised to personally pay for an expert to facilitate a discussion on racial issues after the town’s Board of Trustees declined to pitch in.

“Lyons is a community that doesn’t have much diversity,” the mayor said. “So it’s extremely difficult to imagine what it would be like to be Black in America today.”

The tension in some towns has even spilled over into violence.

In June, an Alamosa lawyer allegedly shot a man at a downtown demonstration soon after Floyd’s death. The town’s mayor, Ty Coleman, insisted the incident was an aberration and not indicative of Alamosa’s otherwise peaceful protests this summer.

Trying to keep the peace

Nearly 200 miles away, in Cortez, Dawn Robertson has been trying to make sense of the vitriol she’s received after helping organize silent demonstrations in the conservative stronghold.

Robertson moved to the area in June from Boston during the heat of the national protests, and immediately threw herself into the efforts.

“I moved here to fight poverty and increase the general health of the community,” she said. “And this felt like it falls in line with my mission to help underserved people.”

The response from some community members, however, “has been horrific,” Robertson said. Counterprotesters have yelled “go home” and “you don’t belong in our community” along with a string of obscenities. Others have called Robertson at work, calling her a “pedophile terrorist,” she said.

Earlier this month, members of the Cortez City Council felt it necessary to issue a statement reaffirming the right of all citizens to assemble peacefully and exercise free speech in a civil manner after counterprotesters threatened Robertson’s group.

“I feel like the older I get, the more passionate I am about doing the right thing no matter the outcome,” Robertson said. “My intention is not to change anyone’s mind.”

Cortez Mayor Mike Lavey has been caught in the middle, trying to play peacemaker as the two groups continue to rally every Saturday. He speaks regularly with the organizers and has tried to walk a fine line of protecting free speech and preventing violence. But the tension continues to escalate, and as Saturday approaches each week, Lavey says he can feel his own stress levels rise.

“There’s nobody else doing it”

Lee, of Sol Mountain Farm, has also felt targeted as an outsider since moving to South Fork.

The daughter of Korean immigrants, Lee has heard the gamut of racial insults: “Go back to China!” or “You’re not welcome here!”

In June, she organized a protest in Del Norte, a slightly larger San Luis Valley town that sits between South Fork and Alamosa.

Around 30 people showed up — some high schoolers from Del Norte, along with a cadre of people from Saguache and Alamosa. The group got honks of support from passersby, but also trucks driving past blaring “God Bless America” and one man yelling “white power.” One person shot a bottle rocket at them as they marched.

Despite some opposition, the Sol Mountain Farm crew continued to organize rallies, week after week.

“It was really cathartic,” Lee said. “I was crying a bunch — a lot of folks were shedding tears during the moments of silence, but I thought it was really powerful. I don’t think the town of Del Norte had ever seen anything like that.”

Amy Brown, a Denver-based organizer with Black Lives Matter 5280, said it’s encouraging to see the movement grow in places that might not normally be hotbeds for racial justice organizing — or even have large Black populations.

Organizers, Brown stressed, should still be taking direction from Black people in the movement. That could mean using resources published by Black activists or thought leaders to make sure Black lives are being centered.

“If that is not happening, then I think oftentimes you’re going to miss the mark in what it would actually look like to center Black lives and to work toward systematic changes that would impact people’s lives,” Brown said.

The staff at Sol Mountain Farm feel a need to speak out, to organize, to fight back, but they worry about what it might do for their business.

After Isaac Manobla and his fiancée wore their Black Lives Matter shirts to the farmers market a week after being told to stop asking for donations, O’Rourke said he was concerned about the situation escalating.

“I just didn’t know if everyone was going to boycott us,” he said.

Dan Hicks, South Fork’s town administrator, said he reached out to Sol Mountain Farm after receiving complaints about the solicitation from people who “felt it was too inappropriate at a farmers market to push for donations for this cause.”

The Black Lives Matter subject is controversial with some people, Hicks said.

“I don’t think the town had a position on the movement,” he told The Denver Post. “We were just trying to limit controversy on town property.”

As O’Rourke and the rest of Sol Mountain Farm debated whether to continue fighting with the town and elevating the issue, the group spoke with a local business owner, who told them, “This is why I don’t mix my politics with my business.”

So why did these farm workers risk their business and future?

“There’s nobody else doing it,” Lee said.