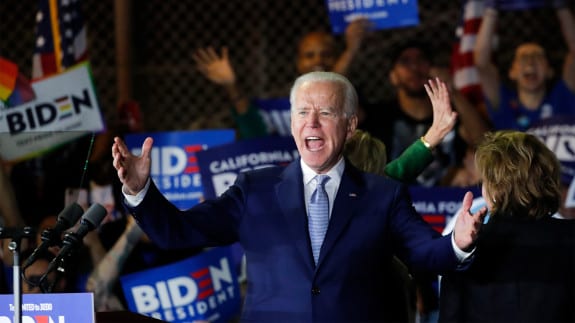 Super Tuesday was very good to Joe Biden. Roughly one-third of Democrats nationwide cast their ballots for president in the first big primary election of the year, although not all of those ballots have yet been counted. Accordingly, we won’t be unfreezing our primary forecast until we have a clearer picture of the exact results. But we can confidently say that, whenever it bleeps and bloops back to life, the forecast will show Biden on the rise. Not only did he win the states he was expected to win on Tuesday, but he proved his cross-sectional appeal by notching a few wins on what was supposed to be Sen. Bernie Sanders’s turf.

Heading into yesterday, it looked like Super Tuesday was going to break down along regional lines, with Biden winning the Southern states and Sanders winning those in the North and West. Biden certainly held up his end of the bargain: Our model gave Biden a 2 in 3 chance or better of winning the six Southern states of Alabama, Arkansas, North Carolina, Oklahoma, Tennessee and Virginia — and he carried all six by double digits. In fact, he exceeded our already-lofty expectations in these states. For example, our average forecast in Virginia put Biden at 43 percent of the vote and Sanders at 23 percent; Biden got 53 percent in real life and Sanders 23 percent. And in Alabama, we forecasted that Biden would beat Sanders 44 percent to 21 percent, on average; the final results were Biden 63 percent, Sanders 17 percent.

Crucially, Biden also won Texas in a close race; ABC News finally called the state at 2 a.m. Eastern as Biden held a 33-percent-to-29-percent lead over Sanders. Texas was the most up-in-the-air state in our forecast, so it was always going to be a bellwether for who was having a good night on Tuesday. Of course, the fact that it is worth the second-most delegates of any state doesn’t hurt either.

But Biden’s most impressive wins came in Massachusetts and Minnesota, where Sanders entered Super Tuesday as a slight favorite — and Biden wasn’t even the most likely candidate to upset him. Per our forecast, Biden had only a 1 in 5 chance of carrying each state, and yet he won Massachusetts by 7 points and Minnesota by a daunting 9. Both wins showed Biden’s ability to expand his coalition outside his usual comfort zone. Minnesota is a state that has relatively few voters of color (a key part of Biden’s base) and that Sanders won by 23 points in 2016. But the last-minute endorsement of Minnesota Sen. Amy Klobuchar, who dropped out of the race to support Biden, was apparently very influential. And in Massachusetts, Biden effectively kneecapped home-state Sen. Elizabeth Warren by usurping her former base of college-educated whites; Biden carried the upper-class suburbs that ring Boston.

So far, the only states that Sanders is projected or likely to win are three Western states — California, Colorado and Utah — plus Vermont. Sanders was never in danger of losing his home state (he had a greater than 99 percent chance to win Vermont, according to our forecast), and he may have been saved in the West by the fact that all three states vote primarily by mail (and therefore cast many of their ballots before this week, when Biden experienced a surge of endorsements and popular support). According to exit polls, voters who made up their mind on whom to vote for within the last few days broke heavily for Biden. And even in states like North Carolina, Biden did merely OK among early voters but cleaned up among Election Day voters.

Finally, there are a couple states where we still don’t have conclusive results. As of Wednesday morning, Maine was still too close to call, although that in and of itself is a win for Biden; we gave him only a 1 in 4 chance of carrying the state entering the night. And although some outlets (though not our colleagues at ABC News) have called California for Sanders, the results there are still very preliminary, since mail-in ballots can arrive as late as Friday and still be counted. Given that California is worth 415 pledged delegates, the exact, final results there could make a big difference to each candidate’s delegate math. Indeed, with plenty of votes still to be counted in Colorado, Maine and Utah as well, the final national delegate totals probably won’t be clear for several days.