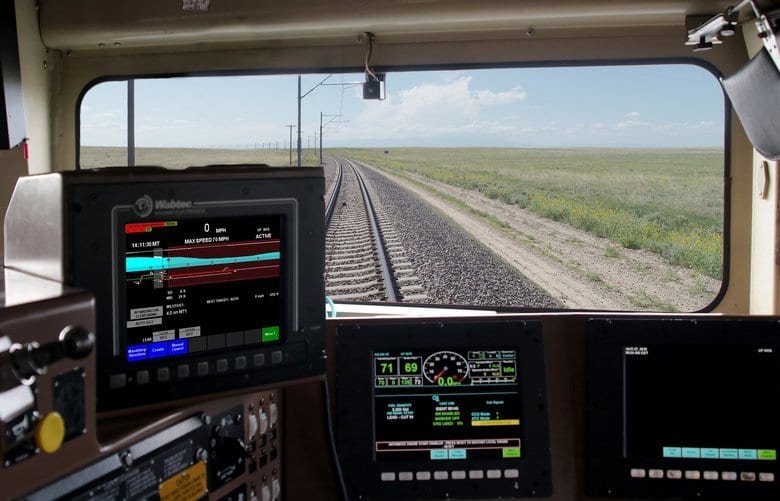 Last summer, a 30-car freight train led by three diesel locomotives rumbled down the tracks for 48 miles through the Colorado desert — with nobody at the controls.

But this was no runaway train. In fact, the experiment could be a preview of the rail industry’s future.

The demonstration at the Transportation Technology Center — a research and testing facility owned by the Association of American Railroads — was the debut of driverless train software produced by one of the oldest companies in the industry. Along for the ride were representatives from some of America’s largest freight railroads who in recent years have been intrigued by the many ways artificial intelligence (AI) could be applied to one of the nation’s oldest industries.

As machine learning continues to infiltrate American industry, railroads are looking at it as a tool to improve safety and efficiency, while simultaneously competing for business with a trucking industry positioning to embrace autonomous vehicles.

The A.I. Age | This 12-month series of stories explores the social and economic questions arising from the fast-spreading uses of artificial intelligence. The series is funded with the help of the Harvard-MIT Ethics and Governance of AI Initiative. Seattle Times editors and reporters operate independently of our funders and maintain editorial control over the coverage.

Meanwhile, federal regulators are clearing the way and experts say technology like Positive Train Control — the anti-collision technology that investigators say could have prevented the fatal 2017 Amtrak wreck in DuPont, Pierce County — have set the groundwork for such operations. But some, including labor leaders, say driverless trains are unsafe and would never be accepted by the public.

“I’m really not sure if people will be comfortable with a 10,000-foot train coming through their town with no one on it,” rail consultant Larry Gross said.

While some light-rail systems run without onboard operators, including transit lines in Vancouver, B.C., there is currently only one place on earth where long, heavy-freight trains run without an engineer on board: Australia.

In 2018, mining giant Rio Tinto began running driverless trains to move iron ore hundreds of miles on its remote rail system. The company spent more than $940 million to get the system, called AutoHaul, up and running. It was developed with a number of Australian, Japanese and U.S. companies, including New York Air Brake, a manufacturer of train brake systems founded in 1890 and the same company that conducted the autonomous train test in Colorado last year.

The AutoHaul system processes data about the location, length and weight of the train to determine the ideal throttle position to safely move it down the line. The technology is similar to another product from New York Air Brake called LEADER that helps railroads conserve fuel.

Muru Murugappan, BNSF Railway chief information officer and vice president of technology services, said there are many other ways machine learning can be used other than for driverless trains.

BNSF’s rail system stretches more than 32,000 miles across 28 states, including 1,335 miles of track in Washington state where it employs more than 4,000 people.

In the past few years, the Texas-based railroad company has used AI to improve how it maintains its track and freight cars. It uses machine vision to capture and analyze 750,000 images every day to detect broken wheels that can lead to derailments. One of the broken-wheel detection systems was deployed in Spokane and another will be built along its main line near North Seattle this year.

Murugappan says the technology is so good that it can find defective wheels that were hard to spot with the human eye. BNSF is also developing a new track-inspection system that could gather high-resolution images of the right of way while traveling up to 70 mph that can be analyzed by a program to detect deformities.

The agency is preparing for driverless trains and since 2015 has been co-funding research on autonomous train operations with the Association of American Railroads. In the past two years, the FRA has even been working to establish technical specifications and performance standards required for autonomous operations.

Currently no federal rules prohibit driverless trains in the U.S. In 2019, the FRA withdrew a proposed rule that would have required two people on all freight trains because it would “stifle innovation,” according to an agency spokesperson.

David Clarke, a professor at the University of Tennessee and director of the school’s Center for Transportation Research, said one of the biggest challenges to a driverless freight train is the environment they operate through. While transit lines like Vancouver’s SkyTrain operate on systems that are generally closed off from the public, freight trains operate on a much more open network through towns and cities.

But Clarke says the building blocks for autonomous or remote train operations (where the engineer is running the train from hundreds of miles away) are already in place, including Positive Train Control. Federal law requires that major rail lines have Positive Train Control — a system designed to prevent train-to-train collisions and speed-related derailments — installed by Dec. 31.

Freight railroads have spent billions of dollars implementing Positive Train Control and may now want to get a return on that investment, Clarke said. One way to do that would be to reduce the number of people working on the train. Clarke said that it could be particularly attractive to the railroad industry if driverless trucks become the new standard.

“If the trucking industry drives its costs down by adopting autonomous technology, railroads might feel compelled to do the same,” Clarke said.

Gross, the rail consultant, said that while automation will have a big impact on railroading, he’s not positive it will be with driverless trains. He said the trucking industry has more to gain from autonomous vehicles because of simple math: A freight train can move hundreds of loads of freight with just two people whereas it would take hundreds of people to do the same with trucks.

But labor groups, including SMART Transportation Division, one of the largest railroad unions in the country, say driverless trains could never be safely operated in the U.S. Gregory K. Hynes, national legislative director for SMART, said systems like Positive Train Control are imperfect and that the autonomous rail line in Australia is remote. He also argued that having someone on a train is important when things go wrong, like when a train strikes a vehicle or pedestrian.

“The people on the train are always the first responders at a grade-crossing accident,” he said.

SMART and other unions have advocated for laws in multiple states to require two crew members aboard all freight trains, including in Washington, where the state Senate passed a crew-size bill on March 6. Even if the bill were to be signed into law, it’s unclear what impact it would have because the FRA has stated that federal regulations preempt any state crew-size law.

Officials from BNSF and Union Pacific, the two largest freight railroads in the Pacific Northwest, declined to comment about their interest in driverless trains. Michael Rush, senior vice president for safety and operations at the Association of American Railroads, said the industry is embracing technology like artificial intelligence but that “we are not currently at a point where the railroads are able to operate without any in-cab crew members.”

Deepak Kumar, the director of marketing for New York Air Brake, said the test in Colorado proved that will soon change. He said that within the next few years the company could put the technology on the market.

“I’m positive that this will happen,” Kumar said.