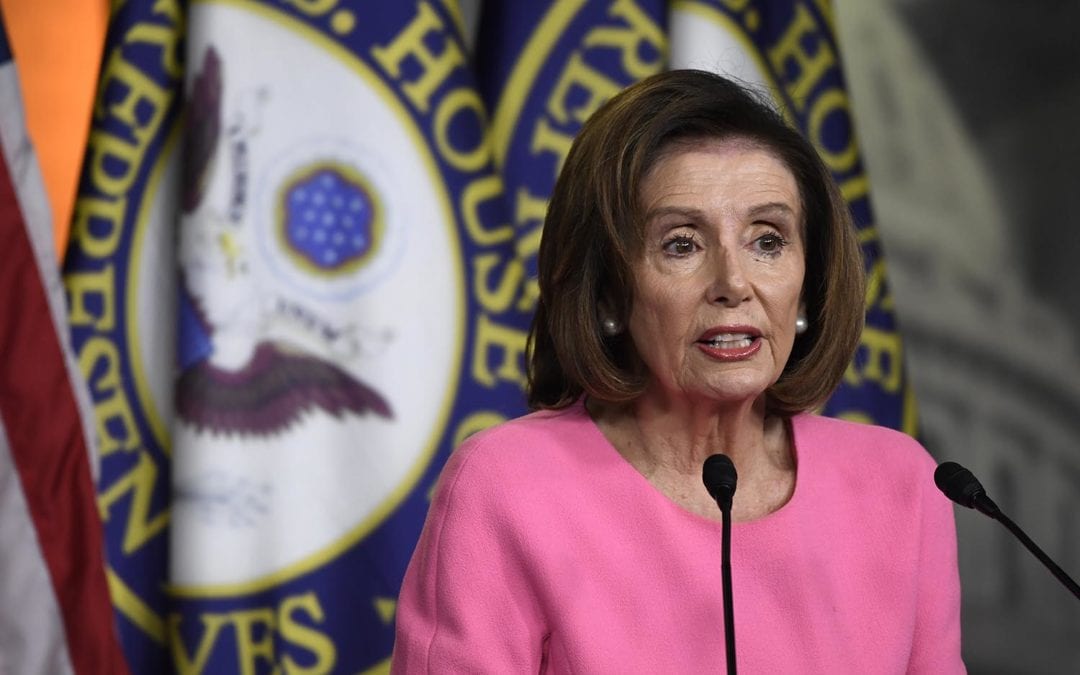 Several conservative hard-liners rushed to defend Massie, with Rep. Chip Roy (R-Texas) telling Trump to “back off.” And the House Freedom Caucus put out a statement opposing the massive rescue package, a further sign of GOP agitation.

The bill aims to prop up virtually every sector of the U.S. economy in response to a pandemic that has shuttered businesses, fueled massive layoffs and disrupted nearly every aspect of American life.

The measure provides a significant — albeit temporary — expansion of unemployment benefits, a one-time cash infusion for most Americans and emergency federal funding for food aid, hospitals and schools and universities. The package also provides a $500 billion lifeline to major industries including airlines, $350 billion for small business loans and $150 billion for state and local governments.

“This is about all of us as Americans, not as Republicans or Democrats,” House Majority Leader Steny Hoyer (D-Md.) said in floor remarks Friday.

Emotions ran high as lawmakers took to the floor. Rep. Haley Stevens (D-Mich.) — who made the nearly nine-hour drive to D.C. overnight — refused to stop speaking after she went over her time limit, shouting into the chamber even as Hoyer tried to allow her to extend her remarks.

“I rise for every American who is scared right now,” Stevens said, raising her voice as she attempted to be heard above the banging gavel.

Ahead of the vote Friday, dozens of lawmakers made a mad dash to Washington, driving overnight from states like Massachusetts, Indiana and Rhode Island and boarding red-eye flights from California and Arizona.

Members initially thought they would have until Saturday to arrange travel back to D.C. if a Republican did, indeed, demand a tally of the vote. But that plan was scrambled Thursday afternoon, when Pelosi announced to members on a caucus call that she planned to pass the bill Friday.

Lawmakers of both parties fumed at Massie as they sought last-minute flights, grudgingly making plans to return to the Capitol even as they feared it could increase the risk of spreading the coronavirus among their own ranks.

“Because of one Member of Congress refusing to allow emergency action entire Congress must be called back to vote in House. Risk of infection and risk of legislation being delayed,” King complained on Twitter.

Officially, more than 80,000 Americans have been diagnosed with coronavirus, including Reps. Ben McAdams (D-Utah) and Mario Diaz-Balart (R-Fla.) and Sen. Rand Paul (R-Ky.). But health officials expect the actual number of cases to be far higher and rising.

Even before voting on the latest relief package, top Democrats were already talking about the need for a fourth bill to help rescue the economy. Just Thursday, the Labor Department released record-high unemployment numbers, with jobless claims surging to 3.3 million last week.

But some Republicans, including House Minority Leader Kevin McCarthy (R-Calif.) have tried to downplay the prospect, saying they don’t know if there will be a need for a “Phase 4” bill.

Pelosi seemed undeterred, telling reporters at her weekly press conference Thursday that she planned to forge ahead with the legislation, working mostly from Washington, and hoped the other congressional leaders — McCarthy, Senate Majority Leader Mitch McConnell (D-Ky.) and Senate Minority Leader Chuck Schumer (D-N.Y.) — can work with her on a deal.

After passing the relief package late Wednesday, the Senate adjourned until April 20. The House is also expected to be out for several weeks, if not longer.

In the days leading up to the vote, both Pelosi and McCarthy had strongly urged members in conference calls and in individual conversations not to object to the voice vote, which they said would still allow for a debate and a chance to vote in opposition without forcing hundreds of people on planes.

House Republican leadership spent hours on Thursday attempting to mollify concerns within their conference, convincing members like Colorado Rep. Ken Buck to oppose the bill on the floor but not force a vote. But Massie remained elusive, refusing to tell GOP leaders what he planned to do.

Worried about Massie or another lawmaker trying to force a roll call vote, House leaders had prepared contingency plans. Both parties’ whip operations kept a careful count of who was able to return, and whether they could reach a quorum on the floor.

Over the last week, several Democrats had urged their leadership to allow for remote voting. Pelosi has been firmly opposed to the idea, however, and has said that lawmakers who are able — after consulting with their own families and doctor — should return to the Capitol to vote.

The voting process will look vastly different than the House’s normal procedure. Members will vote in groups of no more than 30 members at a time in an attempt to limit exposure to other members.

Lawmakers were required to use hand sanitizer before and after leaving the chamber Friday. And only members who were scheduled to speak were allowed to sit in the chamber. Even on their way to votes, lawmakers were asked to ride with no more than one other person in an elevator.

And the Sergeant-at-Arms and the Capitol physician announced strict rules to keep members at least six feet apart at all times. But as floor debate began Friday, it was clear not all members were following the rules.

Melanie Zanona contributed to this report.