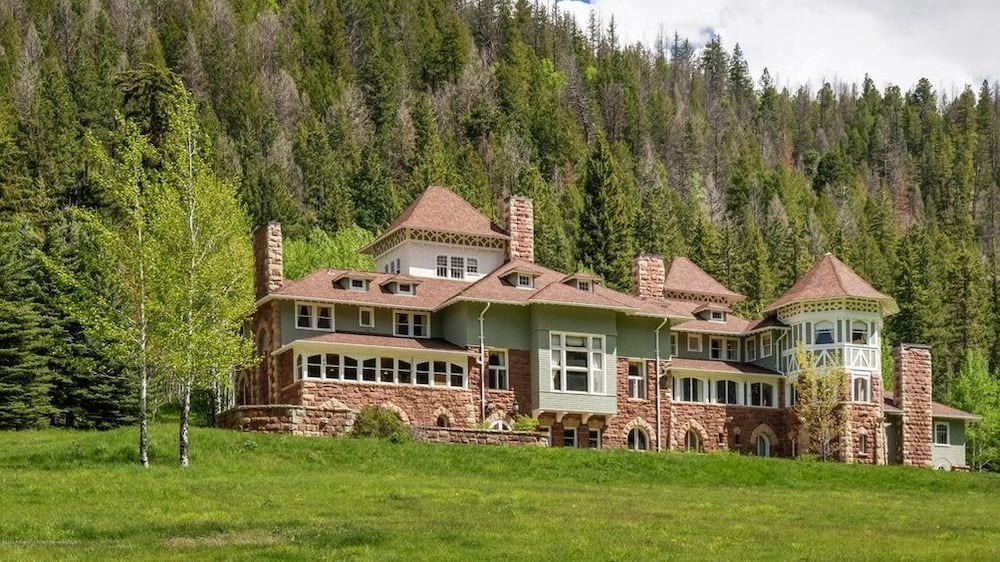 A castle built for the man who founded the town of Redstone, CO, can now be yours, for $19.75 million.

Known as Redstone Castle and as the “Ruby of the Rockies,” the 42-room castle has almost 30,000 square feet of interior space. It also has over 150 acres of land, surrounded by beautiful scenery along the Crystal River.

“The castle sits between two national forests in two wilderness areas,” says the listing agent, Jeff Bier. “It sits up on the hill overlooking the river in the valley. It’s a very commanding presence.”

A coal magnate, John Cleveland Osgood, built the castle for his wife near the town of Redstone, which was founded as a company town for people working in the coal mining industry. Construction began in 1897 and was completed in 1902.

“You feel the opulence. And to use an overused phrase, you go back in time,” Bier says. “Everything is just over the top, and you can see how it was in that era. It has all been brought back and is probably in better shape than maybe it was when it was built. It’s just stunning when you walk in.”

The house has 15 bedrooms, 15 full bathrooms, and five half-bathrooms. All the bathrooms have been updated. The bedrooms are quaint and colorful, and some feature fireplaces.

One very large and updated kitchen serves the whole castle. Many of the marble finishes were sourced from nearby Marble, CO.

The dining room is huge and regal, and the living areas are intimate and comfortable, thanks to fireplaces, leather-embossed walls, and elaborate ceilings. Several Tiffany lamps in the great room were specifically designed for the castle.

The stone fireplace in the reception room is adorned with the Osgood coat of arms—a lion holding a sheath of wheat.

The current owners completely restored the castle from top to bottom and updated the estate’s infrastructure, including the electrical, plumbing, and heating.

“They’ve uncovered architectural features that had been covered up. They’ve redone everything,” Bier explains.

“Some of the rooms had fallen into disrepair from previous owners who really didn’t pay much attention to it, and [the current owners] just went through it all. And it just shines right now.”

The owners own other large historic properties, like the Hotel Denver in Glenwood Springs, CO, and are ready to move on to another project, Bier explains.

Everything you see in the listing photos is included with the sale.

“The owners actually tracked down some of the previous furnishings and managed to get them back at the castle,” Bier says. “Every room you see, everything will stay intact.”

Permits are also part of the sale. New owners could add an additional 20,000 square feet of cottages, cabins, or other structures on the property, Bier explains. He also notes that gathering and event permits will be included with a sale.

Bier’s daughter got married on the property, and he served as a caretaker at the mansion in the 1960s, while he was in college.

An antique ski lift on the property is not operational, but serves as a throwback to the 1950s, when a corporation planned to build a golf course and ski area on the land.

“They proceeded and had a small T-bar lift which is on the castle property, and they cut some trails back in the mountains behind, but it never came to fruition,” Bier explains.

The corporation owner died, and the project was never finished.

“The ski lift is actually kind of an antique,” Bier explains. “It’s an old T-bar lift from that era.”

There are no slopes on this property, but plenty of skiing is within reach, in nearby Aspen, CO, and Glenwood.

There’s also a carriage house on the property.

“It’s just under 6,000 square feet, and it has a great suite on the upper floor,” Bier says, adding that the current owners stay there when they are in town. “There’s a big room downstairs with lots of character and some of the original carriages.”

The home is listed on the National Register of Historic Places and offers plenty of outdoor space, set off by the natural splendors of the Rockies and the Crystal River.

“It’s one of the last untamed rivers in the state of Colorado, and it lives up to its name. It’s just crystal clear and beautiful,” Bier says.