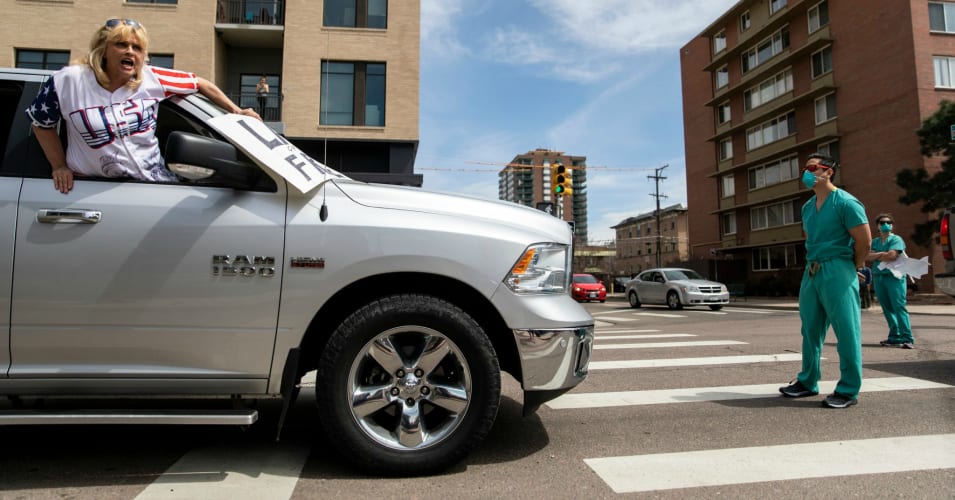 A small group of frontline healthcare workers dressed in scrubs stood in the middle of a busy street in Denver, Colorado on Sunday to block hundreds of right-wing protestors traveling to a demonstration against Gov. Jared Polis’ stay-at-home order, which is aimed at slowing the spread of the deadly coronavirus.

Photojournalist Alyson McClaran captured the tense confrontation in a series of photos posted to social media on Sunday. Video clips also emerged on Twitter showing right-wing demonstrators screaming and honking at the nurses as they calmly stood their ground in the street.

“They were blocking the roads until the police force stepped in,” McClaran told the New York Times. “People were putting their cars right up against them.”

The healthcare workers—who have months of firsthand experience with the effects of Covid-19—told Chase Woodruff of Denver Westword that the protestors defying the stay-at-home guidance were “very aggressive.”

“I’ve been standing here for a few minutes and already seen two people get in their faces,” Woodruff tweeted.

Observers applauded the nurses as “heroes” for taking a stand against the dangerous demonstration while also voicing dismay that they were forced to do so by reckless protesters, who have been egged on by the president of the United States and Republican lawmakers.

“Just about all of us at some point or another will need a nurse to help us,” tweeted Virginia House of Delegates Member Danica Roem. “I have more times than I can remember. When they’re telling us not to contribute to what they’re seeing in the hospital every day, listen. They just might have a better idea of what we’re up against.”

Health care workers stand in the street in counter-protest to hundreds of people who gathered at the State Capitol to demand the stay-at-home order be lifted in Denver, Colo., on Sunday, April 19, 2020. Photos by Alyson McClaran pic.twitter.com/yanunDrVKj

Remarkable scene at 12th and Grant, where two healthcare workers from a Denver-area hospital — they declined to say which or give their names — are standing in the crosswalk during red lights as a “reminder,” they say, of why shutdown measures are in place. pic.twitter.com/7xTjXvGN2E

Progressive independent media doesn’t exist without support from its readers.

There’s no way around it. No ads. No billionaires. Just the people who believe in this mission and our work.

If you believe the survival of independent media is vital to do the kind of watchdog journalism that a healthy democracy requires, please support non-profit Common Dreams today:

According to Denverite, hundreds of people gathered outside the Colorado state capitol building on Sunday in defiance of social distancing guidelines implemented to prevent the spread of Covid-19, which has taken more than 400 lives in Colorado. The governor’s stay-at-home order is set to remain in effect until at least April 26.

“Protesters huddled together on the sidewalk and up the lawn toward the Capitol, waving flags and bearing signs with slogans like ‘Everything we do is essential’ and ‘Unemployment takes lives, too,'” the outlet reported. “In addition to those demonstrating out in the open, cars drove by honking, some trailing American flags, adding to the number of protesters, although at a distance. Other signs included ‘Your health does not supercede my right’ and ‘I would rather risk coronavirus than socialism.'”

During a press briefing Sunday evening, President Donald Trump praised the right-wing demonstrators who have taken to the streets in Colorado, Michigan, and other states over the past week. The protests in Michigan last week were organized by a group with ties to Betsy DeVos, Trump’s billionaire education secretary.

“These are great people,” said Trump, who encouraged the demonstrations in a series of tweets on Friday.

“I’ve seen the interviews of people. These are great people” — asked if he’s concerned that he’s inciting violence with his tweets in support of anti-stay-at-home protesters, Trump defends the protesters and says he’s not worried about it pic.twitter.com/roLTWAL2Ik