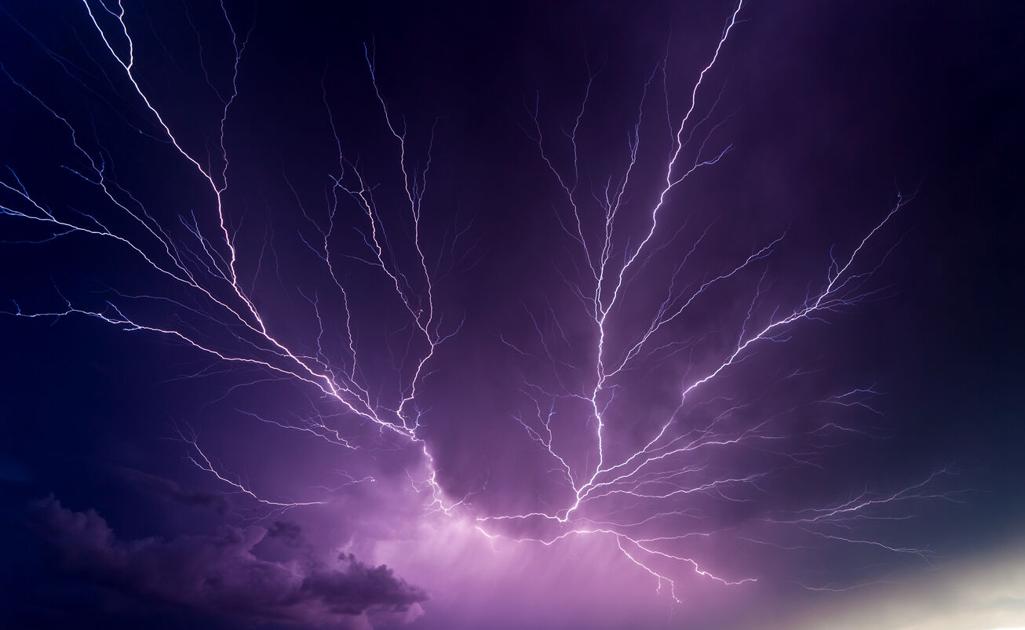 Colorado gets zapped by 500,000 lightning strikes every year – just one more aspect of the state’s wild weather.

While most lightning strikes aren’t noteworthy, Colorado has seen 584 lighting casualties (fatalities and injuries) during the 39-year period from 1980 to 2019, with 99 deaths and 485 injuries. That’s about 2 to 3 fatalities and 12 injuries per year in the state.

The chart above shows the lightning casualties (injuries and fatalities) by gender since 1980.Chart Credit: The National Weather Service.

Where lightning strikes the most

Where is lightning most frequent in Colorado? Without a doubt, near the Palmer Divide & adjacent foothills. Lightning is generally less frequent across valleys/parks although the frequency increases near the KS/NE borders due to better moisture. #SevereWeatherAwarenessWeek #COwx pic.twitter.com/WXDzezGgQM

Trail Ridge Road is another hot spot for strikes, as are many high-elevation areas around Colorado.

When lightning strikes the most

Data from 1980 to 2019 shows that July is the most dangerous month in Colorado for lightning strikes followed by June and August.

The chart above shows the time when lightning casualties occurred in the state of Colorado. Data since 1980. Chart Credit: NWS.

The chart above shows the lightning injuries and fatalities by month since 1980. Chart Credit: NWS.

The National Weather Service says most fatalities occur between June and August, often on the weekends when more people are out and about and in the afternoon.

On average, lightning kills 2-3 people and injures about 12 people every year in Colorado. Most fatalities occur from June through August, on the weekends, and in the afternoon. Keep that in mind when planning to spend time outdoors this summer! #SevereWeatherAwarenessWeek #COwx pic.twitter.com/nx25BBFn7H

The highest risk of lightning strikes tends to be in elevated areas, often near a summit or ridgeline. To reduce your risk of being struck by lightning, plan to start your hikes early in the morning to avoid afternoon thunderstorms. Always monitor the weather forecast and be prepared to turn around if the weather turns.

It’s also worth noting that Coors Field was recently ranked among the most lightning-prone stadiums in Major League Baseball. According to a recent study by Vaisala Meteorologist Chris Vagask, 49 games were threatened by lightning strike at Coor Fields over a period of four years.

Colorado ranks 19th in the country when it comes to cloud-to-ground strikes over the past 10 years. The lightning flash density is much lower, ranking at 31st. Nationally, Colorado ranks 4th in lightning fatalities between 1959 and 2017.

According to the NWS, lightning strikes the U.S. about 25 million times each year.

#SevereWeatherAwarenessWeek continues with lightning safety today. Simply put, when thunder roars, go indoors! Do not seek shelter under picnic shelters, sports dugouts, porches, trees, carports or tents. These types of structures are not safe when lightning is occurring. #COwx pic.twitter.com/n7g1w2POlr

Editor’s Note: If you hear thunder or see lightning, immediately seek shelter. Do not seek shelter under picnic shelters, sports dugouts, porches, trees, carports, rocks, or tents. Remain in a safe location or indoors until 30 minutes after you hear the last clap of thunder. For more lightning information and safety tips while hiking, click here.