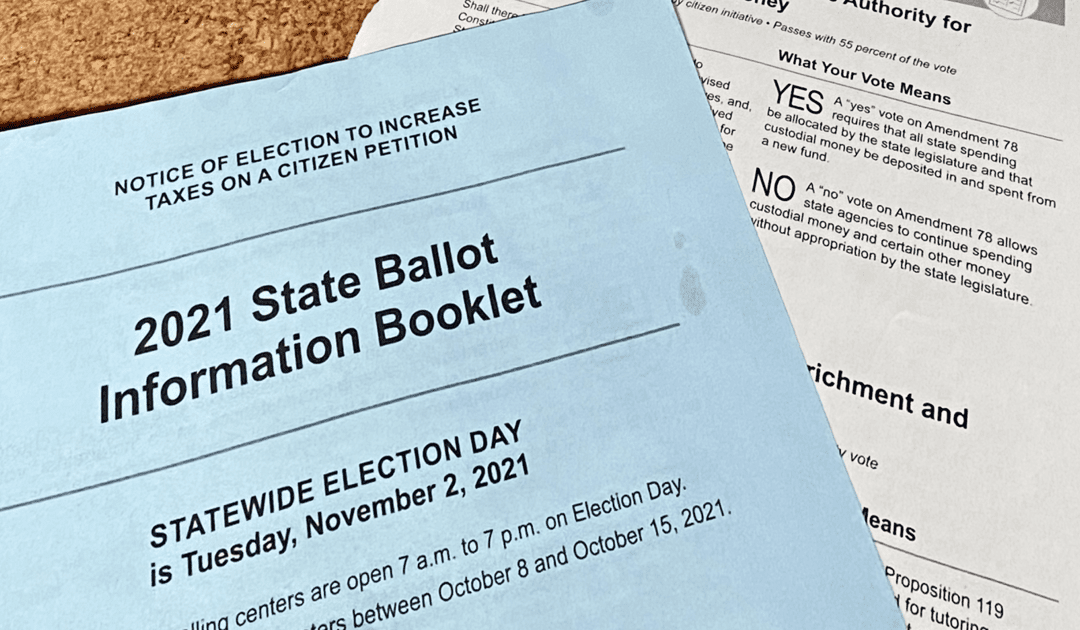 You won’t find any candidates for governor, U.S. Senate or the General Assembly on this November’s ballot, but Colorado voters will have a list of financial decisions to make, some towns much more than others.

Off-year elections in Colorado are preserved primarily for how voters want their tax dollars spent on top of other hefty policy decisions. Ballots for the Nov. 2 election were mailed out beginning Oct. 8, and local clerks will have until Nov. 12 to finish tabulations, once military and other other ballots are in the mix.

This is what voters across Colorado will find on their ballot, in addition to local measures:

The program would fall under a new state agency, the Colorado Learning Authority, which would be outside the oversight of the state Board of Education and the Department of Education. Instead, LEAP would be governed by a nine-member board appointed by the governor.

Here’s the kicker: recreational marijuana users will foot the bill.

If projections are accurate, the program’s scope far exceeds its revenue. The Legislative Council’s Blue Book, a nonpartisan analysis, sets the price tag at at least $109.1 million by fiscal year 2022-23.

That shortfall and how the measure would cover it caused a rift between the primary backer, Gary Community Ventures, run by former state Sen. Michael Johnston, and the education community. Gary and the state’s largest teachers’ union, the Colorado Education Association, were part of the coalition in 2020 to pass Proposition EE, which set up state government’s Early Childhood Department and paid for it with tax increases on tobacco products.

The allies are divided on Prop 119. The CEA is officially neutral, although it originally supported the measure, according to Taxpayers for Public Education.

That’s because the shortfall is covered by a required $20 million annual boost from the general fund, through diverting that money from the state land trust, which funds public schools by leasing out public land for money-making uses, such as agriculture, recreation and mining. That’s led to opponents calling the program, which is open to students at public and private schools, a voucher in disguise.

Indeed, the ballot measure allows parents to choose who would provides those out-of-school services, and doesn’t limit the providers to just those in public education.

Providers, however, would be governed by the nine-member board, which is required to develop criteria for the selection and certification of learning opportunity providers.

School districts and other “local education agencies” would be pre-certified, as would teachers. The state’s Blue Book says “other interested providers must submit an application and be certified by the authority as an approved provider. A list of authority-approved local and statewide providers will be made available to program participants.”

Because it doesn’t amend the state constitution, the question needs only a simple majority to pass.

Voters could direct the General Assembly to manage all “custodial” dollars, prohibiting state agencies from spending money received for a particular purpose without a direct allocation from the legislature. It requires those dollars be deposited into a new fund, which would earn interest for the state’s general fund.

The proposal also requires the legislature to hold a public hearing each year to allocate any spending from the new fund.

The General Assembly already has the authority to spend revenue received from taxes, cash funds and federal dollars. Those decisions are primarily the job of the Joint Budget Committee, which crafts the state spending plan every year, with the approval of the General Assembly and the governor.

What’s at stake here are “custodial” dollars. As described in the Blue Book, that’s money received from the federal government, legal settlements or donations from individuals or organizations.

This ballot measure would amend the state constitution, so it requires 55% approval from voters.

During 2020 and 2021, the state received $1.67 billion from the federal government through several congressional acts, including the Coronavirus Aid, Relief and Economic Security (CARES) Act. But the General Assembly didn’t dictate how that money was used, largely because it showed up when the legislature wasn’t in session.

Instead, Gov. Jared Polis spent that money, and that raised the ire of Republicans and even a few Democrats at the state Capitol.

Amendment 78 would add another layer of spending authority for gifts, grants and donations, which are primarily sent to state colleges and universities. Additionally, the Colorado Transportation Commission, appointed by the governor, currently dictates how federal road, bridge and transit dollars are spent, but under Amendment 78, the General Assembly would appropriate those dollars.

The measure is backed by Colorado Rising Action, which put the 2020 measure Proposition 117 on the ballot to require voter approval for new state enterprises, paid for by any fees generated above $100 million in the first five years. That led to the General Assembly’s Democrats coming up with four enterprises for transportation funding in the 2021 session, each below the bar for voter approval.

Unite for Colorado says a vote for Amendment 78 “would ensure that all state money is allocated by the legislature. Instead of allowing the Governor or Attorney General to spend millions (or even billions) of dollars on their own, Amendment 78 would help provide necessary oversight. It’s time to end political slush funds operating outside of public view.”

Those against it include Summit County Commissioner Tamara Pogue, who is among the plaintiffs in a lawsuit filed against the state seeking to nullify the election results on Amendment 78.

Pogue told Colorado Politics the results should be thrown out, in part because the measure has no connection to the state constitution’s Taxpayer’s Bill of Rights, a requirement for an odd-numbered year election.

Pogue opposes the amendment because in an emergency — such as a recent wildfire in Summit County that threatened 500 to 600 homes — there would have been federal funds available if any homes were lost. Those funds would also have helped the community with recovery efforts, she said.

If Amendment 78 passes, all of those funds would have to go through the legislature, which Pogue said would slow the process down and fall prey to partisan haggling “that’s not in the best interest of communities like mine.”

However, during its last session, the General Assembly passed Senate Bill 293, which changed the classifications for non-residential properties, and scaled it back to apartments and lodging.

The measure needs a simple majority to pass.