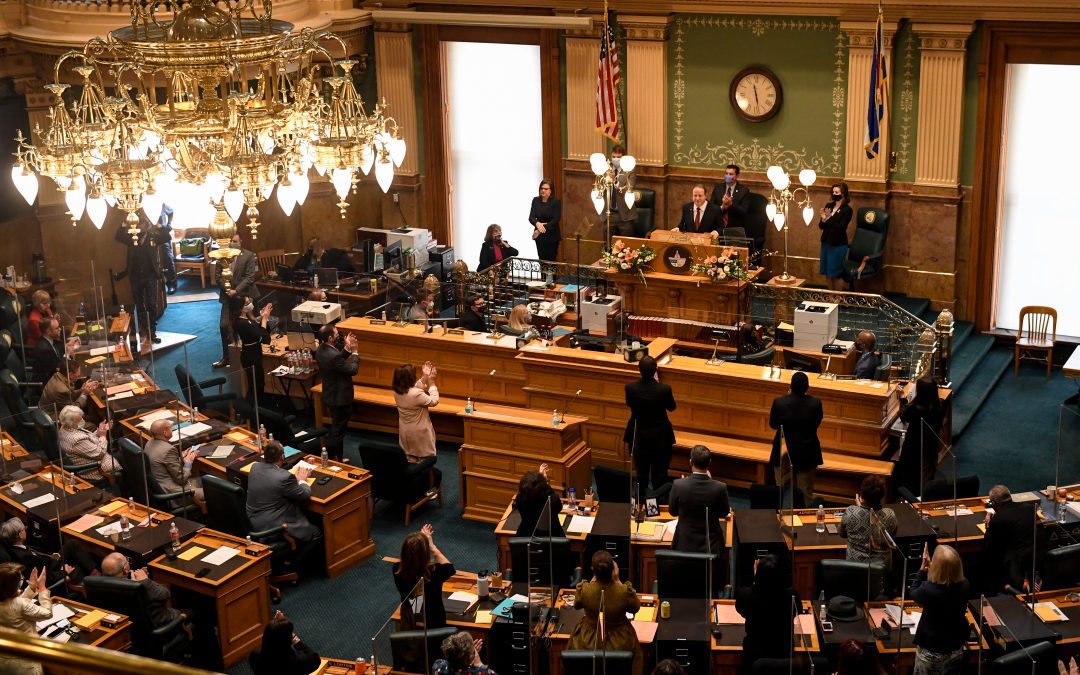 State Sen. Cleave Simpson’s southern Colorado district covers nearly 27,000 square miles, including all or part of 16 counties and 80 cities and towns. It ranges from Trinidad in the south to Pueblo in the north and from Creede in the west to Lamar in the east.

And next year, Senate District 35 and other large legislative districts like it will get even bigger.

That’s because rural Colorado lost population over the past 10 years, and an independent legislative redistricting commission will take those shifts into account as it draws new maps for the state’s 65 House and 35 Senate districts ahead of the 2022 election.

The 12-member commission, created when voters passed Amendments Y and Z in 2018, began meeting last week with a mission to set new boundaries that will be in effect for the next 10 years. Their work could decide whether Democrats retain control at the state Capitol and also could pit sitting state lawmakers against one another in contentious races.

Although the new districts will be based on yet-to-be released 2020 Census data, there are 2019 Census population estimates available for legislative districts. The Colorado Sun used the 2019 data to look at how the population changed in those 100 districts between 2010 and 2019 and to determine which districts stand to change the most.

Colorado’s overall population increased 14.5% during that period, but some areas, including Weld and Larimer counties, grew faster than areas in the northwest and southeast parts of the state.

So while Simpson’s rural district will get larger, the area of Republican Sen. Barbara Kirkmeyer’s Senate District 23 likely will shrink as the population of the 383-square-mile tract that runs along Interstate 25 from Broomfield to Windsor rose nearly 33%.

The bottom line for both House and Senate districts: Power will continue to be consolidated in the state’s 11 most populous counties. All but one, Mesa County, are on the Front Range. Colorado’s 53 rural counties could be represented by just five senators and 10 representatives, unless they’re combined with more urban areas.

Senate districts will continue to expand in rural areas, contract in metros

Based on the 2019 population estimates, Colorado’s 35 state Senate districts would end up with 160,296 people each. Seventeen of the current districts are over that threshold, while 18 are under it.

And, if 2019 county population estimates were used, 11 counties could be divided among 30 seats.

Simpson’s Senate district is the only one of the current 35 Senate districts that lost population between 2010 and 2019. He’s a Republican who lives in Alamosa, more than an hour away from Creede and nearly 3.5 hours from Lamar.

“Having responsibility for the largest legislative district in the state is problematic,” Simpson said. “How do you stay engaged with constituents?”

He said he knew the district would get larger in 2022 when he ran for the open seat last year. “Population in the rural counties I represent is either flat or generally declining, potentially. So it’s going to be more area going forward. I can’t imagine what that looks like yet.”

All the state Senate districts will increase in population.

“That’s a double whammy to those rural districts, they’re losing population but the district itself needs greater population,” said Mario Nicolais, an unaffiliated lawyer and Colorado Sun columnist who served as a Republican appointee to the 2011 commission that drew the current legislative districts.

Senate District 3 in Pueblo, for instance, now represented by Senate President Leroy Garcia, a Democrat, will also need to expand. Although the district gained nearly 5% in population over nine years, it is still more than 8% below the target for Senate districts.

All the state Senate districts will increase in population.

“That’s a double whammy to those rural districts, they’re losing population but the district itself needs greater population,” said Mario Nicolais, an unaffiliated lawyer and Colorado Sun columnist who served as a Republican appointee to the 2011 commission that drew the current legislative districts.

Senate District 3 in Pueblo, for instance, now represented by Senate President Leroy Garcia, a Democrat, will also need to expand. Although the district gained nearly 5% in population over nine years, it is still more than 8% below the target for Senate districts.

Even Senate District 19, centered in Arvada and Westminster in Jefferson County, would need to expand, likely drawing population from other, existing Jefferson County Senate districts that grew more significantly.

At the other end of the spectrum is Kirkmeyer’s district. Weld and Larimer counties had some of the highest growth rates in Colorado over the past decade, and much of that was along the I-25 corridor in Senate District 23.

Then there’s Senate District 33 in northeast Denver, which saw nearly 27% growth over nine years and is 15% over the 2019 average district population. Democratic Sen. James Coleman represents the district, which includes new neighborhoods near Denver International Airport.

Meanwhile, two sitting Democratic state senators from neighboring state Senate districts in Jefferson County are at risk of being drawn into the same district next year.

Sen. Brittany Pettersen of Lakewood and Sen. Jessie Danielson of Wheat Ridge live near each other, and both of their districts are expected to change. The two are close friends.

“It is going to be, as somebody put it, the biggest show of the year,” Pettersen said of sitting lawmakers suddenly vying for the same seat.

The most important thing is that the maps are fair, Pettersen said. “The rest can work itself out.”

The impact of redistricting may be less dramatic in the state House.

Districts would average 86,313 people based on the 2019 population estimates. Twenty-one current districts are above the average, nine are about even and 35 are below the average.

The largest district, Akron Republican Rep. Richard Holtorf’s House District 64, a 20,000-square-mile district in southeastern Colorado, is 8.4% below the average. So it’s possible that 64 and 65 will pick up population from growing urban areas, such as House District 56 in Adams and Arapahoe counties. That district, represented by Republican Rep. Rod Bockenfield, grew nearly 32% and is 20% over the average size.

The commission, as well as a companion panel that’s redrawing Colorado’s congressional maps, must take into account population, civic subdivisions such as cities and counties, and communities of interest. The initial legislative redistricting commission meeting last week included discussion of U.S. Census data-sharing delays and potential solutions, some of which include drawing preliminary maps with the most recent data.

Gayle Berry is a lobbyist and Republican who once represented Grand Junction in the House and served on the state’s 2011 redistricting commission. She recalled the creation of House District 50 in Greeley, which is a district primarily composed of Hispanic residents. In Denver and Aurora, there are majority-Black districts.

“The communities of interest, that really became a topic in 2011,” Berry said.

Those communities of interest and preventing the dilution of representation of non-white populations, along with competitiveness of districts, are also among the commission’s considerations.

The public will have an opportunity to offer input about potential districts at 21 public hearings around the state to be scheduled before the new maps need to be finalized in December.

But Berry and Nicolais recall that many who attended similar redistricting hearings to give testimony in 2011 appeared to be using the same, boilerplate language.

“Of the testimony we received on the commission, 90% of it was astroturfed by one side or another,” Nicolais said. “It was almost like they were reading bullet points.”

Another major difference for the current redistricting effort is a requirement that those being paid to influence the work of the commission disclose their compensation and who is paying them within 72 hours of being hired under state lobbying laws.

ProPublica identified influence by dark money groups in the 2011 Colorado legislative redistricting process that could be traced back to the Democratic and Republican political parties, as well as unions and other interests.

Operatives from both parties drew maps proposed by commission members, something that won’t happen in the new process. Instead, professional staff will draw proposed maps, and commission members may suggest changes only during public meetings.

“The Democrats were much better at that,” Berry said of the map drawing. “They really had people who got down into the numbers. And look what’s happened in the last 10 years. I think the philosophy of the state has shifted, but I think the Democrats made a difference in shifting those seats.”

“I want to honor the process, but I also want to know that it’s going to be honest,” Buckley said, asking, “How much of that information, if I’m contacted, is subject to” open records laws.

Nicole Meyers, a legislative legal staffer briefing the commission recently, said all communication to commissioners in their official role is considered a public record. But, she added, “You’re not required to keep those things.” If a document doesn’t exist, it can’t be subject to open-records requests.

Berry said commissioners can expect interaction from both Democratic and Republican operatives. “Both sides will do it,” Berry said. “It is the most intense politics I’ve ever been in, just because the stakes are so high.”