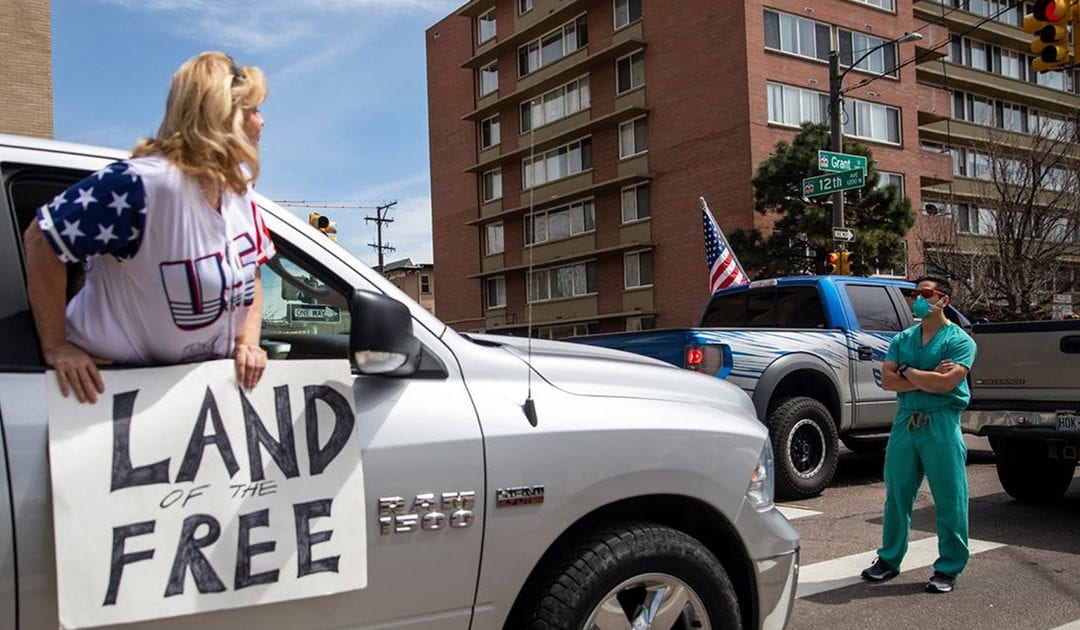 In the powerful footage, which went viral on social media, two nurses in scrubs and N95 masks faced off against horn-honking protesters in the street who were demanding an end to mitigation methods being used to fight the .

“They were blocking the roads until the police force stepped in,” photojournalist Alyson McClaran, who captured images from the event and shared them on , told the . “People were putting their cars right up against them.”

A viral video from the demonstration featured a woman wearing an American flag shirt and holding a sign that read “land of the free” as she addressed one of the medical workers in front of her.

Hanging outside of her car window, the woman yelled, “Go to China if you want communism. You can go to work, why can’t I go to work?”

The woman was one of the hundreds of protestors gathered outside the State Capitol in Denver, where over 9700 people the virus and 400 have died. According to the , the demonstrators held up signs that read “End the Virus, Not the Economy,” “We need stability to stay heal” “Don’t Tread on Me” and more.

One protester, Mary Conley of Jefferson Country, carried a sign that read, “Trust the people” and expressed that the statewide shutdown has gone on too long.

“Pot shops are open, abortion clinics are open and my church is closed,” she told the publication. “Death is a part of life and it’s time to start living again.”

As a surgeon I’m constantly reminded that Nurses are the glue that really hold everything together.

Proud of these 2 RN’s in Colorado who stood up to peacefully protest people not abiding by stay-at-home orders. #CoronavirusUSA #COVIDー19 #TogetherAtHomepic.twitter.com/7CpbiVYwbG

A Denver nurse named Alexis, who chose not to provide her last name, called the protest “a slap in the face to medical workers” and “backwards,” while speaking with the city’s affiliate.

“I don’t want to be stuck in my house either,” she added. “I don’t think many people at all are enjoying this. That’s not the point.”

The incident came two days after appeared to encourage people to protest against stay-at-home orders when he about liberating Minnesota, Michigan and Virginia.

As of April 20, the coronavirus (COVID-19) than 2.4 million confirmed cases and has killed more than 167,000. Originating in Wuhan, China back in December, the coronavirus has spread to at least 200 other countries and territories. In the US, more than 760,000 have contracted the virus and 40,000 have died.

Got a story or a tip for us? Email TooFab editors at tips@toofab.com.