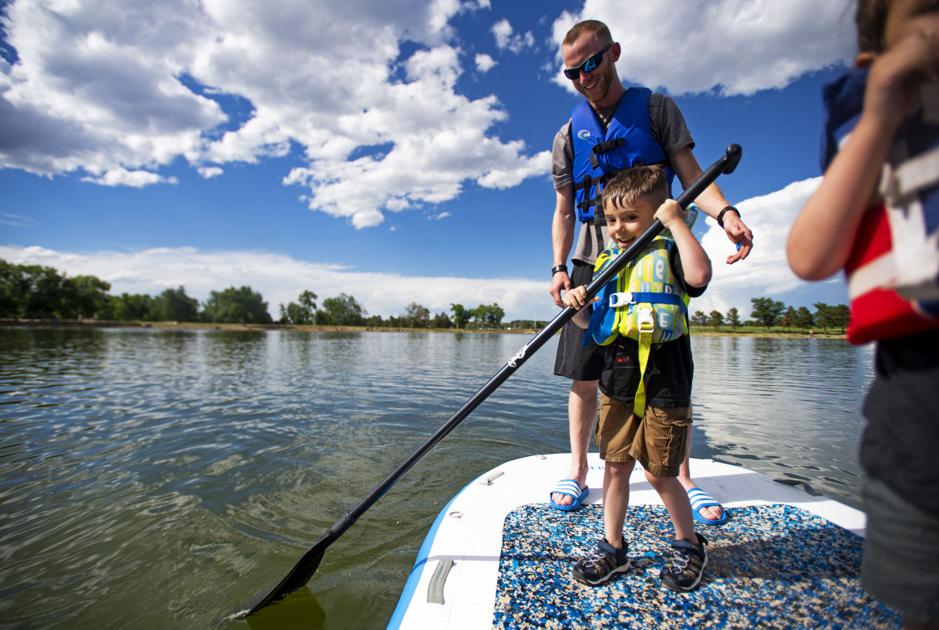 A 2019 report alarmed anyone believing in the power of the outdoors.

America was becoming an indoor nation, the study by Outdoor Foundation suggested, with findings such as this: Less than 20% of Americans recreated outside once a week. Researchers found outdoor time among kids was down 15% in six years. The study also laid out disparities among people of color and in lesser privileged homes.

A weekend visit finds kids and parents aplenty taking advantage of the water and surrounding picnic tables, pavilions, playgrounds, sport courts and fields. The lake is the centerpiece of Memorial Park, just east of downtown.

A crew from Even Preisser Inc. lays a new entrance to the Erin R. Jaspersen Beach House on Prospect Lake in Memorial Park Monday, April 12, 2021, as part of the redesign project that began in 2018. The project was funded in part by grants by Great Outdoors Colorado. The beach house is targeted to open Memorial Day Weekend and will include a beach volleyball court, a lit patio, public spaces and a hammock zone. A concessioner will sell food and beverages. (The Gazette, Christian Murdock)

These 196 acres are something of a local melting pot — a breath of fresh air for advocates all too aware of equity issues in the state’s outdoors. Locals choose Prospect Lake as a place to introduce kids to fishing and stand-up paddleboarding.

With ongoing renovations, the city parks department aims to make a true hub of the beach house here. At last visit, this is where we parked and started the loop trail around the lake.

The opposite shore boasts views of Pikes Peak and signature promontories of the lower range, from Cheyenne Mountain to the south and Blodgett Peak to the north. Runners, dog walkers and parents with strollers commonly take multiple laps. Others opt to ride their bike around. Don’t have one? The city’s bike share program, PikeRide, posts wheels near the beach house.

Fishing on Prospect Lake near downtown Colorado Springs, with Cheyenne Mountain seen in the background. Photo by Seth Boster, The Gazette

All are greeted by the lake’s resident birds. One recent afternoon, a great blue heron put on a show hunting for fish.

The boat launch is on the northwest corner of the lake, where permitted kayakers and water skiers take off. Anglers with licenses are pointed to the southeast and northeast sides of the lake.

Getting there: Beach house at 619 Prospect Lake Drive