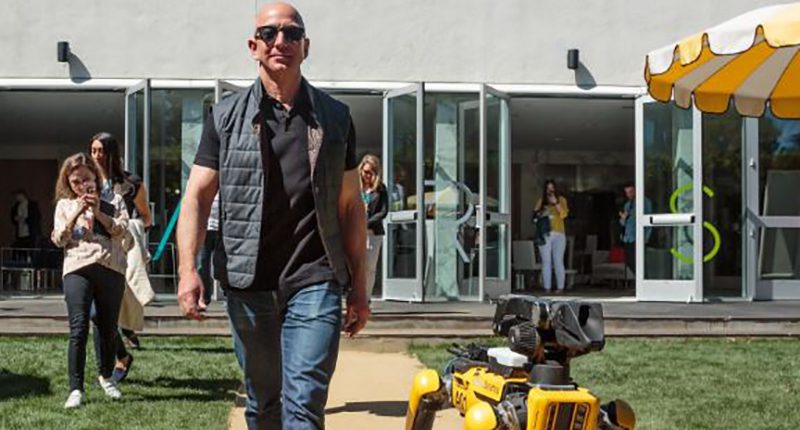 “Absolute bullsh*t. With the amount Jeff Bezos makes in one day, he could shut stores down and pay employees to stay safe.”

When progressives like Sen. Bernie Sanders say “now is the time for solidarity” amid the coronavirus outbreak, they likely do not mean that employees of Whole Foods—owned by the world’s richest man, Jeff Bezos—should be asked to give their own accrued paid sick days to their co-workers who have either contracted the deadly virus or been forced to take time out of work because of what is now a global pandemic.

But that is exactly what executives with the grocery chain are asking its employers to do, even though Bezos’ could effectively give them unlimited paid sick leave during the current national emergency without barely a scratch in his bank account.

In a letter sent to employees earlier this week, Whole Foods CEO John Mackey explained that one of the options available to workers was for them to “donate” their “paid time off” (pto) days to a pool that other workers could draw from.

Journalist Lauren Kaori Gurley, who broke the story with reporting for Motherboard, notes that “as a subsidiary of Amazon, the world’s biggest company, Whole Foods could easily afford to pay its hourly employees for sick days taken during the coronavirus outbreak without breaking the bank. Instead, the company has put the onus back on workers, and they’re not happy about it.”

In Mackey’s letter reviewed by Motherboard, the executive stated: “Team Members who have a medical emergency or death in their immediate family can receive donated PTO hours, not only from Team Members in their own location, but also from Team Members across the country.”

Though such labor practices are not unusual—with workers in various sectors and industries pooling accumulated sick leave for a colleague experiencing a long-term illness—doing so in the face of a global pandemic, in which all members of society are equally at heightened risk, the move was seen by critics as shortsighted, tone deaf, and cruel. The fabulous wealth of Bezos only increased the ire for many.

If I were a billionaire right now, Iʻd “hire” and double the wage of any Whole Food employee who is willing to simply stay home for a few months. Itʻs hard to understand this grotesque level of greed. https://t.co/moGo7XZSWR

“Runaway capitalism is when Whole Foods suggests employees trade vacation time to address coronavirus rather than offer paid leave, all while the CEO rakes in ~$15 million a year in stocks, benefits, and more,” said Trish Zornio, a Democrat running for the U.S. Senate in Colorado this year.

“You’ve got the richest man in the world asking people who are living paycheck to paycheck to donate to each other,” Matthew Hunt, a former Whole Foods employee who led a drive to unionize Whole Foods workers, told Motherboard. “That’s absolute bullshit. With the amount Jeff Bezos makes in one day, he could shut stores down and pay employees to stay safe.”

… then let us make a small request. AlterNet’s journalists work tirelessly to counter the traditional corporate media narrative. We’re here seven days a week, 365 days a year. And we’re proud to say that we’ve been bringing you the real, unfiltered news for 20 years—longer than any other progressive news site on the Internet.

It’s through the generosity of our supporters that we’re able to share with you all the underreported news you need to know. Independent journalism is increasingly imperiled; ads alone can’t pay our bills. AlterNet counts on readers like you to support our coverage. Did you enjoy content from David Cay Johnston, Common Dreams, Raw Story and Robert Reich? Opinion from Salon and Jim Hightower? Analysis by The Conversation? Then join the hundreds of readers who have supported AlterNet this year.

Every reader contribution, whatever the amount, makes a tremendous difference. Help ensure AlterNet remains independent long into the future. Support progressive journalism with a one-time contribution to AlterNet, or click here to become a subscriber. Thank you. Click here to donate by check.