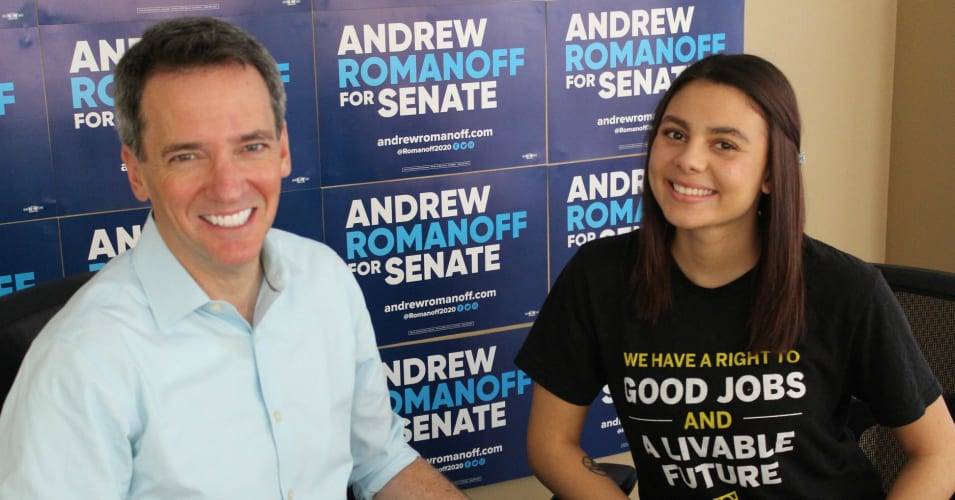 In a pair of tweets Saturday night, Romanoff declared: “Our grassroots campaign just crushed the D.C. machine and won today’s caucuses! The powerbrokers and party bosses in Washington didn’t get the memo, but it turns out a lot of people in CO want to replace Cory Gardner with a progressive champion. Thank you!”

“We won the caucuses; now we need to win the primary,” Romanoff added. “It won’t be easy—the political establishment is hellbent on crushing our grassroots insurgency. Will you help us fight back?”

Romanoff, a progressive favorite, won 55% of the raw vote and Hickenlooper won 31% with 55 of 64 counties, including Denver, reporting late Saturday, according to the Colorado Democratic Party. However, several counties will not report their results or the number of delegates won by candidates until Sunday.

Precinct caucus results will determine the number of delegates that candidates have at upcoming county caucuses. Results there will determine delegate counts at an April 18 state assembly, where candidates will need at least 30% support to have their names placed on June 30 primary ballots.

The caucus is one of two ways to get on the Senate primary ballot—candidates also can do so by gathering signatures—and only about half attempted the caucus route. Low turnout at Saturday’s precinct gatherings amid the coronavirus outbreak had some Democrats discussing whether the tradition should continue.

While Romanoff’s platform includes a wide range of progressive priorities, he has campaigned as a champion of the Green New Deal and emphasized the importance of tackling the climate crisis. As the candidate’s website explains: “A catastrophic rise in greenhouse gases. An administration consumed by chaos and scandal. An economy that leaves millions of us behind. We’re running out of time to rescue our planet, repair our democracy, and restore the American Dream. That’s why I’m running for the U.S. Senate.”

“Climate change is a top issue for Colorado voters and the results of the caucus were a referendum on Hickenlooper’s climate record and whether Coloradans want a senator who backs the Green New Deal,” said Weindling. “In a state where politicians have put the profits of oil and gas CEOs above our health and safety, Colorado proved that Hickenlooper’s record supporting the fracking industry is politically toxic and voters are ready for change.”

For months, the establishment wrote off @Romanoff2020. Tonight voters delivered them a wake-up call.

Turns out cozying up to gas lobbyists doesn’t play well in a state where the fracking industry has been skirting the rules and polluting people’s air & water. #CoSen #Copolitics https://t.co/5AtghNMQoM

“For months, the media and political establishment wrote off Andrew Romanoff,” Sunrise Colorado spokesperson Nick Tuta said Saturday. “But tonight showed that this is going to be one of the most hotly-contested Senate contested races in the country. It’s clear that the same movement that powered Bernie Sanders to victory last week is ready to take on Hickenlooper and the DSCC. If the establishment continues thinking this is a done deal, they’re going to be in for a shock on June 30th.”

Hickenlooper, for his part, “downplayed the importance of caucuses,” according to the Denver Post. The former Democratic Presidential primary candidate reportedly said at his precinct caucus site Saturday: “The only ballot that really matters in determining who the candidate is going to be representing Democrats in the Senate race is the one that happens June 30. That’s where I have to win.”