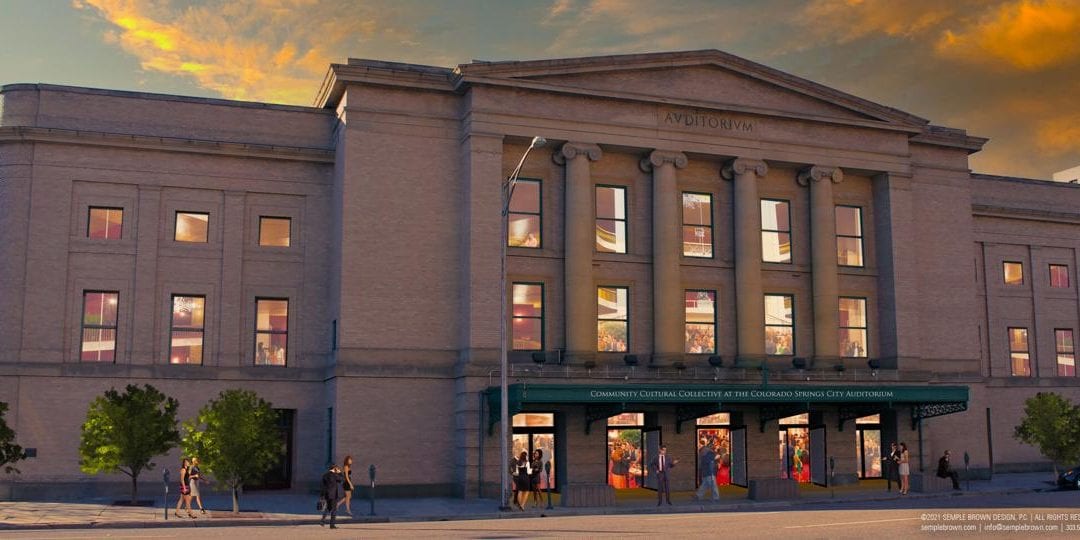 A grand vision for the Colorado Springs City Auditorium is in the works to transform the nearly 100-year-old building into a hub for the arts, culture and education.

The renovation could require almost $60 million and would nearly triple the square footage of the building, making room for a restaurant, a speakeasy-style bar, rehearsal space, offices for nonprofits and renovated performance venues, among other additions, said Linda Weise, the CEO of the Colorado Springs Conservatory. Weise is planning to leave her job to head up a new nonprofit dedicated to managing the effort.

She sees the remodel as a way to revitalize the “beautiful little goddess on the corner” while leaving the historic aspects in place, including the façade and indoor murals.

The plan for the building and the newly formed nonprofit, the Community Cultural Collective, will be presented to the El Paso County commissioners Tuesday as part of the fundraising campaign. The city and county are slated to receive more than $200 million from the American Rescue Plan Act passed to help the economy rebound from the pandemic, and a portion of those funds could be used to help support the arts. The nonprofit also plans to do significant private fundraising and apply for tax credits.

The city has tentatively earmarked $2.5 million out of its recovery funds to support the project, although the details of how that money might be spent have not been determined, said Bob Cope, economic development officer for the city.

The Community Cultural Collective expects to manage operations and potentially take over ownership of the building from the city in order to secure funding for the renovation, Weise said. The city would not qualify for some of the same financial options like tax credits that the nonprofit would, Cope said.

“It’s really a way to bring life back into the city auditorium,” Palus said, of the proposal.

Most recently the building was used as an isolation center for homeless residents with COVID-19 and previously hosted roller derbies, metaphysical fairs and community events.

The building has been in need of updates for years, and a recent city study found parts of the ceiling are falling off and the balcony seats are nearly 100 years old and unusable.

“We have been looking for a solution for 40-plus years,” Weise said.

In 2004, Weise floated a plan to renovate the building that didn’t gain traction. Since then, the city’s downtown has become far more vibrant with the opening of the U.S. Olympic and Paralympic Museum, the new Switchbacks stadium and new housing complexes.

Colorado Springs Conservatory CEO Linda Weise plans to leave her job to run a newly formed nonprofit that plans to manage and redevelop the city auditorium.

“The city is ready now,” she said.

Weise also has developed a diversified business model for the new venue that will include revenue from tenants, education, bookings for concerts and conferences, among other sources. She would expect the building to be busy 20 hours a day, seven days a week with activities and performances.

To update the building, crews may take off the auditorium’s roof to add new second and third floors filling currently unused space with rehearsal studios, office space and room for a large banquet hall. The square footage would be expanded from about 31,000 to about 90,000.

The main performance and gym area would be remodeled into a modern venue with seating for 600, down from about 2,400. The gym floor would come out and an orchestra pit could go in. Mechanized seating that rolls into the wall could free up the floor to allow a standing event or tables.

An addition on the back of the building would house dressing rooms and space to work on sets and lighting, a necessary area the building is currently missing altogether, Weise said.

The plan to renovate the Colorado Springs City Auditorium would add a second and third floor for rehearsal, office and banquet space among other uses. An addition on the back of the building would house needed backstage space with dressing rooms and other necessary space. A portion of the basement could be turned into a speakeasy style bar.

The small theater, which currently seats about 230 people, would be moved from the east side of the building to the west side to free up space for street-facing businesses, like a restaurant.

The community now has a stadium to host its largest shows, and as a mid-sized venue, the auditorium would fill a gap in the community by hosting performers on their way to the Ogden Theatre in Denver and drawing mid-size conferences, she said.

The nonprofit collective also expects to provide shared services for nonprofit tenants such as marketing and information technology to help offset overhead costs. The Conservatory is planning to be a core tenant on the third floor. The nonprofit’s chief operating officer, Scott Marble, is expected to lead the Conservancy as interim CEO after Weise’s departure.

In the first phase, the nonprofit expects to need $5 million to plan the renovation. The building is likely to need extensive asbestos abatement and updates to the 100-year-old plumbing, Weise said.

In addition to city and county funding, the auditorium could see federal, state and private investment. Fundraising from private sources could account for more than $20 million of the project.

“So many in the philanthropic world want to come alongside the city to make it happen,” she said.

She estimates the building could be operational in 2024.

City Council President Tom Strand said the board was familiar with the proposal, but he couldn’t say whether they support transferring ownership yet.

“We would obviously look for a recommendation from the mayor,” he said.

However, Strand said the building clearly isn’t achieving its full potential in its current state and that it could use considerable updating.

If the city did give the property to the new nonprofit, he would like to see protections that would ensure if plans fall through or operations cease someday, the city could regain ownership.

A formal hearing on the proposal hasn’t been scheduled, so he couldn’t say when the council might make a decision.