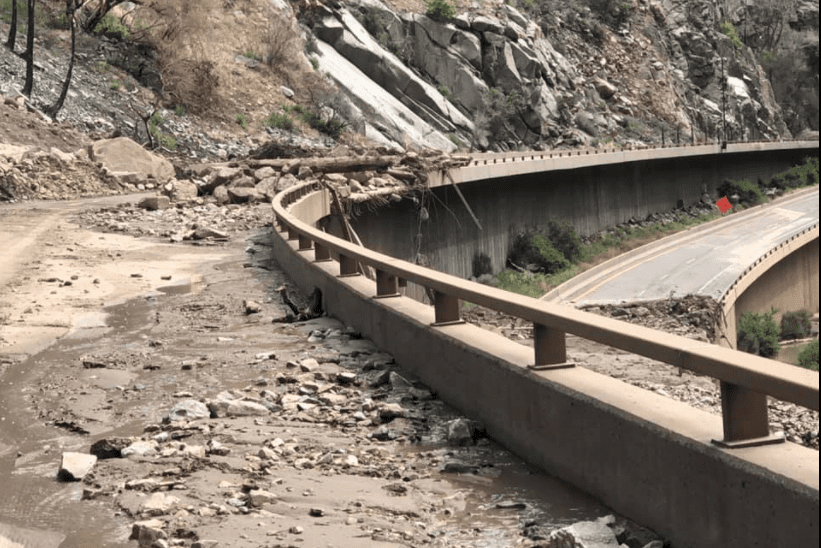 The canyon has been closed since around 9 p.m. on July 29 due to mudslides that have caused extensive damage to I-70. The interstate was open sporadically before that, also due to torrential rains and mudslides.

No date has been set for reopening the highway; Polis said during a Monday press conference it could be days or weeks. Garfield County Commissioner Tom Jankovsky told lawmakers on a legislative wildfire committee on July 29 that based on information from a hydrologist with the Bureau of Land Management, mudslides are expected to be a regular problem for the next five to ten years.

I-70 is currently closed from exit 116 at Glenwood Springs to exit 133 at Dotsero. Several detours are available; truckers outside of Colorado are being advised to take I-80 north of Colorado. Truckers coming into Colorado, east to west, are advised to take a north detour route beginning at Colorado 9 in Silverthorne, traveling north to U.S. Highway 40 and over Rabbit Ears Pass to Steamboat Springs, and then west to Colorado 13 which reenters I-70 at Rifle. The west to east route is the reverse.

A south detour, using US Highway 50 from Grand Junction, goes through Montrose and Gunnison, eventually linking with U.S. Highway 285 and back into the Denver area. The Colorado Department of Transportation has postponed a road project between Montrose and Gunnison while the detour is needed.

According to a statement from the governor’s office, the disaster declaration authorizes the use of the Colorado National Guard for traffic control and debris removal. It also “activates the State’s Emergency Operations Plan and enables State agencies to better coordinate their response while also providing additional funds to respond to the damage and repairs needed in areas affected by burn scar flooding and slides.”

Some of the worst damage, surveyed by a drone Monday, shows the Hanging Lake tunnel and surrounding area covered by debris; in some spots the debris has covered both the upper and lower decks of the highway and are threatening the railroad lines across the river from the highway. The Colorado River is also getting clogged with debris.

Polis said Monday he has activated the State Emergency Operations Center. CDOT has formed an Incident Command (IC) team to manage roadway operations for the incident, a model the governor’s office said was successfully utilized in major incidents like the 2013 floods.

“The I-70 corridor through Glenwood Canyon is critical to Colorado’s economy and necessary for Coloradans to swiftly move around the state. Glenwood Canyon plays a major part in the daily lives of communities across the Western Slope as well as in moving our supply chain across the state, supporting our outdoor recreation industry, and so much more. This disaster declaration will help to deploy more resources to clear the canyon and ensure Colorado prepares for future disasters that may impact this critical juncture on I-70,” Polis said.

The statement also noted that between June 26 and July 28, CDOT closed I-70 through the canyon 12 times due to five flood events and flash flood warnings. Polis said Monday that 4 inches of rain fell before the closure on July 29; the average rainfall for the entire month is usually 2.4 inches.

The executive order issued by Polis said the July and early August storms “have caused considerable damage to at least four discrete structures in the canyon, and CDOT may discover more as debris is removed from the affected areas. The recent interim closures and the current indefinite closure have strained local, state, and federal supply chains and economies.”

The order also says all repairs that occur in Glenwood Canyon are interconnected and need to be coordinated closely” with local, county, state and federal stakeholders, including the U.S. Forest Service and Union Pacific Railroad. In addition, the order said, “CDOT has directed all of its efforts to reopening the highway and protecting the water resources and infrastructure affected by the floods and slides. It has assigned maintenance crews to monitor slide areas, establish traffic control points to keep the public safe, clear the mudslides and debris flows from the highway, inspect the highway for damage, and repair any infrastructure.”

Polis issued a disaster declaration for the Grizzly Creek fire on September 9, 2020, freeing up state funds to help fight the fire.