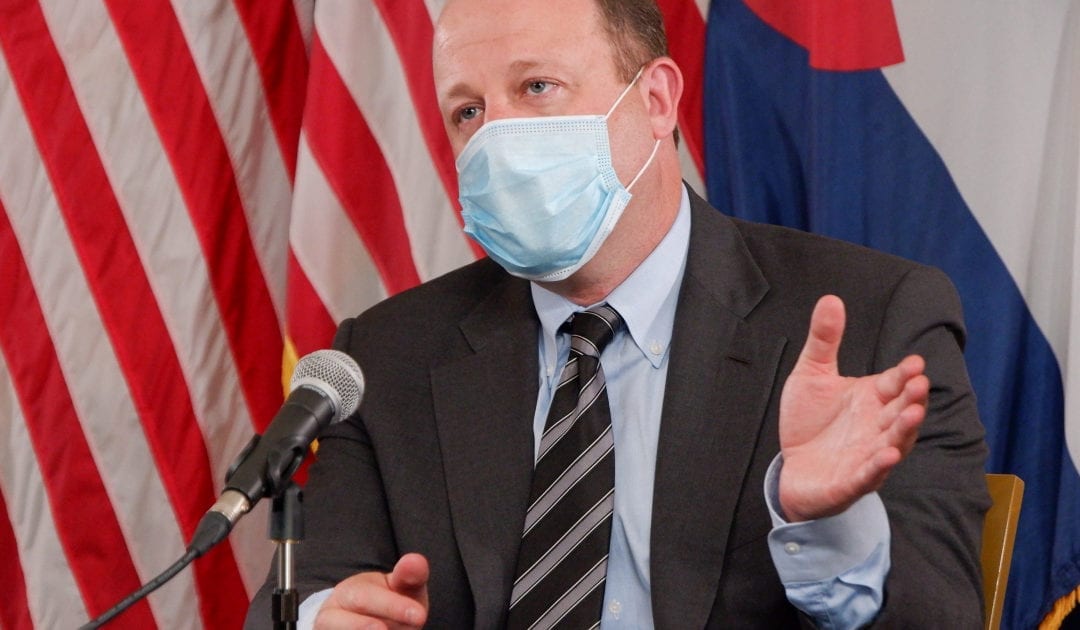 A Republican-authored measure to cut Colorado’s state income taxes amid the economic crisis may have an unlikely ally when it appears on the November ballot: Democratic Gov. Jared Polis.

In a brief interview with The Colorado Sun, Polis praised the intent of Initiative 306, a ballot measure that would permanently reduce the state income tax rate to 4.55% from 4.63%. But he stopped short of an outright endorsement.

“We’ve long sought an income tax decrease,” Polis said after a recent event on reopening schools. “We obviously preferred that it was revenue neutral. But particularly in this challenging time, I think Coloradans certainly need tax relief.”

Conor Cahill, a Polis spokesman, declined to elaborate on the governor’s thinking, saying in a statement: “The governor will discuss his observations on whether the various ballot initiatives are good, neutral, or bad for Colorado after the ballot is set.”

The Secretary of State’s Office announced Aug. 17 that supporters of the tax measure submitted enough voter signatures to qualify for the 2020 ballot.

It’s not the first time Polis praised efforts to lower taxes, even as top lawmakers in his own party and allied advocacy groups look for ways to increase them to meet demands for state services. In the past, Polis has said an income tax cut should be offset within the budget by eliminating tax breaks that benefit large corporations, but his plans stalled when the pandemic hit.

The governor’s supportive remarks about this year’s ballot measure to lower taxes drew strong reactions from both sides of the aisle, and served as yet another illustration of Polis’ independent streak when it comes to tax policy in Colorado.

The proponents of Initiative 306 say Coloradans need financial relief during what could be the nation’s worst economic crisis since the Depression.

“The state should have to tighten its belt as well,” said Sen. Jerry Sonnenberg, a Sterling Republican, who worked with the conservative Independence Institute to bring the measure to the ballot. “There’s people that have been out of work, businesses that have not been able to function during this time. They need help as well. What better way to do that than reduce their income tax, allow them to keep more of their own money.”

Opponents say it would only make things worse. The tax cut would reduce state revenue by an estimated $158 million in the 2020-21 fiscal year and $169 million the following year, at a time when the state is facing huge budget deficits. Many economists, including the chairman of the Federal Reserve, have warned that the budget woes of state and local governments across the country will deepen the economic crisis.

“Our read is that the average Coloradan’s going to get 40 bucks worth of a tax cut and probably lose hundreds of dollars of public services that they count on to afford schools, higher education and health care,” said Scott Wasserman, president of the left-leaning Bell Policy Center, which opposes the tax cut. The center backed a tax hike on the wealthy but fell short of qualifying for the ballot.

Polis pledged to lower the state’s income taxes when he ran for office in 2018, a move that helped blunt Republican criticism about the billions in new government programs he wanted to create. He’s pushed an expensive policy agenda, calling for massive new public investments in full-day kindergarten and health care. And at the end of the 2020 legislative session, Polis was instrumental in getting a tobacco tax hike onto the ballot that’s expected to raise $173 million next fiscal year.

But his stance on tax policy has frustrated the political left. Polis touted an automatic tax cut triggered last year by the Taxpayer’s Bill of Rights that reduced the rate to 4.5%, a temporary reduction that’s set to expire at the end of this year. He has repeatedly called to go further and permanently cut income taxes at a time that top legislative Democrats believe the state needs more revenue for public services.

At the end of this year’s legislative session, Polis helped business groups water down a Democratic bill that would have capped a popular tax deduction that disproportionately benefits wealthier Coloradans. And he largely sat out last year’s failed campaign to eliminate taxpayer refunds in order to increase spending on various public services.

“I’m still hopeful that the governor will come out with full support,” Sonnenberg said. “This is something that he’s campaigned on, and he talked about for a couple of years.”

“I think the question for everyone who’s behind this measure is what else do you want to cut?” he added.

Sonnenberg did not identify specific cuts that would become necessary if the measure wins voter approval, but he insisted there was still fat in the state’s budget to cut, even after the unprecedented $3 billion reduction in spending the state made earlier this year. In particular, he suggested that a bill to allow state employees to collectively bargain as a union was an unnecessary expense.

“I’d have to dig the budget back out — but obviously this last year, when you had to make drastic cuts and you spend $8 million to (allow collective bargaining), that’s something that you don’t spend money on when you’re in tough times,” Sonnenberg said.