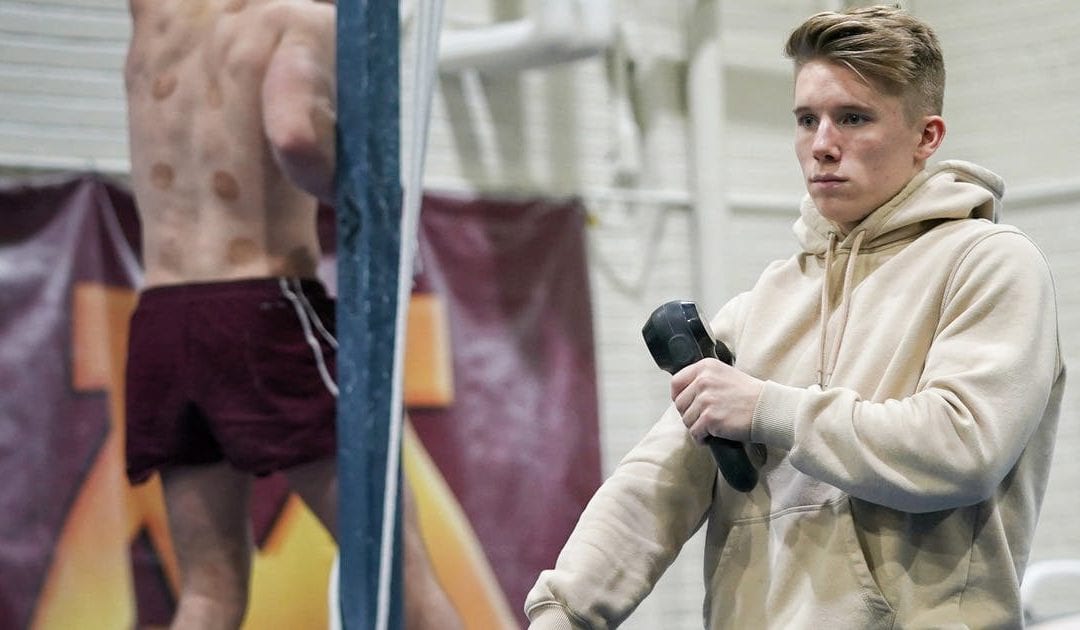 To Shane Wiskus, the Cooke Hall gym always felt like a place of infinite possibility. The Gophers gymnast thrived in that 86-year-old space, blossoming into an NCAA and U.S. champion inside its cramped, chalk-crusted walls.

He intended to chase his next dream — a spot on the team for next summer’s Olympics — in the same modest setting. Then U officials announced in September they would eliminate men’s gymnastics after this season. With no assurance he could keep training at Cooke Hall next spring, and no teammates to work out with, Wiskus faced a sudden, sorrowful choice.

“The Gophers have been given just days to move out of the gym after the NCAA championships [in April],” he said. “Even if they let me train there, I would have been all by myself. So I had to look for an alternative.”

Friday, Wiskus and his father, Mike, will load a truck and trailer for a trip they weren’t ready to make. Wiskus is moving to Colorado Springs, where the U.S. Olympic Training Center will become his new gymnastics home.

The senior from Spring Park will join an elite training group of nine men preparing for the Olympic trials in June. He will finish his degree in business and marketing education via distance learning, and with the Gophers preparing to hold some meets virtually, he can still compete for them remotely from Colorado. Should the NCAA championships be held as scheduled April 16-17 at Maturi Pavilion, Wiskus could finish his Gophers career with one final performance at the Pav.

A member of the U.S. national team, Wiskus expected to eventually relocate to Colorado Springs for post-college training. He just wishes it didn’t have to happen so soon.

“It will be a good training environment,” said Wiskus, a two-time Big Ten gymnast of the year and the 2019 NCAA champion on parallel bars. “If I was going to have to move in the spring, I figured I might as well do it now, so I can adjust to the elevation and everything else.

“It’s going to be very hard to leave my teammates, my coaches, my family and friends. I really wanted to stay with my team. I took a lot of time to think about it. But my priority now is making the Olympic team, and this is the best option.”

Wiskus already lost most of his junior season to the pandemic, competing in only four college meets last winter. He ended the abbreviated schedule as the nation’s top-ranked all-arounder, after finishing as the NCAA silver medalist in all-around as a freshman and sophomore. The 2019 U.S. champion on vault, Wiskus also made the five-man U.S. team for the 2019 world championships, putting him among the top contenders for the Olympic team.

Gophers assistant coach Kostya Kolesnikov serves as Wiskus’ personal coach. They planned to continue working together at Cooke Hall until the Olympic trials, then toward the Summer Games if Wiskus made the team for Tokyo. In Colorado Springs, Wiskus will stick with Kolesnikov’s training regimen; Andriy Stepanchenko, who coaches U.S. Olympian Sam Mikulak at the training center, also will work with him.

Wiskus was hurt and angry when Gophers athletic director Mark Coyle eliminated men’s gymnastics, men’s tennis and men’s indoor track and field, citing financial and Title IX concerns. Gophers head coach Mike Burns worried about the emotional toll on his athletes, particularly as Wiskus prepared for the most important meets of his life.

He is on board with Wiskus’ relocation, though not having him on campus for the Gophers’ final season just adds to the pain.

“I hate the idea of tearing Shane away from his team,” Burns said. “But he has a lot of support from his teammates, and he’s at a point where he needs to make some upgrades to his routines.

“We have a subpar facility here. I mean, we’ve made it work, but we can’t even vault in Cooke Hall. He has to walk five blocks to Peik Gym for that. Shane knows what he needs to do to be ready for the Olympic trials, and [the Olympic training center] is a great facility.”

Since the cuts were announced, Burns said he has moved through a variety of emotions — anger, sadness, shock, disillusionment — and feels like something has been stolen from him. Wiskus, too, went through a long period of time when he felt “robbed,” by the pandemic and by the U killing off a program he has loved since childhood.

Wednesday, he will practice for the final time at Cooke Hall. Thursday, before Thanksgiving dinner with his family, he will gather with his teammates to say goodbye.

All of them have been “super supportive,” Wiskus said. Still, he expects a tearful week as he leaves the state where he has lived his entire life.

“Right now, I’m trying to keep my focus on the things right in front of me, the reasons why I’m moving,” Wiskus said. “I feel like there will be a little bit of a delay before it hits me for real.

“It was my dream to be a Gopher, to represent the state I grew up in. And my teammates are like family to me. It’s going to be very hard. But I look back at all the amazing experiences I had, and I’m very grateful.’’