GOP Rep Grabs AR-15 Kept in His Office, Dares Biden & O’Rourke To Start Confiscation with Him 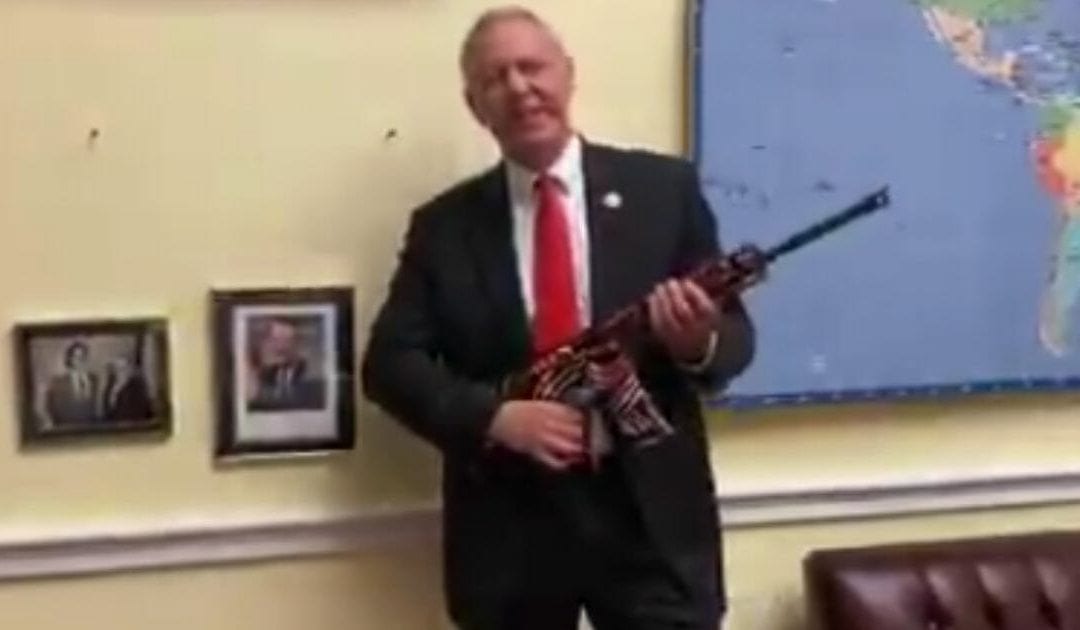 With the 2020 election heating up, Democrats seem determined to run on unpopular, even radical, gun control policies, including the banning of sporting firearms like popular AR-15 rifle.

Fortunately, there are more than enough folks willing to take a stand against such policies.

On Friday morning, Buck posted a short video in support of the Second Amendment from his official Twitter account.

“I have a message for Joe Biden and Beto O’Rourke,” Buck said in the video.

“If you want to take everyone’s AR-15 in America, why don’t you swing by my office in Washington, D.C., and start with this one.”

Buck then took an AR-15 rifle with an American flag paint scheme off the wall, where it had been hanging, and posed with it.

“Come and take it,” Buck said.

At a campaign rally in Dallas, Texas, the night before Super Tuesday, Biden brought on stage none other than former Texas congressman and failed Senate candidate Beto O’Rourke, who ended his presidential bid late last year when it failed to gain momentum.

After O’Rourke endorsed Biden at the rally, Biden took the mic and announced to the crowd, “I want to make something clear, I’m going to guarantee you this is not the last you’ve seen of him.”

O’Rourke previously made headlines for the anti-“assault weapons” statement he made at a debate last year, when he famously said, “Hell yes, we’re going to take your AR-15, your AK-47! We’re not going to allow it to be used against fellow Americans anymore!”

Though mass shootings with rifles are horrific, they are also extraordinarily rare. Data from the FBI has all but proven that sporting rifles, like the AR-15, are used infrequently in homicides.

And confiscating them would likely result in no reduction in violence — those bent on causing harm would likely find a way to do so, while law-abiding Americans would not.

Yet many anti-gun advocates believe no one should be able to legally own an AR-15.

But the reason why people would want to own an AR-15 or a gun like it is so simple, it hardly needs explaining.

These sorts of rifles increase one’s safety: The power is greater, the range is further, the bullet capacity is higher and the accuracy is finer. If defending one’s family and home, who would not want those odds stacked in their favor? (Though it’s worth noting, as a Buck spokesperson told Business Insider, that the rifle in his office is “completely inoperable.”)

And as for the argument against so-called “high-capacity” magazines, bear in mind that every bullet in such magazines is like your chances to win the lottery — one more chance to protect, to defend and to save life.

If you and your family were under attack, how many chances would you like? Ten? Twenty?

An extended clip could provide 30 chances. How many bullets is your life or the lives of your loved ones worth?

If anti-gun activists truly believe that confiscation is a necessary and worthwhile goal, they had better be prepared to argue against the value of life itself. Because gun rights are not just civil rights, they are basic human rights.

It took thousands of years, countless lives and the inspiration of technology to finally create an uneasy equilibrium for mankind to protect itself from itself.

Perhaps anti-gunners know a way, heretofore unknown, of controlling human viciousness. But consider that even in prison, where needs for food, shelter, health care, recreation and safety come in a gun-free environment, the violent still control the violence.