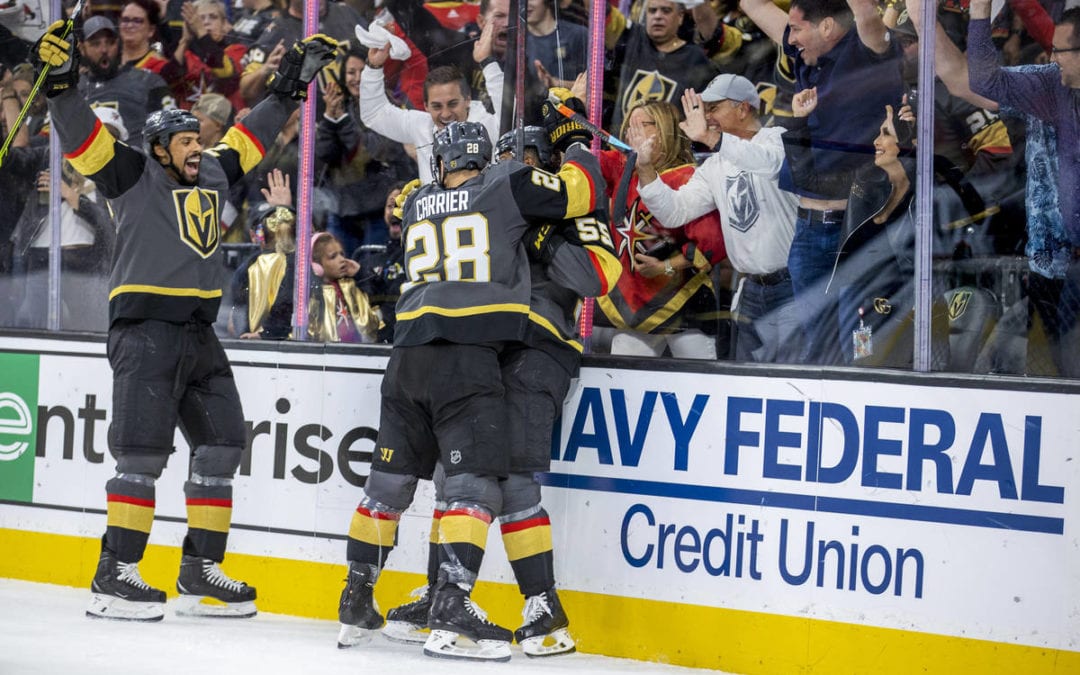 Depth. The concept has been a common thread of media zoom calls with the Golden Knights all season.

Depth. A popular quality of teams that often win big in sports.

Depth. Why the Knights on Thursday night sent the Colorado Avalanche marching off into summer vacation.

It ended with a 6-3 win in Game 6 at T-Mobile Arena, the Knights clinching this West Division final before a screeching 18,149.

Next up: A best-of-seven against Montreal in a seminal series of which the winner will advance to the Stanley Cup Final. Game 1 against the Canadians is Monday night in Las Vegas.

“The identity of our team is its depth and the number of contributions we are getting from our team,” said Golden Knights coach Pete DeBoer. “You don’t beat a team like Colorado without that. We don’t have the superstar power that they do. We’re the sum of our parts.”

It’s why they are still alive, why they rallied from two games down to win the series, why for the third time in four years, the Knights have advanced to the semifinal round.

Nick Holden is a defenseman who has been in and out of the lineup. He scored less than a minute after Colorado took a 1-0 lead in the opening seconds of the first period.

Keegan Kolesar is a fourth-liner who has been in and out of the lineup. He scored his first career playoff goal to give the Knights a 3-2 lead.

Fourth-line forward William Carrier is always in the lineup. He had six goals this season. He scored to make it 5-3.

“We have a lot of guys who buy into their roles,” said Knights captain Mark Stone. “It’s pretty awesome to see those guys rewarded. They have been soldiers for us all year. That’s what it takes to beat a team like that.

Perception will be different to begin this next series than it was against Colorado. Which, as we just witnessed over six games, means about as much as the color of helmets the Knights wear.

(I will take this moment, however, to remind you that they haven’t donned those hideous gold buckets in these playoffs and are one of just four teams remaining. So there.)

The Knights will enter a prohibitive favorite — in the minus-450 range — against Montreal.

They were also supposed to beat Dallas in the semifinals last season. The Knights were favored in every game.

They lost in five.

It means the usual, that hockey playoffs are less certain than who might next crank that T-Mobile siren before the puck drops. Montreal has advanced by winning seven straight playoff games and hasn’t trailed in any of them. Whatever that means this time of year.

All of it will soon to be determined, the Knights having again marched deep into the intense enigma that can be an NHL postseason.

Until then, we are left with the vision of another handshake line, of pats on the back for a series well contested, of a Knights team that ultimately got the best of one thought the best.

But the Avalanche weren’t. Not over six games.

Not when it mattered most, when surviving hung in the balance.

Not when everything was at stake.

The Knights were superior. For it, they play on.

“I don’t think there was a person in the hockey world when we were down 2-0 that would predict we would finish this off at home in six,” DeBoer said. “That was real. There was a lot more talk about us being swept and embarrassed and could we even win a game.”

Won four of them, actually.